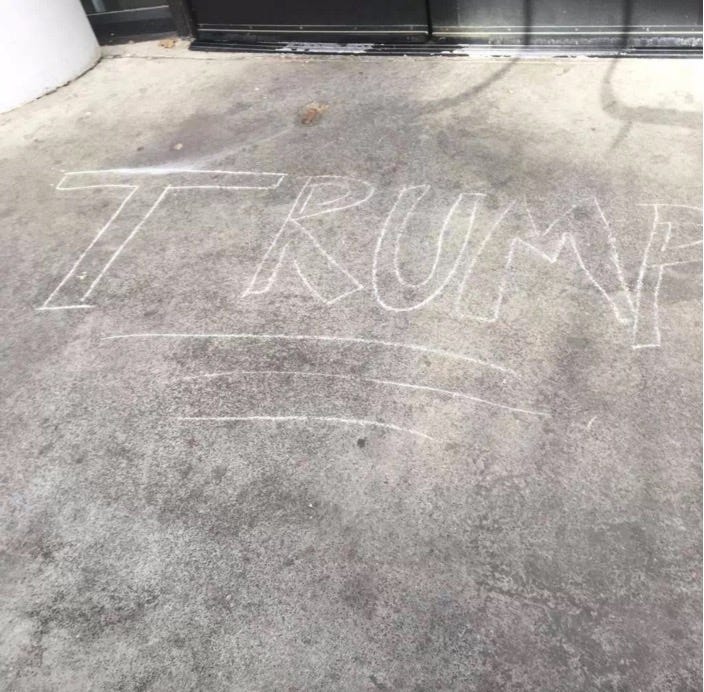 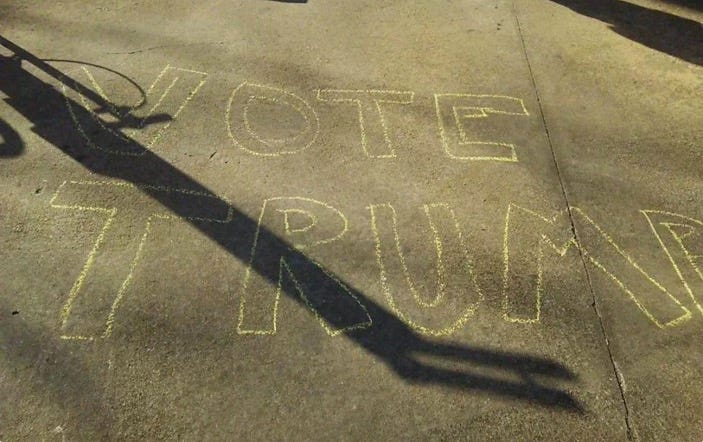 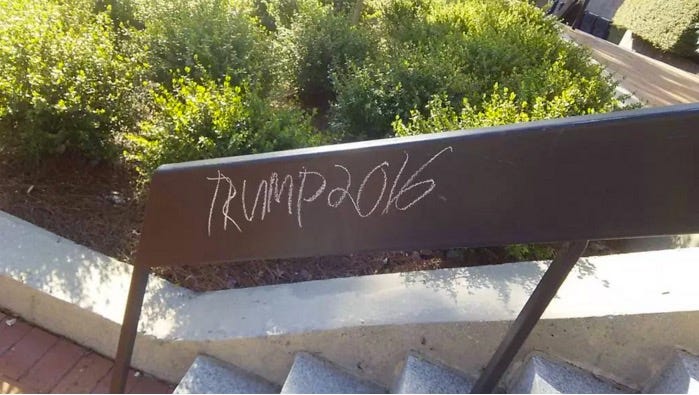 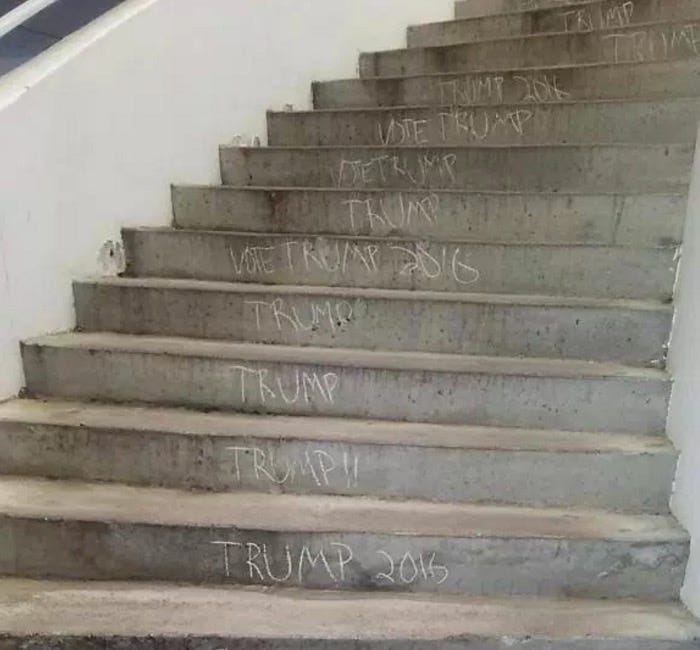 I am a student at Emory and yesterday, March 21st, someone had written Trump in chalk hundreds of times on campus. Some people apparently were OFFENDED that someone wrote Trump 2016 in CHALK so these 50 people were protesting in the DUC…absolutely ridiculous. Today the president sent this email. Really hoped shit like this wouldn’t happen here but this is why nobody respects college students I guess.

THE TAB – Anonymous Emory students defaced the University in support for Trump.

This morning Emory students woke up to an ode to Trump. Some one or some group of people has chalked support for Trump all over campus. The perpetrators have written “Trump” everywhere from the library and DUC entrances to every tile surround Asbury Circle.

While many students see the graffiti as a joke, Some have criticized the vandalism as a display of cowardice.

On many college campuses support for Trump isn’t exactly broadcasted given his offensive nature. This may be a sign of an actual silent majority coming out or it can just as easily be a very thorough prank.

Ooooh this is a tough one. Because as much as I hate Donald Trump’s legitimate candidacy, that’s how much I hate 2016 college protestors. Real shitty situation having to pick a side in this one.

I mean from the article and response this is getting I assumed somebody wrote “TRUMP 2016″ on like a Klan hood attached to a Confederate Flag and hung it outside of an African-American fraternity or the Muslim Student Union or something. People just wrote Trump 2016 on campus in random places with sidewalk chalk? Like the stuff that washes away the next time it drizzles? That’s “defacing campus”? It causes protests in the dining hall and an official letter from the school president announcing steps taken to prevent this from happening again?

Yesterday I received a visit from 40 to 50 student protesters upset by the unexpected chalkings on campus sidewalks and some buildings yesterday morning, in this case referencing Donald Trump. The students shared with me their concern that these messages were meant to intimidate rather than merely to advocate for a particular candidate, having appeared outside of the context of a Georgia election or campus campaign activity. During our conversation, they voiced their genuine concern and pain in the face of this perceived intimidation.

After meeting with our students, I cannot dismiss their expression of feelings and concern as motivated only by political preference or over-sensitivity. Instead, the students with whom I spoke heard a message, not about political process or candidate choice, but instead about values regarding diversity and respect that clash with Emory’s own.

As an academic community, we must value and encourage the expression of ideas, vigorous debate, speech, dissent, and protest. At the same time, our commitment to respect, civility, and inclusion calls us to provide a safe environment that inspires and supports courageous inquiry. It is important that we recognize, listen to, and honor the concerns of these students, as well as faculty and staff who may feel similarly.

On the heels of work begun by students last fall and advanced last month through the Racial Justice Retreat and subsequent working groups, Emory is taking a number of significant steps:

· Immediate refinements to certain policy and procedural deficiencies (for example, our bias incident reporting and response process);
· Regular and structured opportunities for difficult dialogues (like the Transforming Community Project of several years ago);
· A formal process to institutionalize identification, review, and addressing of social justice opportunities and issues; and
· Commitment to an annual retreat to renew our efforts.

To keep moving forward, we must continue to engage in rich and meaningful dialogue around critical issues facing our nation and our society. I learn from every conversation like the one that took place yesterday and know that further conversations are necessary. More than that, such discussions should lead to action that continues to foster a more just and inclusive Emory. 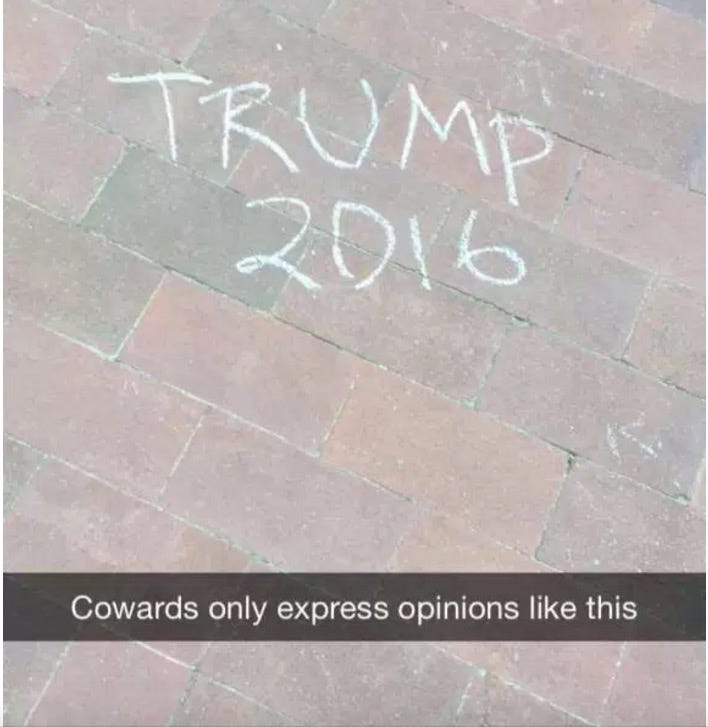 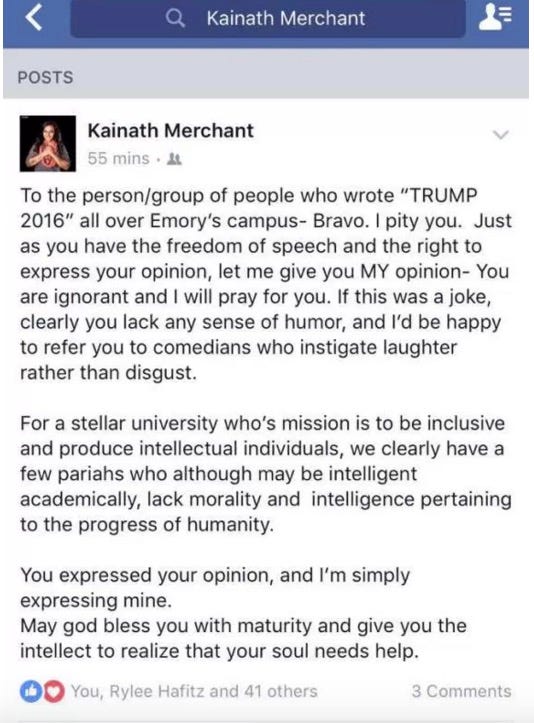 I’m sorry this is America right? You can’t support a political candidate when people “voice their genuine concern and pain in the face of this perceived intimidation” about your choice? You want to open “rich and meaningful dialogue about critical issues,” but endorsing a candidate with certain stances on those issues is “intimidating and against Emory’s own values?”

Wild stuff. Just don’t get it anymore. I’d shoot myself in the face before I A) voted for Trump or B) found myself spending my time at college marching and chanting and making demands about my hurt feelings over sidewalk chalk. Everyone’s lost their damn minds.

[Thanks Noah for the tip]