This is without a doubt one of the highlights of every Patriots season for me, the annual Belichick breakfast where he sits by himself, gets surrounded by reporters, and dreams of stabbing each and every one of them in the throat with the ham knife just just snuck back from the buffet. My favorite moments that you can count on every single year are the AFC Championship game, Brady running onto the field at GIllette for his first home game, and Belichick’s murderous morning.

I mean look at that picture from Howe. That literally may have cost Jeff is life. He deserves a Pulitzer for that thing, like the photographers who were at the tip of the spear during war times. You got some shots of bombs going off or refugee kids fishing their teddy bears out of rubble? Well Jeff Howe sat across the table from Belichick and grabbed the deathiest death stare in history, you tell me which took more bravery.

And that last video? Vintage Dwight Schrute. That was no different than when Jim tried, ever so rudely, to have his shit all over Dwight’s personal space so Dwight had to get the ruler and make room. Don’t play Dwight/Bill like a bitch, he’ll get your shit out of there in the blink of an eye. Dude needs his room to operate and be the best salesman in the company/the best coach to ever live. You say childish, I say a mad genius.

PS – If I had to order these pics from previous season, here’s my top 4 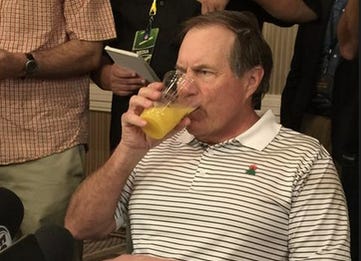 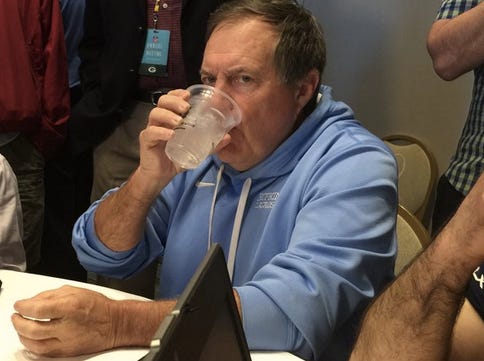 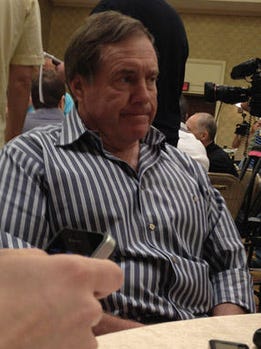 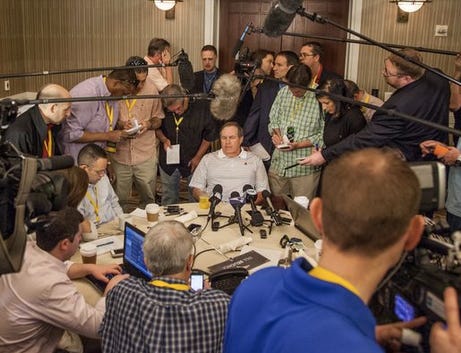