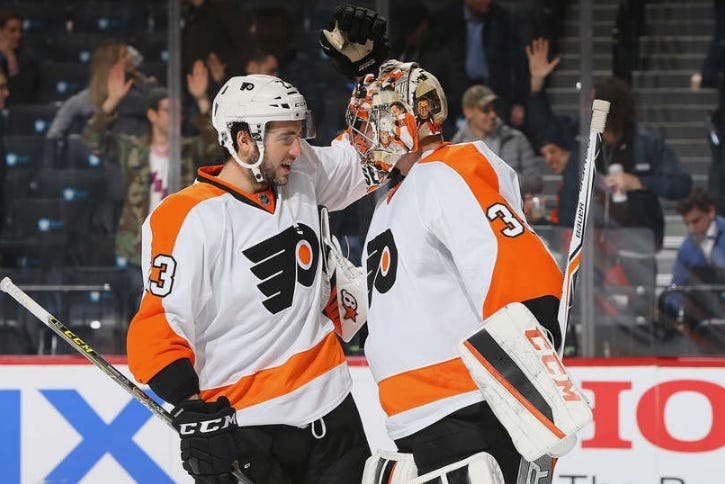 ^Click play and pray to whatever god you do or don’t believe in that the Flyers manage to to play 11 more games like that.

The Flyers let a huge one slip away on Saturday. You know that, I know that, even that bitch Carol from accounting knows that. It’s that time of the Flyers season that everybody who hasn’t been following all season comes to you as their guide to let them know how the team is playing, what scenarios need to go down in order for them to make the playoffs, etc. etc. Good news for you is that even with that shit job performance on Saturday, you have some good news to tell everybody in the office today after the Flyers went into Brooklyn and snatched a quick 2 points away from the rapidly deteriorating Islanders. Now the boys are still back to the same spot that they were in like a week ago, 1 point behind Detroit with a game in hand for that 2nd Wild Card spot, but that’s better than dropping off at all. They are the hottest team in the NHL not currently in the playoff picture but I think we all know this season is going to come down to that last game on April 10. So stay buckled up, stay holding on to your butts, and let’s keep this ride going.

Ladies And Gentlemen, The Brandon Manning Era Has Officially Begun

Listen. I have zero idea what Hakstol continues to put Brandon Manning in the lineup night after night. I feel like he brings nothing to the table besides always trying to start shit after the whistle. But this snipe last night? Well he just bought himself into lineup for the rest of the regular season. Poor poor Thomas Greiss. Nobody deserves to get sniped that hard for somebody’s 1st career goal. Especially when that goal came off the stick of a 25-year-old 7 slot defenseman. I know the Islanders have been dealing with some goalie troubles over the past month and this zing certainly doesn’t help. Speaking of goaltending issues, the Flyers would be going through those right now except for the fact that Stephen F. Mason is a bad bad man.

Michal Neuvirth is done for the rest of the regular season with a LBI. Including last night and tonight, the Flyers still have 4 more back-to-backs to play to close out the year. And with the playoff push in Charlie Angel’s 2: Full Throttle, obviously Mason is going to have to eat the majority of those games. You can maybe get away with giving Stolarz some throw away games like Arizona and Toronto, but Mason is going to have to put on his big boy pants and put the team on his shoulders. Which is exactly what he did last night with 23 stops on 24 shots. His pad speed is just unreal. Second save after second save. To be honest, I wasn’t a huge fan of how many second opportunities the Islanders were getting all night. It burned the Flyers on that Okposo goal and it should have burned them a few more times last night if Mase didn’t pull some ridiculous saves out of his ass. But moral of the story is that Stone Cold Steve Mason is hungry and the big dog’s gotta eat.

I’ve been saying for a few weeks now that the Cousins-Laughton combination is exactly what the Flyers need to keep wearing down teams late in the season. They’re a couple of Energizer bunnies out there that go hard every single shift. Imagine how effective they’d be if you gave them another competent winger to work with? Well enter Jake Voracek, roll the tape from last night and you know exactly what you’re getting. Obviously I’d love to see Jake back up with Claude and Simmonds if playoff hockey started tomorrow for the Flyers. But that Cousins goal from last night are the looks that you’re going to get when Voracek is getting matched against 3rd lines. With Schenn playing out of his mind lately on the top line, Coots and Raffl doing work on the 2nd, Jake with the Energizer Bunnies on the 3rd and the 4th line continuing to eat big minutes, the Flyers are a deep team. They’re a team that you wouldn’t want to play against in the playoffs right now. As our good friends Big Cat and PFT Commenter would say, they’re a team that looks primed to make some noise.

I’m on the road for the next few days so I wasn’t able to get video of Coots’ pass to Gagner for that 3rd goal on the night. But it was quintessential Coots. He probably could have easily scored himself there. But he’s always thinking unselfish hockey and he’s always thinking one step ahead.

– Another really good night for Radko Gudas. I’m more than happy to admit that I was wrong about him a month ago. He was playing like a dickhead at the time so I’ll still stand by everything that I’ve said. But he’s been huge over the past 10-12 games when the Flyers have gone on this push. He’s still playing physical as shit, he’s just not setting himself up to get tossed out of every game he plays in now.

– Good to see Claude pot home that empty netter to seal the night. Coming into last night, he only had 2 goals in his past 10 games. He’s been playing like the Claude Giroux everybody expects him to play like, he just hasn’t been able to find the back of the net much lately is all. The rest of the NHL better start praying that no flood gates were opened last night or else now they’re all in deep deep shit.

– Blue Jackets tonight @ 7 in Columbus. Detroit plays Tampa at 7:30. The Flyers haven’t been getting any outside help from teams lately so I wouldn’t expect Tampa to put Detroit away in regulation. So here’s to hoping the hockey gods are on the Flyers side tonight. Just make sure that you have both happy tissues and sad tissues on hand.