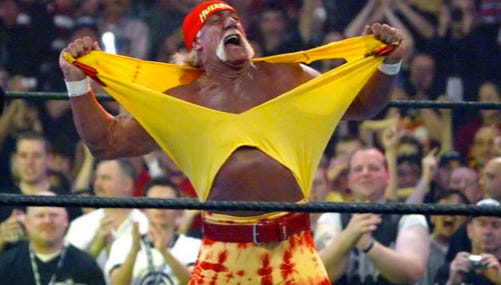 The rich got richer today, as the jury awarded Hulk Hogan another 25 million dollars in punitive damages. What are punitive damages? It’s when you pour salt on the wounds just to prove a point:

However, the judge did tell the jury to take it easy on Gawker. 115 million was a lot, maybe just a few papercuts between the toes followed by a saltwater bath.

Not the best day to be AJ Daulerio, imo.

The Gawker attorney even got down on his hands and knees and begged and pleaded with the jury.

Quite possibly my favorite part, and you’ll know why in a second:

Ok so keep this in mind- the jury grew a heart and wanted to take it easy on poor (pun intended) AJ Daulerio. Reasonable, I guess. Make him clean up some state parks and highways, maybe he’ll learn a lesson along the way. The judge said no.

So what makes that my favorite part?

Oh we can’t give him community service? Ok in that case, 100 THOUSAND DOLLARS. Jesus fucking Christ, that’s a baddddd beat. So if I’m doing my math correctly, he is $27,000 in debt, plus $100,000 owed to Hulk Hogan, giving AJ a net worth of -$127,000. As a fellow blogger just trying to get my page views up, I feel a tiny bit bad for him. I assume he just throws his phone into a volcano the next time Sallie Mae leaves a voicemail.

So now Gawker will appeal everything, and who knows how far this case will go.

PS: Love the judge not knowing how the Internet works. A two week trial that dove deep into the interworkings of the Internet, but yet so much left to learn.