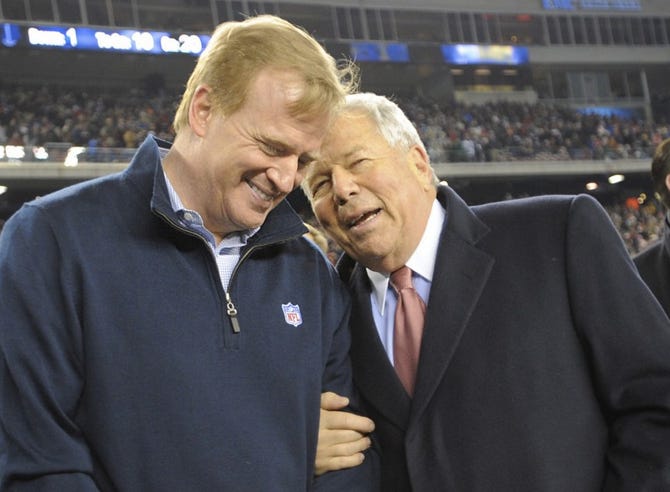 (PFT) – Patriots owner Robert Kraft, in accepting the team’s Deflategate penalties, said he was dropping the matter for the good of the league. But that doesn’t mean he was done with it. Kraft told a group of reporters at the league’s owners meetings that he wrote commissioner Roger Goodell a letter, outlining his belief that the Patriots should get their first-round pick back. “We’ve done everything we can do,” Kraft said, via Karen Guregian of the Boston Herald. Kraft said he wrote the letter more than a month ago, and wouldn’t tip his hand about any response he may or may not have gotten. The league took away this year’s first and a future fourth, and fined the team $1 million.

On the surface this looks like a silly PR move. No chance that Goodell would ever just simply agree to give a draft pick back after a year and a half of court proceedings because Robert Kraft asked nicely, right? Not so fast, my friends. I don’t care who you are, those three times a year that there’s actually a letter for you in your mailbox are awesome. The whole experience is sublime: the ripping open of the envelope, the hour spent trying to decipher what your nana said because she still writes in cursive and you haven’t read that nonsense since third grade, deciding how you’re going to spend that 15 dollar check, it’s all fantastic. So I wouldn’t be so quick to totally dismiss this move. I guess it’s a bit worrisome since Kraft declined to mention if Goodell replied, but you’ve got to consider the fact that the letter was only sent a month ago and the United States Postal Service is just one old, drunk guy so Goodell probably hasn’t even gotten it yet. Once he does I’m positive the league will immediately reinstate the Patriots’ pick. Even the robotic heart of Roger Goodell will understand that a handwritten letter should make him connect to the sender and feel on a human, emotional level.