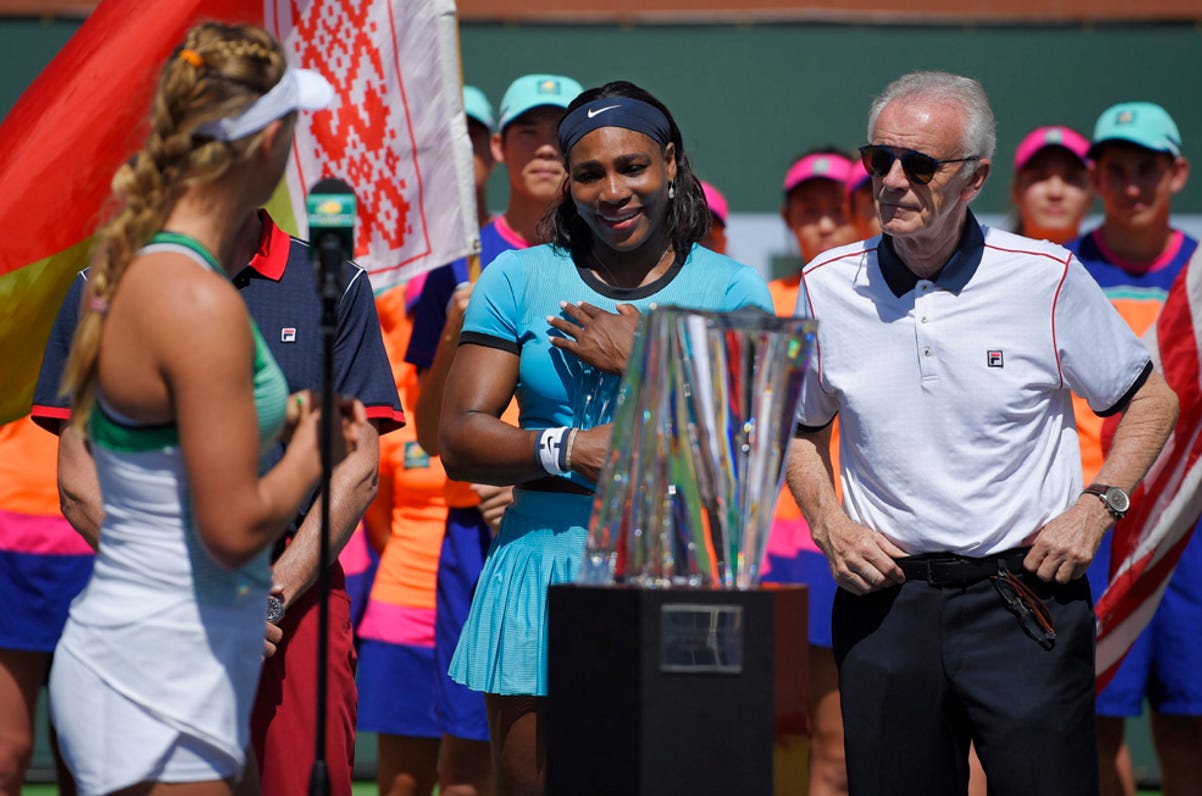 INDIAN WELLS – BNP Paribas Open Tournament Director and CEO Raymond Moore shocked the tennis world Sunday by saying women tennis players should thank the men’s tour for the success of the sport today. He said the Women’s Tennis Association didn’t make any decisions and women are “very, very lucky” to be able to “ride on the coattails of men.” “If I were a lady tennis player, I’d go down every night on my knees and thank God that Roger Federer and Rafa Nadal were born because they have carried this sport. They really have,” Moore told reporters at annual media breakfast. Moore’s comments were surprising considering the sport offers equal prize money and equal billing for men and women superstars. “I don’t think any woman should be down on her knees thanking anybody like that,” said Serena Williams, who has dominated women’s tennis for more than 15 years. “You know, there’s only one way to interpret that. Get on your knees, which is offensive enough, and thank a man. “We as women have come a long way. We shouldn’t have to drop to our knees at any point.” Williams, a 21-time Grand Slam champion, has earned $75.6 million in her career, third highest among all tennis players.

Listen we all know men’s sports are more popular than women’s. Always has been, always will be. Thats nothing new. This dude is not breaking any news saying this.

But if theres one sport where these comments seem stupid, its tennis. This isnt the WNBA we’re talking about here. The men in the NBA literally make the WNBA possible. I think the WNBA has been operating at a loss for like 20 straight years and the NBA just funds it for PR purposes. But tennis is legitimately the one sport where the women are actually a draw themselves. The Williams Sisters have been the biggest story in the sport of tennis the past couple decades. Like yea of course Federer is maybe the GOAT but after him, Serena Williams is the biggest in that sport. Probably even bigger. I’m sure diehard tennis fans will talk about Nadal and Djokovic and all the other mens stars but generally speaking, for the casual fan and in pop culture and the rest of the sports industry, Serena Williams’ name is synonymous with sport of tennis. For the average sports fan who doesnt give a fuck about tennis, those chicks are the most popular thing in the sport. From Sharapova to Wozniacki, and even down to the Kournikova’s of the world who arent good but are still hot, the mere fact that I can rattle off even just a handful of major tennis stars proves that its legit the one sport where the girls are just as important. The fact that I’ll actually care for a split second or take notice if Serena Williams gets upset or if she wins her 100th Grand Slam proves that the girls matter. There’s been a long list of female tennis stars and Serena Williams came along and Tiger Woods’d it and took it to the next level.

Now again, I’m speaking as someone who doesnt know tennis, and I’m not trying to sound like I’m writing a column for ESPN W. But the point is tennis is just about the ONLY sport where the female stars make their own names. Win their own money – major money – and land their own endorsements. You look around the sports landscape and Serena fucking Williams is about the last person who is gonna be getting down on her knees for a dude.