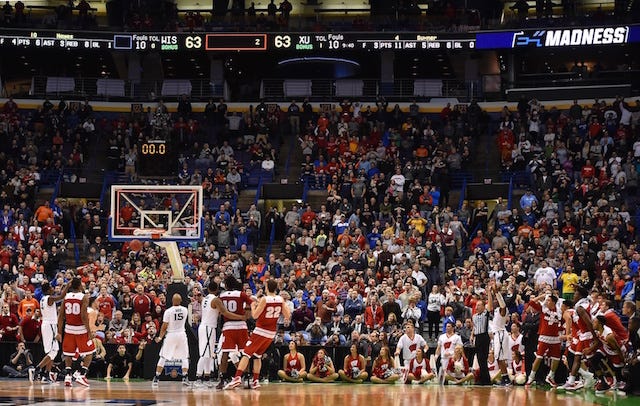 Everyone still alive after this weekend? Alright, so let’s talk about the most entertaining opening weekend in the NCAA Tournament in recent memory. I stand by that last night was one of the greatest Twitter days with the Notre Dame game, UNI collapse, Wisconsin’s game-winner, Oregon blowing the lead before coming back and Katina Powell calling Terrence Williams a fingers in the booty type of guy.

Before we get into previewing the Sweet 16 (which will be done later in the week) we have to take a moment to go over the takeaways from the past 48 hours.

Yes it was an absolutely incredible shot by Bronson Koenig, but I want to discuss Greg Gard for a second. That was a helluva play call by the no longer interim coach at Wisconsin. Setting up in a diamond set at the top of the key with Nigel Hayes at the top and Koenig on the far side immediately set up for confusion on Xavier’s side. It wasn’t exactly the picket fence, but the wheel route that Gard set up worked perfectly as Showalter dipped to the far side, Vitto Brown ran a loop, leaving Myles Davis in the middle of the lane and Nigel Hayes dove low. That of course left Koenig running toward the ball with Remy Abell having to chase him. We’ll see that shot at One Shining Moment. But, Greg Gard did one of the best coaching jobs since he took over considering where Wisconsin was after the first month of the season.

For Xavier everyone wanted to talk about the charge call on Edmond Sumner with the last offensive possession for the Muskies. Yeah, it wasn’t a charge but it shouldn’t have mattered at all. Xavier was up nine with six minutes to go and had Wisconsin in absolute foul trouble. They scored five minutes the rest of the game. That will haunt Xavier more than the charge call. They stopped attacking the rim and settled for jumpers instead. That said Xavier is going to be a top-5/10 team in the preseason next year. They are losing James Farr and Remy Abell, but will still be 10 deep and JP Macura is probably better than Abell in the starting lineup. For the first time since expansion, Villanova won’t be the favorite to win the Big East.

We’ll never see that again. UNI had a 99.9 percent win probability and lost. I repeat a 99.9 percent win probably. This surpassed the Miracle Minute between Duke and Maryland and Illinois coming back against Arizona in the 2005 NCAA Tournament as the ultimate collapse. UNI’s postseason was an absolute roller coaster when you consider they beat Wichita State in overtime in the MVC semifinals and then won the conference tournament on a bounce at the buzzer that went about 15 feet off the backrim. If that wasn’t enough there was a half court buzzer beater to beat Texas before the collapse against Texas A&M.

I get that they are in the Sweet 16 and you have to beat the teams in front of you. But, no one benefited more this year than Syracuse. They really should have been in the First Four in Dayton instead of Wichita State and Michigan and got a favorable draw against Dayton (favored in Vegas). They then took advantage of getting Middle Tennessee State in the Round of 32 and now are a Sweet 16 team. That doesn’t make them a great team all of a sudden as the NCAA Tournament is incredibly fluky, but kudos to Syracuse for beating who was in front of them.

Lost in the great games of the night, Oklahoma’s Buddy Hield dropped a cool 29 in the second half against VCU to secure a win. If that wasn’t enough, 19 of them came in the final eight minutes and that includes two missed free throws the last 30 seconds – Vegas thanks you for that Buddy. He set the high score in the NCAA Tournament this year with 36 in the game, but more importantly it came when Oklahoma was blowing a 14 point lead to VCU. Everyone needs to remember he is appointment television no matter who they are playing.

Going to sound like Bob Ryan from Entourage for a second. What if I told you there was a white dude with a unique haircut and a beard that won the day while losing the best game played of the day? Is that something you might be interested in? Because Thomas Walkup absolutely dominated social media and the game as they were the only game going at the time. Walkup scored 21 points with 5 rebounds and 5 assists and had everyone on social media buzzing. You might even say he made some noise. That game was the best one of the day from start to finish and did it shock anyone that a guy named Rex Pflueger won the game?

I had a lot of people – rightfully so – chirping me on Twitter asking me my thoughts on the Indiana/Kentucky game. First off, Indiana won that game thanks to a guy with one of the coolest names in the country – OG Anunoby, who was able to defend everyone on Kentucky from Jamal Murray to Alex Poythress. Anunoby helped force Jamal Murray into 1-for-9 from the 3-point line and altered a lot of shots. I’ll admit when Kentucky jumped out to the early lead and got two fouls on Thomas Bryant, I thought it was over. Bryant was a mismatch for Kentucky and that showed in the second half when he dominated Kentucky’s froncourt. He finished with 19 points and went 6-for-8 from the free throw line, including a ton of key free throws late in the game. For Kentucky, no one showed up. Yeah, Ulis had 27 points, but he was off most of the game. For the first time all season he was getting beat off the dribble by Yogi, which led to defensive breakdowns and finished with four turnovers, something Kentucky fans aren’t used to seeing. The loss isn’t as heartbreaking for Kentucky fans as 2010 West Virginia or last year, but the game showed these two teams need to play every year. Each coach needs to put this together and have Calipari agree to 2 home and home games while Crean needs to agree to 2 neutral court games. Have a four year agreement with a game at Rupp Arena, Nashville, Indianapolis and Assembly Hall. Indiana fans – congrats, Tom Crean absolutely changed his thought process halfway through the year and not having 3 hour shoot arounds anymore, letting this team actually enjoy playing. The depth showed here and Indiana won the game.