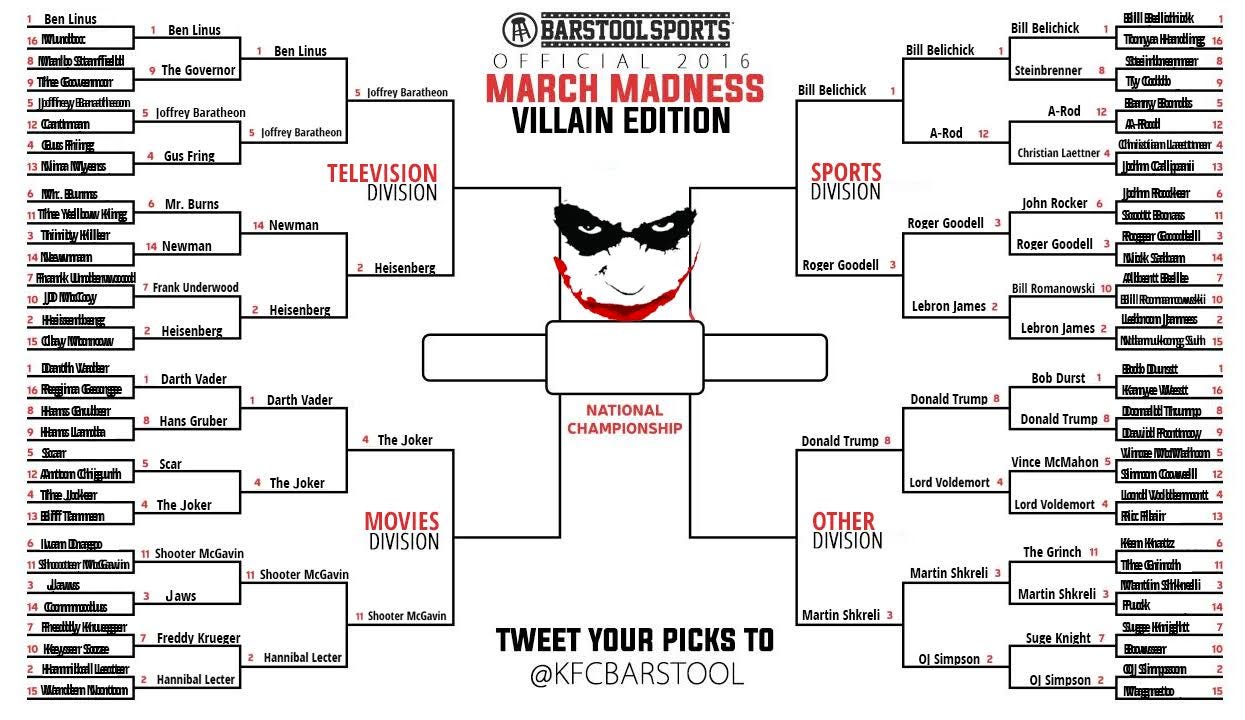 We’ve got 1 seeds losing! We’ve got a Cinderella dancing after midnight! We’ve got an Elite 8 showdown for the ages! LFG!!

Down goes Linus! Down goes Linus! Ben Linus was an interesting 1 seed. If you watched and liked Lost, you understand it. He was as diabolical and manipulative as they come. If you werent a Lost fan, you dont understand the seeding. So running up against a hatable little prick in a wildly popular show that is currently on air is a rough draw for Benny boy. Joffrey and his hooker killing ways dethrones the second one seed. Bob Durst and Ben Linus watching on their couches from home.

The clock stricks midnight for Newman. A valiant run from a 14 seed. A fan favorite, indeed. But no match for the drug and murder kingpin Heisenberg. Newman was a funny villain that made us laugh. Heisenberg poisoned children and watching people drown in their own vomit out of a sense of greed. Newman was No match for Walter White.

Our 3rd number 1 seed goes down! Truth be told if movies werent their own bracket, Joker and Darth could have both been 1 seeds and met in the Finals. Its that high quality of a Villain showdown. I think if this is Jack Nicholson’s Joker, Darth wins. But Heath Ledger took it to a whole new level. If we’re being perfectly honest, The Joker is the odds on favorite to win this whole thing.

Shooter is still dancing!! The social media blitz and the nostalgic memories of Happy Gilmore have been propelling Shooter past some very stiff competition. But taking out Dr. Lecter – one of the scariest, creepiest, most evil creatures ever in print or on screen – is impressive. Doing it in decidedly easy fashion even more so. Shooter has been breezing through this thing, double pistols firing, in his Happy Place making out with Virginia Vennit.

And so does Belichick…thereby setting up an ENORMOUS elite 8 matchup that the Committee was secretly hoping for all along. Bill vs Roger. The Deflategate Duo finally take out their aggressions head to head in a fictional bracket showdown! 2 assholes enter, only 1 leaves! Vote now!

Double murderer vs the biggest douchebag in modern society. The face of evil in 1994 vs the face of greed in 2016. Shkreli advances. He’s got the resume and the intangibles to make a championship run. Thats how much of a shitty person he is.

Now time to vote on your Elite 8 Matchups…who ya got??