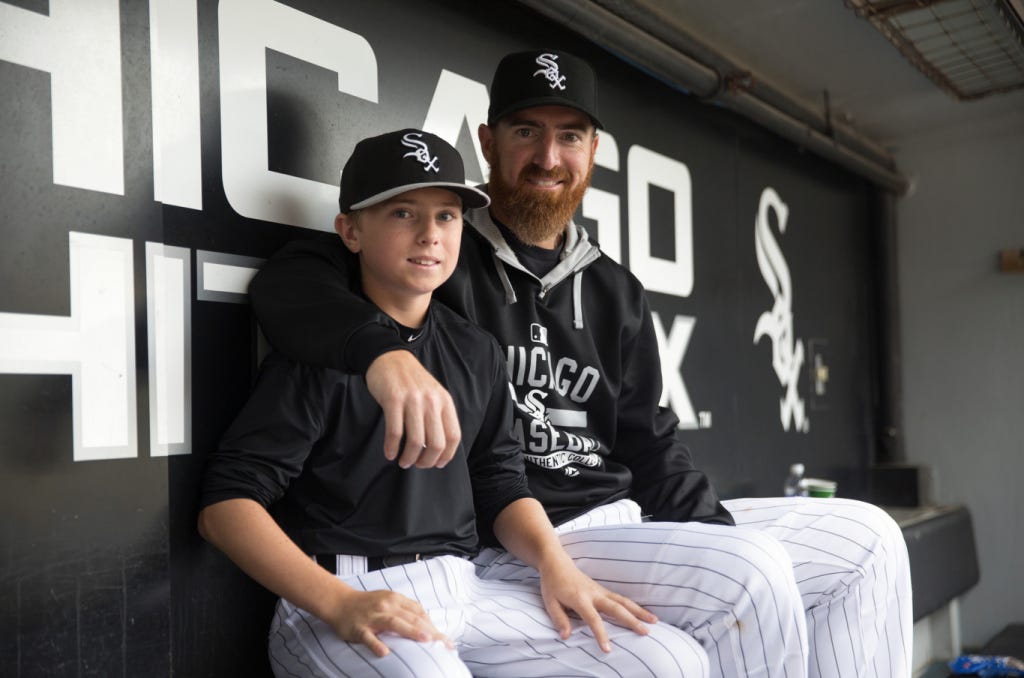 This is one of the more bizarre spring training stories that I can recall. I know WhiteSoxDave already covered the story, but I have a few thoughts on this one.

If you haven’t already heard, White Sox first baseman Adam LaRoche retired due to “personal reasons”, and then we later found out that those personal reasons were because White Sox vice president Kenny Williams asked LaRoche to reduce how often he brought his son into the clubhouse. For the vice president of the team to actually have to ask you to stop bringing your kid around so much, he’s gotta be there quite a bit. Turns out he was there pretty much every single day. That is incredibly excessive and unnecessary. When I heard the story initially, I pictured LaRoche’s kid being like 8 or 9, something like that, because that’s usually how young the kids are that players bring around the clubhouse.

Yeah, he’s friggin’ 14 years old. Like, bro, don’t you have friends you could be hanging out with? Like, I know it must be awesome as shit to have a dad in the MLB, but EVERY day you need to be there? Plus, how is he there every single day if he’s 14? Shouldn’t he be in school? Then we find out that he’s homeschooled, so that explains why he can be in the clubhouse every single day, and also why he has no friends to hang out with.

So when this story first comes out, the White Sox come off as the asshole White Sox who don’t want LaRoche’s kid around. Then you have all these superstar players coming out in support of LaRoche for sticking up for his kid and leaving $13 million on the table so he can be with his son 24/7, which is just very strange to me.

I’ve also heard the argument that if LaRoche hadn’t hit .207 last year with a .634 OPS that it wouldn’t be such a big deal. You look at Barry Bonds in San Francisco and how, not only did he have his kid in the clubhouse, but he was in the dugout, he was out on the field after Bonds would hit a home run, and the whole deal. Yeah, well when you have a once in a lifetime player like Bonds on your roster, you let them do whatever they want to keep them happy. LaRoche ain’t Bonds, so maybe there’s a little truth to the idea that Kenny Williams isn’t telling Bonds in 2002 that he can’t have his kid around as much.

The bottom line is that no, the White Sox are not the bad guys here. And that doesn’t mean that LaRoche is the bad guy, either. There doesn’t need to be a bad guy in this story. But were the White Sox out of line or in the wrong to say hey, this is a workplace and we can’t have your kid in the clubhouse every single day in this adult environment? No. At 14, you’re more aware of your surroundings than if you brought a 9-year-old in there who has no idea what’s going on, and things are happening in the clubhouse that he’s more likely to notice, and who knows where that information is going. I know that if I’m a player, I don’t want him in there every day, knowing all of the team’s business, and having to watch what I say or do in the privacy of the clubhouse. Get ‘em out of here. This isn’t the YMCA, LaRoche.

But in regards to his decision to retire because of this, I think that’s just flat out ridiculous. Sure, he’s 36 and there could’ve been motivation outside of the White Sox decision to force him to retire, but he’s acting like they said he couldn’t come around at all. They just said to scale it back. To retire and leave $13 million guaranteed on the table is just Bananaland to me.