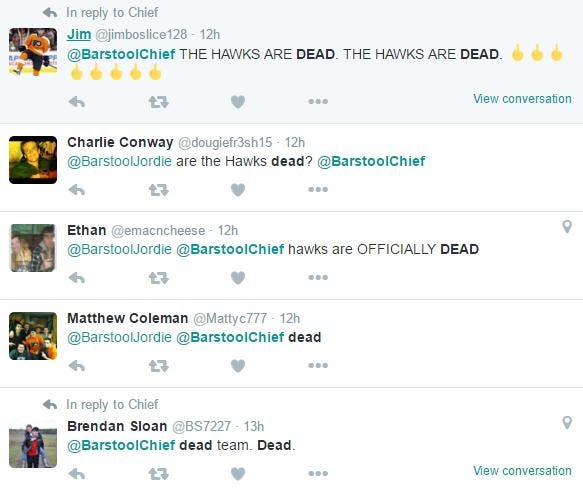 Well I guess that’s it. The people have spoken. There’s something rotten in the State of Chicago. The Blackhawks have lost four straight and 5 out of the past 6. I’ve said this before, but that’s the beauty of twitter. It’s a democracy of opinions in real time. Democracy; full of variety and disorder. It dispenses equality to equals and unequals alike. That’s not a quote from me…that’s Plato. But at the same time it is a quote from me because I wrote the exact same thing in a blog at about this time last year.

Remember last year? The Blackhawks were struggling, everyone was fucking each other’s wives according to prominent Chicago media figures, Patrick Sharp was getting traded to Washington, Kane was hurt, Coach Q was a moron, and after the All-Star break the team really struggled. Then poof, Stanley Cup…again.

A springtime tradition unlike any other. The Blackhawks go through a slump in February/March, fans around the league rejoice in our perceived misery, and far too many Blackhawks fans panic and jump off a cliff. So, I’m writing the annual “Everything is okay” blog.

As usual, reports of the Blackhawks demise have been greatly exaggerated. That comes with the territory of being a Dynasty. Heavy is the head that wears the crown. Last night was a perfect example. Beating the Hawks was the highlight of the Flyers season and probably the best sports moment the entire city of Philly has had in 5+ years. My issue isn’t with Flyers fans, its with Blackhawks fans who are crying about this team. You guys are some fickle assholes.

Here is everything you need to know about the Blackhawks right now:

Rozsival and TVR will NEVER have more minutes on the ice than the Blackhawks big three in the playoffs. Never, ever. When the biggest games are being played Keith will get 29-30 minutes of ice, Hjalmarsson will get his 26-28, and Seabrook will be in that 27 minute range as well. They will not lean on their 4th and 5th defensemen and they certainly won’t play them together for the majority of those minutes. March is the time for experimenting and making sure players are fresh for the postseason. That’s exactly what Coach Q did last night. Different lines, different matchups, ice time for Dmen was upside down.

Yes, the Hawks have some issues.

–Defensive Depth: Yes, the Blackhawks miss Oduya. TVR hasn’t been tested all that much in the playoffs and he will be asked to play much bigger and much more important minutes in this Cup run. I like TVR more than most people on the internet, and I think he will be a steady partner for Duncan Keith in the playoffs. Then you pair Seabrook with Hjalmarsson, and your bottom pair is Rozsival with Keith, Roszival with Seabrook, Rozsival with Keith again, and Rozsival with Hjalmarsson. Ehrhoff, Gustafsson, Svedverg, and who knows…maybe Ville Pokka, will get games as the 6th defenseman. The Blackhawks will be able to cobble together enough minutes and will ultimately be fine.

–Penalty Kill: It stinks. 26th in the NHL. It’s tough to win when you’re consistently giving up goals on the PK. I’m not too concerned about this for several reasons…1) Marcus Kruger is coming back in like a week. When your top PK specialist is out for basically the entire year, your PK will struggle. 2) We’ve seen the Blackhawks correct special teams issues in the playoffs before. It’s not like this group forgot how to kill penalties. 3) The Blackhawks are one of the least penalized teams in the NHL and refs call far fewer penalties in the playoffs. I would be surprised if the PK is what ultimately sinks the Blackhawks.

Panarin Hitting A Wall: Bread Man hasn’t been quite himself lately. He’s obviously crazy skilled and always has a few “wow” moments per game. He has had a few brutal d-zone turnovers lately. Happened again last night. Coach Q split up he and Kane and Panarin didn’t really create much 5 on 5. And you know what…even that’s not a bad thing. If Panarin slides down the point leaders(out of the top 10) then he doesn’t hit his performance bonuses and maybe the Hawks get to keep Shaw somehow. Once the playoffs roll around, Panarin, like the rest of the team, will click back in mentally. Panarin and Kane will likely be reunited and start lighting up goalies again.

When you only watch one team night in and night out, their weaknesses become more obvious. Here is what people forget…every team has weaknesses. Yes, LA and Anaheim are both very good and a Western Conference Finals vs either of them will be a huge challenge, but those teams have major flaws too. The Kings currently have Versteeg on their top line and Rob Scuderi on their top pair. Two guys who knew their way around the Press box when they played here in Chicago. Anaheim is playing great since their early slump, but they aren’t exactly a juggernaut either with Jamie McGinn and David Perron getting top 6 minutes. The Ducks still don’t have that Norris trophy type defenseman either. Every team has weaknesses, I just think the Hawks have fewer. I wouldn’t trade the Blackhawks roster for any other team in the league, and neither would anyone else.

Repeating as Stanley Cup Champion is arguably the hardest thing to do in professional sports. Nobody has won back-to-back since the Red Wings in the late 90s. Maybe the Hawks will run out of gas. Maybe the simply aren’t as good as they were last year. I just don’t see it. The Hawks, on paper, are still the best team in the league and we’ve seen them flip that switch too often to doubt them now. The Blackhawks are still run by the Holy Trinity of Toews, Coach Q, and Stan Bowman, Kane and Crawford have never been better, and this team seemingly has everything it needs to win the Cup again. Dynasty reign, bitches.