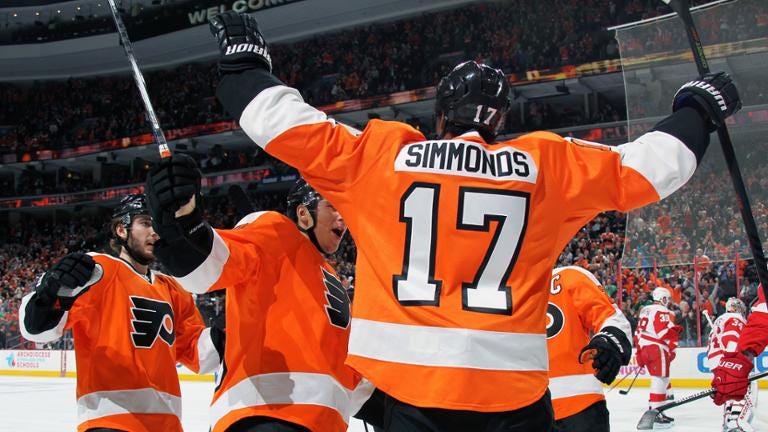 The Flyers went into last night desperately needing a regulation win against Detroit to give them the best shot of making the playoffs this season. There were major playoff implications on the line, the Wells Fargo Center was fucking ROCKING like a playoff atmosphere because the city of Philadelphia is inhabited by a bunch of starved sports fans who need anybody to be good at this point. And how did the Flyers respond right off the bat? By coming out and beating the fucking balls off of Detroit. They out-shot the Wings 23-3 in the opening frame. TWENTY-THREE to three. They completely dismantled the likes of Pavel Datsyuk, Henrik Zetterberg and Dylan Larkin. It was like they have some big trip planned for after the season and actually want the Flyers to take that last Wild Card spot from them. Or maybe they just didn’t want to get bullied by Michael Raffl anymore and went into retreat mode.

I mean, that’s just a big boy goal. That’s taking out your dick and nuts when the season is on the line, putting the team on your back and going to work. Kye Quincey is going to have to take a good long look at himself in the mirror today and decide if this profession is really for him. Raffl ended up with 2 goals on the night and if I’m Ron Hextall watching that game, I’m rubbing my hands together saying “excellent” like I’m Mr. Burns. Because he picked the perfect time to extend Raffl to a 3-yea extension. After the game Reek had last night, I’d be throwing Kopitar money his way. Luckily Hextall got him on the cheap at only $2.35. Raffl has been looking strong playing with Couturier lately and I’d like to see him stay there once Voracek comes back into the lineup hopefully Saturday. I know that Gagner has been playing extremely well lately but I think that makes him the odd man out. Shift Schenn to play RW with Coots and Raffl, keep all the other lines the same.

If I’m any team in the NHL right now, I’m praying that I never find myself in a 7-game series with the Philadelphia Flyers. Because regardless if you win or lose that series, your team is going to be dead. They’re going to be dunzo. You can draw a line of chalk around them and call the coroner. Because it’s guys like Wayne Simmonds and Brayden Schenn that make this team so difficult to play against. They were able to get in Detroit’s head from their first shift up until the last play of the game last night. Schenn was throwing his body around like a goddamned lunatic out there.

Simmonds was doing his thing all night and was able to draw a few penalties. And then what makes them even more frustrating to play against is that they get themselves on the board. Simmonds leads the team with 25 goals, Baby Schenn has netted 23 of his own. 48 and 47 points respectively. They are dicks to play against because they’ll beat you down physically, they’ll beat you down emotionally, and then they score right in your face about it.

And speaking of the physical side of the game, the Flyers completely dominated Detroit in that aspect all night last night. Guys like Ryan White were finishing every check they had the opportunity to make. You see guys on Detroit shying away from Radko Gudas, who I thought had one of his best games of the season despite losing a battle in the corner that resulted in a goal against. Gudas was disruptive as hell last night. He was disruptive with his body and he was also disruptive positionally while making a few really strong defensive break ups. Everybody was on last night, including Mr. Stone Cold Steven Mason.

After that 1st period, the game started to even out a bit. The Flyers are always a steaming hot pile of garbage in 2nd periods. And then Detroit had the Flyers back on their heels a bit in the 3rd but that’s where Mason had his money to make. 34 saves on 37 shots and the majority of those stops were completely bundled up. Mase hardly gave up any rebounds and came up huge on some shots like you see above. Not an easy task to accomplish when you have a set of cannons staring you right in the face like he had to deal with last night. Quick titty commercial break… 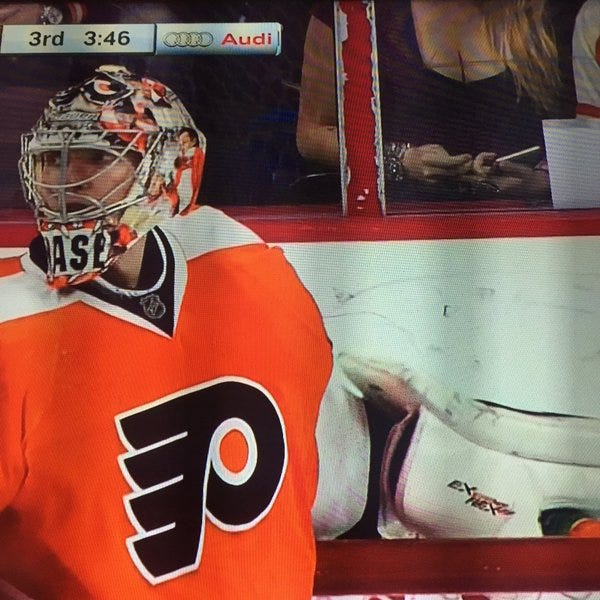 Now back to some hockey.

Shayne Gostisbehere For President Of The World

Like I said, not your typical Ghost goal off a clap bomb from the point. But this is what happens when you’re that confident and that talented with the puck on your stick in the offensive zone. Sometimes you luck out here and there. You know in the movie Wanted when the assassins are able to speed up their heart rate so much that the rest of the world looks like slow motion to them? (at least that’s what I think happens, it’s been a year or two since I’ve last watched that movie). Well yeah, that’s gotta be how Shayne Gostisbehere sees the offensive zone. Picks up the puck at the top of the circle, skates it right into a high traffic area, doesn’t panic at all and the puck is in the back of the net. Ghost Bear Fever is taking the city by storm.

So now the Flyers have Chicago tonight and Pittsburgh on Saturday afternoon. If they can manage to get 3 points out of these next two games, then you can just go ahead and cuncel Detroit. Especially because the Flyers are hoping that Voracek hops back in the lineup on Saturday and then it’s game over. Kind of scary to think about what this team has been able to accomplish without him and without Michael Del Zotto int he lineup, who was easily the best defenseman on this team along with Ghost when he was still healthy. Just shows the resiliency of this 2015-16 Philadelphia Flyers team and that, my friends, is giving me a reason to live in this horrid sports town.