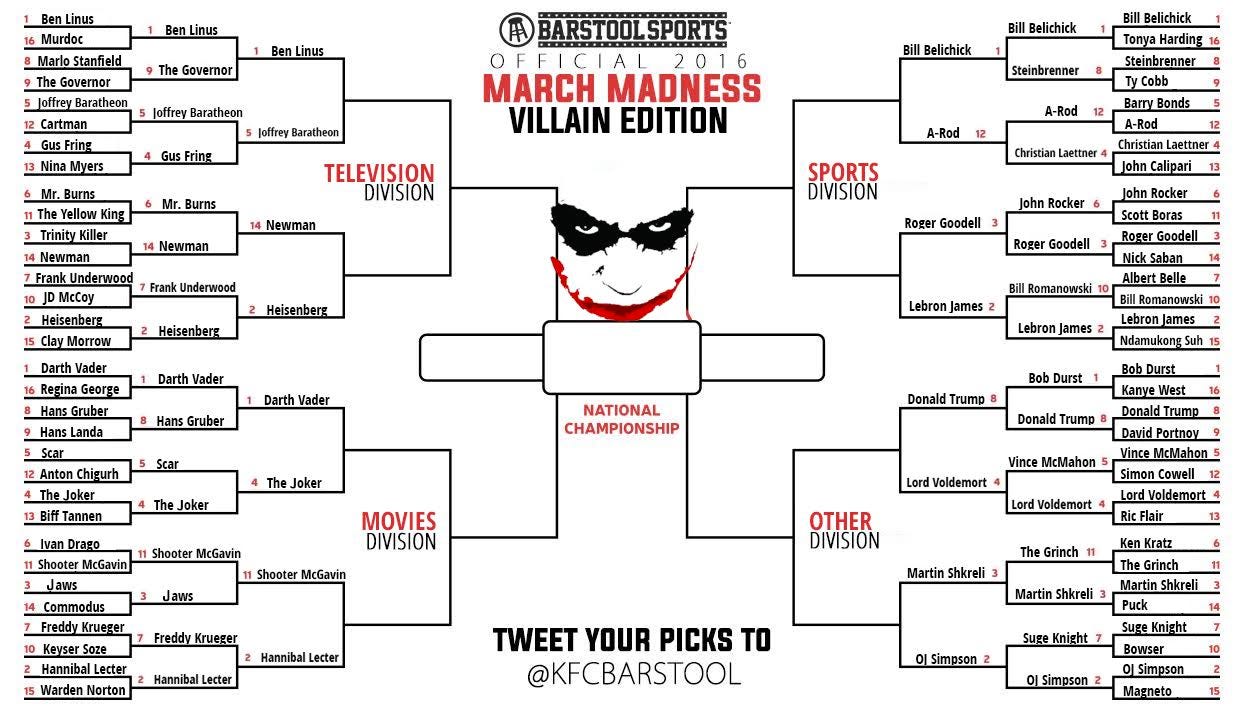 Villain bracket. Second round. March is starting to become mad. High seeds are falling. Chaos all over the bracket. Fire and brimstone from the sky. Cats and Dogs joining in union. Let’s just get right into the carnage. Voting for Sweet 16 at the bottom of the page:

Here are the upsets.

This is technically an upset given the seeding, but that might be a bad job done by the committee knowing the Barstool audience’s love to Seinfeld. Facing Heisenberg in the next round is by far the stiffest competition he’s faced yet. I think the clock is about to strike midnight on this Cinderella run.

Newman isn’t the only 11 seed making noise, although I think Shooter is a more viable threat to make a deep run. There’s a very “John Scott For The All-Star Game”-esque social media campaign going on right now for Shooter, and he is still the most magnificent asshole in the history of comedic cinema.

Bob Durst murdered multiple actual human beings, and the Barstool Sports audience still thinks Donald Trump is a worse villain. Tens of thousands of American citizens voted last night saying Donald Trump deserves to hold the most powerful office in the world. I want everyone to take a five minute break from reading this blog and just stare at a blank wall for a while, pondering this.

ALEX RODRIGUEZ, FROM THE PARKING LOT!!!! A SHOCKER! I’M STUNNED! EVERYONE, SAY HELLO TO THE MOTHERFUCKING BAD GUY!!! 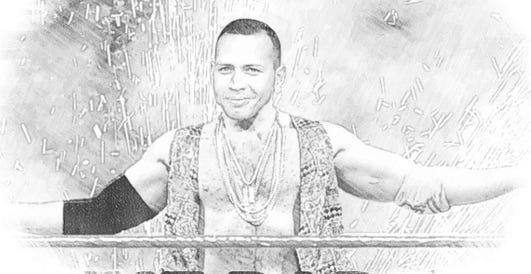 Honestly this result stuns me. ARod has actually done a pretty decent job of rehabbing his public image the past two years. I know a lot of people who used to hate him who now actually enjoy his hopeless social awkwardness and inability at all to be a normal person. Besides, his battles with Bud Selig over the witch hunt to make an example of him put him against the one entity that baseball fans hate more than the New York Yankees: Major League Baseball front office executives. I thought Laettner was a lock for the Elite Eight at a minimum, but I guess that’s why they play the games. Christian does something he never did in his playing career and leaves the March tournament early.
Some other results worth noting…

Two tough opponents, two dominating wins for Roger Goodell. The NFL distancing itself from the recent comments admitting there is a link between CTE and playing football AND the possibility of a Brady suspension ruling is excellent timing for the commissioner is he wants to come out of his region.

I’m glad Stoolies are giving Darth Vader the respect he deserves as the face of movie villianry. He has by far the most momentum of anyone in the tournament.

Between Cartman and Gus Fring, Joffrey has had probably the toughest first two rounds of anyone, but he’s still on his feet. Hints of Kemba Walker’s UConn Huskies that emerged bloodied and bruised from a punishing Big East tournament, then used their battle wounds as fuel for a championship run?