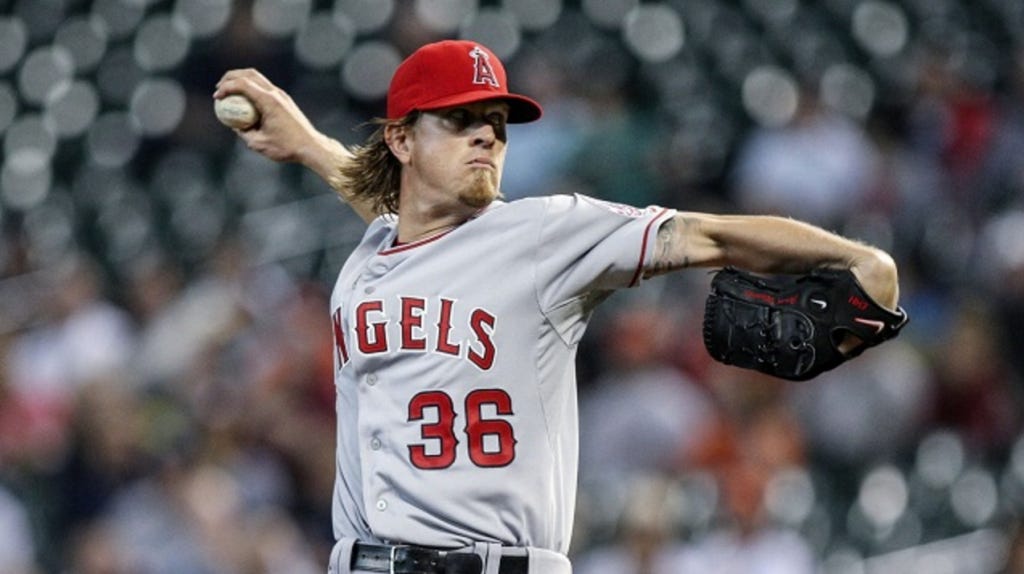 Angels right-hander Jered Weaver has been a topic of conversation this spring, and not for good reason.

As baseball fans, we’re constantly trying to convince ourselves that spring training stats don’t matter. I know I’ve had my troubles with it, as Travis Shaw continues to set the world on fire, and I have to try my hardest not to care so much, and have been failing miserably. But not all spring training evaluations should be ignored. For one, defense should not be ignored. Balls are not being hit any differently at fielders than they would be during the regular season, so that’s something to keep an eye on. The other major aspect to keep an eye on during spring training is fastball velocity.

Now, it’s not unusual at all when guys come into spring training, who normally light up the radar gun, and don’t have the same velocity during spring that you’re accustomed to seeing during the regular season. It’s usually not a major concern, but with Weaver, it absolutely is. Last week, Weaver made headlines when his average fastball velocity during his start against the Dodgers was 79 MPH — a start in which he got taken deep three times, and they were all bombs.

After the concerning outing, Weaver visited Dr. Robert Watkins in California this past Monday with neck tightness, and was diagnosed with mild degenerative changes in the cervical spine. At the time, it seemed like, finally, there was something to place the blame on in regards to his fastball velocity, which had previously been inexplicably trending downwards since 2011, but that wouldn’t be the case.

As you can imagine, for a pitcher who had a fastball velocity in the 90’s over the first five years of his career that now is throwing in the high 70’s, Weaver is understandably frustrated. After the diagnosis, many wondered whether the 33-year-old, who is in the final year of his contract, would start the year on the disabled list. Weaver answered that question convincingly.

“I’ll be ready to take the ball in the fucking opening series,” Weaver said. “It’s just a mild case,” Weaver said Tuesday. “We thought maybe it had something to do with what’s going on, but Dr. Watkins didn’t think it translated (to pitching) or anything like that. Obviously, he’s an expert on the situation. Just keep grinding.”

Weaver went on to say, “I almost wish they would tell me I need surgery,” which kind of makes you feel bad for the guy. It’s frustrating enough to lose that much velocity off your fastball, especially in a contract year, and it’s even more frustrating when you can’t pinpoint what’s actually causing this to happen. Regardless, Weaver will be in that Angels rotation come Opening Day, likely second behind Garrett Richards now that CJ Wilson will be out indefinitely with a shoulder injury. In addition to losing Wilson, 24-year-old Tyler Skaggs is still recovering from Tommy John surgery. Both pitchers will start the year on the disabled list.