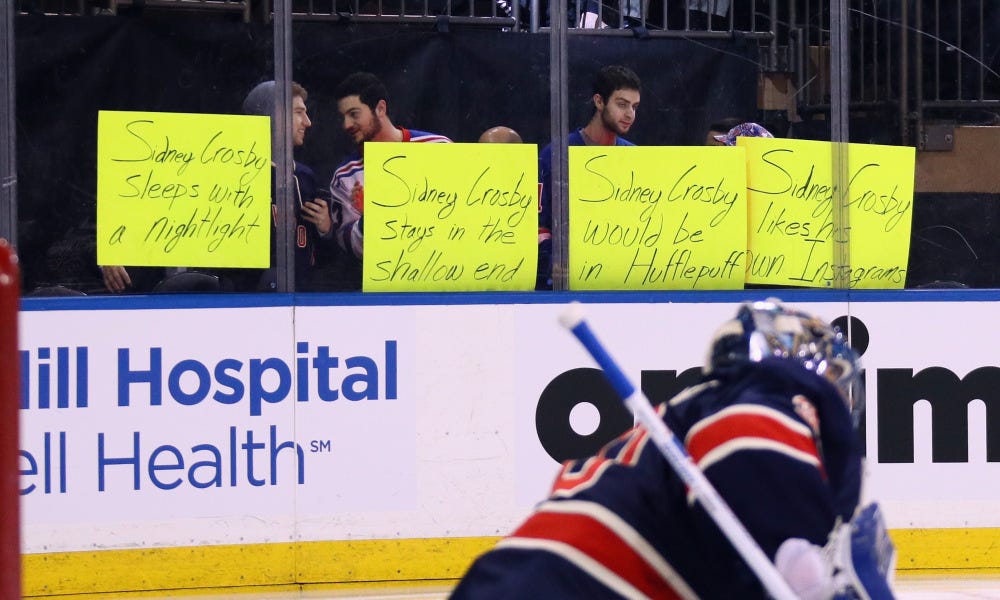 Sure, we’ve seen this type of polite shit talking before with fans heckling Hunter Pence a couple of years ago. But despite it’s lack of originality, I can totally get on board with this movement. Because if there’s one thing that can bring Flyers fans and Rangers fans together, it is our mutual hatred of Sidney Crosby. The enemy of my enemy is my friend, so we’re in this thing together. So here are a few more deep cuts to add to the Sidney Crosby burn book.

Sidney Crosby wipes his ass from crack-to-sack so he’s literally pushing shit onto the back of his ballsack.

Sidney Crosby doesn’t even buy extra Chic-Fil-A on Saturdays so that he’ll have some leftover for when Chic-Fil-A is closed on Sunday and he really wants a spicy chicken sandwich and an 8-pack of nugs.

Sidney Crosby doesn’t listen to podcasts and everybody knows that podcasts are the future of the internet and that Barstool invented podcasts.

Sidney Crosby thinks that the book was better.

Sidney Crosby doesn’t immediately close out of the browser with an overbearing sense of shame and guilt once he’s done jerking O.

Here are a few more good ones courtesy of twitter [dot] com.