The ongoing saga between ESPN and “Pardon My Take” continues. We havent heard anything back from ESPN probably because they’re too busy crying into their mickey mouse diapers and Skip Bayless lobster bibs over that barrel-fire legal brief I shot off at them last week. PMT continues to make ESPN look like the Billy Ripken of the podcast game, and I’ve heard that theyve instructed there talent not to appear on our show due to the ongoing litigation. In other words, Pardon My Take is winning the optics battle and the hearts and minds of the internet, while ESPN is ignoring military history by doing the opposite of a troop surge. If I was John Skipper I would send all assets to constantly be appearing on Pardon My Take to try a counterattack, while possbly driving up there dismal podcast ratings, no offense.

Please remit to me at your earliest possble convenience.

(H/T to reader Yams for the letter)

Not the best reason to be on the front page of the paper this morning. #rugbyleague is definitely not a sport I recommend. 11 stitches later for the little fella but she’ll be right

The Australian Rugby League player got tackled by his dick in a game last week, and continued to to play a entire half with a torn penis. Competing in a rugby game for 30 minutes with your dong hanging on by your urethra is the most inpressive athletic since Doc Ellis’ LSD no-hitter, and it frankly makes Willis Reed look like he played a game with a loose tooth in comparson. At halftime Peacock had to go to the doctor where he claims to have receved 11 stitches (huge humblebrag on his part), and then came back to play in the very next game WITHOUT wearing a cup. I like to imagine there was the french verson of Adam Schefter peddling his little bicycle into whatever hopsital Peacock went to, trying his damndest to get his hands on a copy of a X-ray or MRI to leak to the media like he did with JPP. The real queston this brings up is- would you rather have no hands, or no genitals? They make prostheic hands, but the only prothestic genitals they make are only designed to give someone else pleasure, not yourself so it could never really work as a medical device. Gotta go with no hands IMO. Its worked out pretty well for Ted Ginn.

PS- such a heady move to refer to your wiener as both a “fella” and a “she” in the span of three words. Affirms its masculinty but also, if your dick is female then your technically in a perpetual state of getting laid.

1. The Patriots might of just locked up the AFC East for the next 10 years. New England just signed superstar WR and exellent human being off-the-field Chris Hogan to a 3-year offer sheet that the Buffalo Bills have refused to match. This gives the Pats a triple-threat lunch-bunch of hustle at WR that we havent seen since that 1903 Harvard team that shocked Pop Warners heaviy favored tricky Carlisle squad.

Not to turn this into a racial thing, but it appears that New England could end up with a offense that is 80-90% caucasian which is the highest percent since ironically, the 1960s Redskins. This Cream Team was already loaded with talent and by adding in Hogan, the Pats are going to lead the league in deceptive speed as well as deceptive business practices. And say what you will abou there willingness to exploit loopholes in the rules, but the sheer amount of money that can be saved on not having to buy seperately colored pennies for practice if your offense is 85% caucasian and your defense is 90% african-american really opens up Ernie Adams’ mischief budget so he can focus on all sorts of other hijinx to incorporate this year. Clever way to save money in a salary cap era/

Only downside to bringing Hogan in might be that their offense runs a real risk of running too much of a Princeton baseketball style offense trying to make sure that everyone gets a touch before you can score. Could end up being a little bit too unselfish.

3. 60 minutes had a insane profile of some swedish guy that designs buildings and one of the things they focused on was his proposal for the Washington Redskins new stadium which hopefully this time dosen’t include a indian burial ground directly underneath the 50-yd line and owners box. Depsite the fact that Washington doesn’t know where their stadium is going to be located, they are already deep enough into the planning process to know that it will have to be somewhere in the DC area that has a moat that can be easily converted into a wave pool: 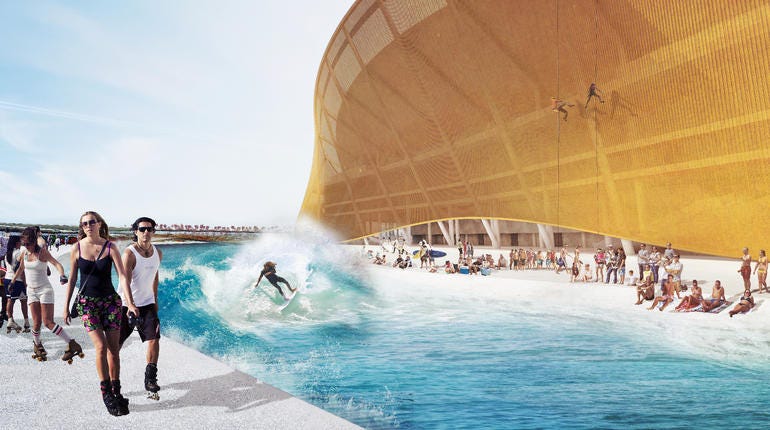 Ive been to about 20 Redskins tailgates and the closest I’ve ever seen to someone surfing is when they lay down a cardbord box so people can walk over a pile of puke to get to the port-a-potty. Plus having a 5 foot deep stream of water around your stadium is going to be a obvious drowning hazard for Dan Snyder- could run into some legal issues.

4. Watched a little hoops this weekend and its frankly disgusting to see the way the games being played nowdays. What ever happened to calling players for a carry? Seems like 90% of the game is spent with players dribbling the ball between there legs to show off for the cute girl in their dorm these days. Good game of basketball should resemble a ultimate frisbee game with letting the ball do all the work. Dribbling too much is just a way of telegraphing that your not good enough at passing.

5. Huge shout-out to all the people who came out to my book signing at SXSW yetserday. Absolutely electric atmosphere. It was basically like a Trump rally out there. Just glad no one got hurt in all the mayhem. 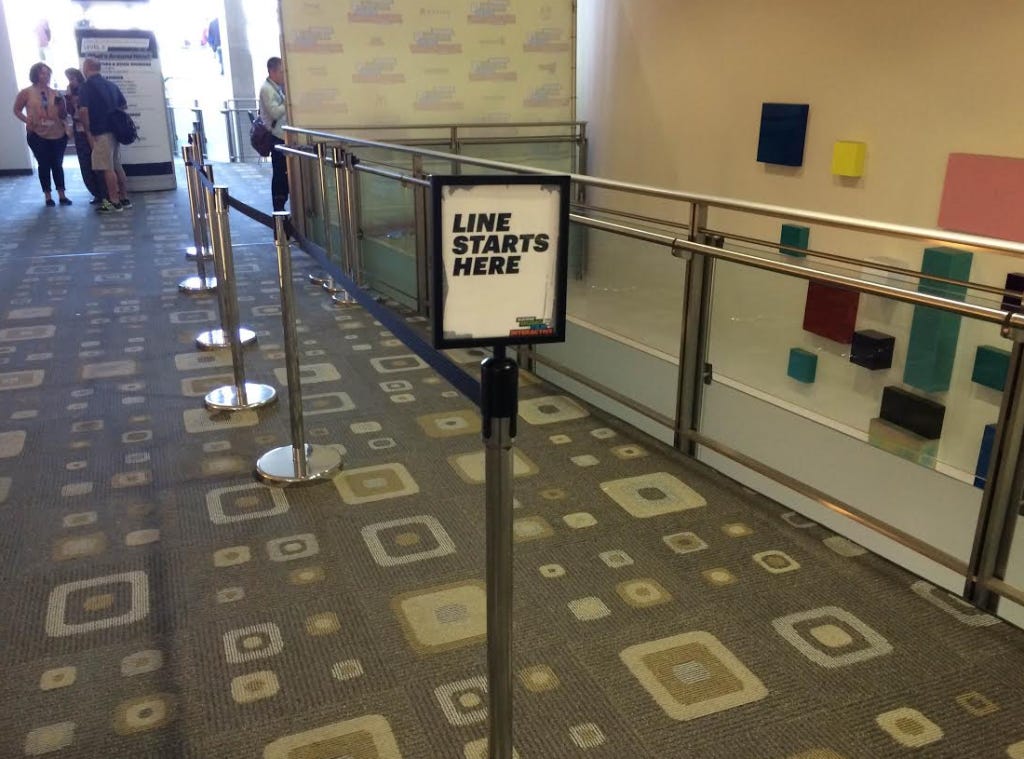 6. Still think the most overated seed from Oregon comes in a sack of schwag.

7. Leveon Bell is making some noise with his Snapchat account this morning. If you havent seen it yet, Le’Veons on a airplane and gets very  uncomfortable that a middle-eastern looking man boarded his airplane. If I’m Leveon Bell I’d be more worried about my own roster position than terrorism. Since Bell’s coming off a brutal knee injury, Id be more concerned with Robert Turbin and less concerned with a man in a turban.

It takes a special degree of predjudice for a guy who literally shares a bathroom with Ben Roethlisberger every day to get nervous about flying with someone wearing a turban. Good to see Bell taking the “If you see something, say something online using a app that is specifically designed to make the warning disappear in 5 seconds” method of homeland securty which is still a upgrade over the Crawford ranch daily briefing methods.

8. Mike Munchak had his fine for pulling Reggie Nelsons hair in the divisional playoff game completely rescinded which makes since. Hair is technically part of a players uniform so grabbing his dreads is no worse than horse collering him. Not allowing a coach to defense himself against a terrible player who’s tresspassing next to the bench would violate the Cassel doctrine and set a dangerous legal precedence

9. Jason Whitlock gets it:

Pardon my Take: But @barstoolsports is interesting when you consider the rapid decline into irrelevance of Deadspin.

1. Eric Weddle- going to fit in in Baltmore like one of those dock workers in the wire who drinks eggs in there beer for breakfast

The dual threat passer/runner spent Saturday night taking off his QB hat and putting on his Arby one: 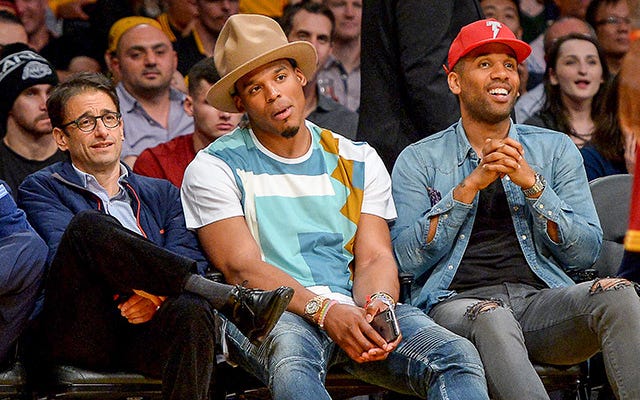 Looks like Newtons filed his Superbowl loss to The Sherrif under the “If you cant beat ‘em, join ‘em” catagory with this style. But when  you get down to it, the hat is probably the least bad fashion choice hes making in this picture. Hes wearing two watches which just tells you how much extra time hes got on his hands in the offseason. Plus he has about a dozen charity bracelets following Travis Barkers lead of having 11 different bands that you pretend to care about at the same time.And folks youd think that someone who hit the genetic jackpot would have a better set of jeans then those.

Hes in LA filming a Nickelodeon TV show which should come as no suprise since Newtons name literally translates to “Gravitates toward Cameras” and he decided to wear this to a Lakers/Cavs game. I’m more concerned with the company he’s keeping by hanging with Lebron and Kobe since between the three of them they’ve lost a combined 7 championships. Say what you want about Trent Dilfer but at least he dosen’t have the stink of failure on him and is too busy hanging out with Robert Horry then to be caught dead with perrenial losers like Lebron.

You know, I went to a panel at SXSW yetserday called “The South Won” and it was a very misleading title. The panel consisted of Bomani Jones, Bun B, Elena Bergeron, Rembert Brown, and Spencer Hall and they did not one single time talk about the Civil War or states rights. But they did talk about how “country” Cam Newton is- and after seeing him in this Dudley Doo-rag type of Mountie hat,the only country I can think of is Canada folks. No offense.

Nonetheless I’m glad to see Newton giving back to the children in a non-Mark Sanchez kind of way, and I figure the more time he spends around other people children, the more he’ll learn that he shouldn’t have any more of his own to pass down his sense of cocky showmanship to.

This weeks rating is: Less than our troops 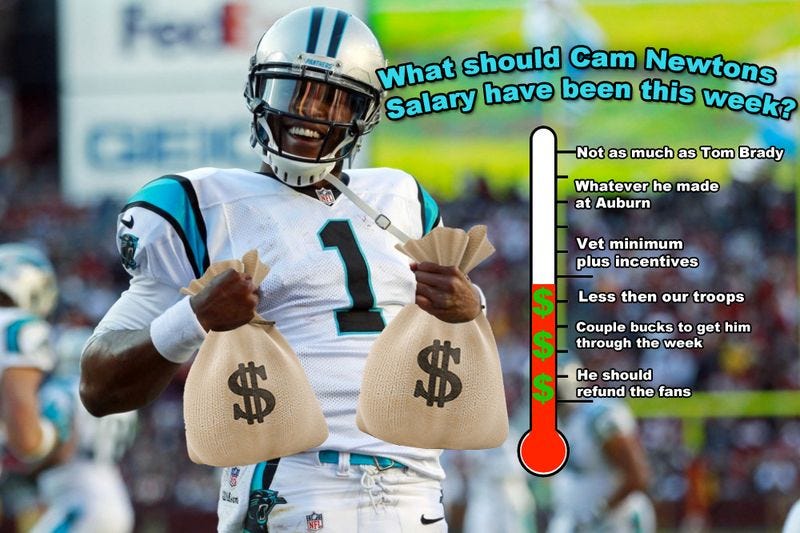 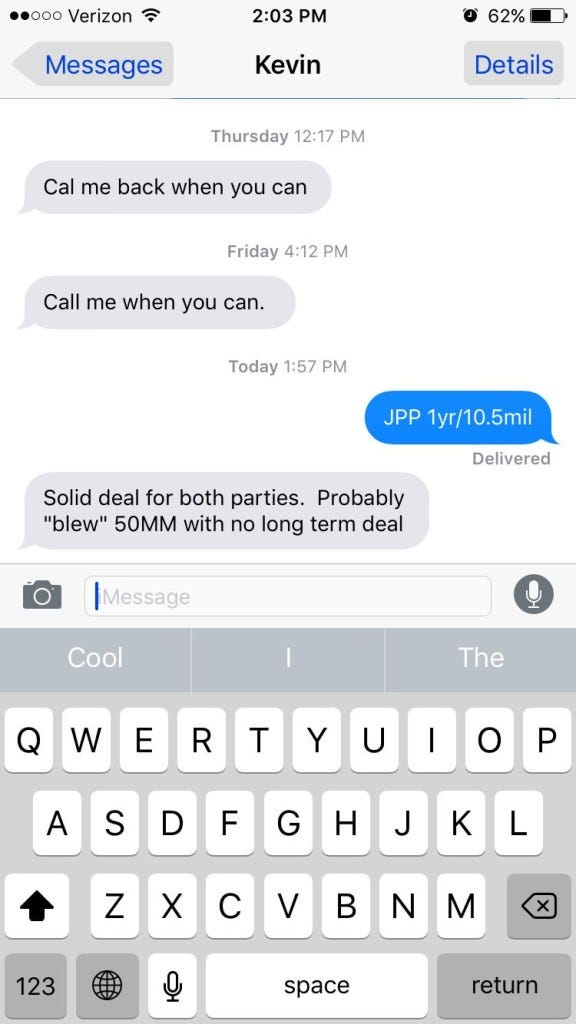