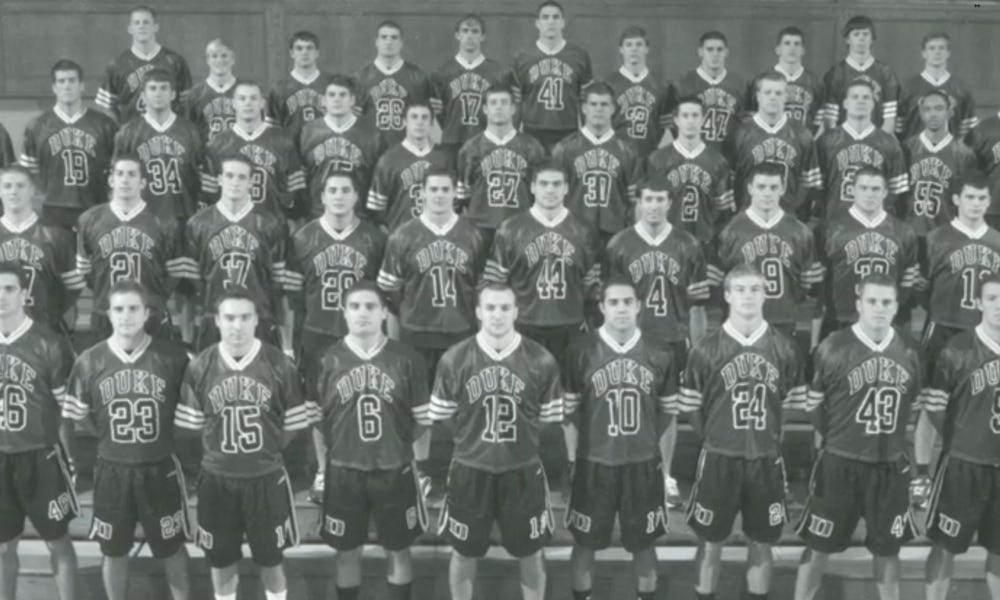 Last night ESPN aired “Fantastic Lies”, which documented the Duke lacrosse rape case and the ensuing fallout. To be honest, I was surprised they aired it given how controversial the case still is and the nature of the subject matter. Good for ESPN for producing and showing it, and the result was one of the best 30 for 30s I have ever seen, and one that couldn’t be more relevant to the social and political climate of 2016.

It’d be really hard to overstate how big of a deal this case was and continues to be in the lacrosse community. It’s the defining moment for the perception of the sport by the general public. How small the lacrosse community was at that time means everyone who was in it is three degrees of separation or less from the case. As someone who played lacrosse his entire childhood, has worked a little in lacrosse, and still am a huge fan of the sport (Notre Dame-Denver was really something, huh guys?!?!) having an honest, unflinching account of what actually happened be nationally broadcasted to people who might not know exactly what went down in Durham in 2006 felt like a huge moment of validation.

While the recounting of the event was honest and real, the bigger takeaway of the documentary was how irrational and dangerous kneejerk reactions by the media and public can be. It’s pretty well documented on Barstool how big of a part protest culture is in campus politics today. While I think people talk about student activism as if it’s something new and created by people born after 1993 and documentaries like this one proves that it’s been around forever, in an age of everyone having a voice via social media paired with a microaggression-obsessed culture where no one gets the benefit of the doubt, people are able to voice opinions without actually having the patience or even the inclination to learn facts. It also shows how events are often immediately politicized and become fodder for an agenda, and the truth of what actually happened and the people affected become either symbols or secondary afterthoughts. No matter how poorly the case was handled by the media in 2004, I have zero doubt that if it happened in 2016, it would have been exponentially worse. The number and intensity of #takes posted on Twitter, Facebook, blogs and whatnot of people rushing to condemn and defend these kids without knowing whether or not they were guilty would be fucking nauseating. Stupid people have been around forever, but stupid people with a voice in an echo chamber where they can find hundreds and thousands of people to agree with them and give them a platform has never existed before (I say that as a stupid person with somewhat of a voice, so I am an expert), and I think we’re trying to find a way to responsibly deal with that.

Of course the biggest tragedy of that case isn’t even the effects it had on people like Mike Pressler or the players involved, who are unfairly affected by the events of that case every day of their lives. The larger consequence is how much harder the state of North Carolina and the media has made things for victims assault today with how poorly they handled the case. It’s no secret that women victims of violence face an uphill battle in the courts to get the justice they deserve, and scumbag opportunists in law and the media like Mike Nifong and Nancy Grace who jumped on this case for their own personal gain make it harder on those women to this day. If there is a Hell, there’s a special place in it for them for that. It’s also really depressing, as one of the defendants pointed out after his innocence was proclaimed, the reality is that this happened to rich white kids who could afford amazing lawyers to defend them. How often people without that type of privilege with the resources to defend themselves probably get railroaded by the state is a scary and depressing thought, as guys like Steven Avery and Brendan Dassey found out the hard way.

All in all, that was a long way to say the documentary was fantastic and worth a watch for any sports fan, but also anyone interested in how much media narratives and politically-motivated people who see an opportunity for themselves can ruin people’s lives. Watch it with an open mind and I think there is lot to be learned. Marina Zenovich should be proud for directing it and a golf clap to ESPN for airing it. Go watch it.