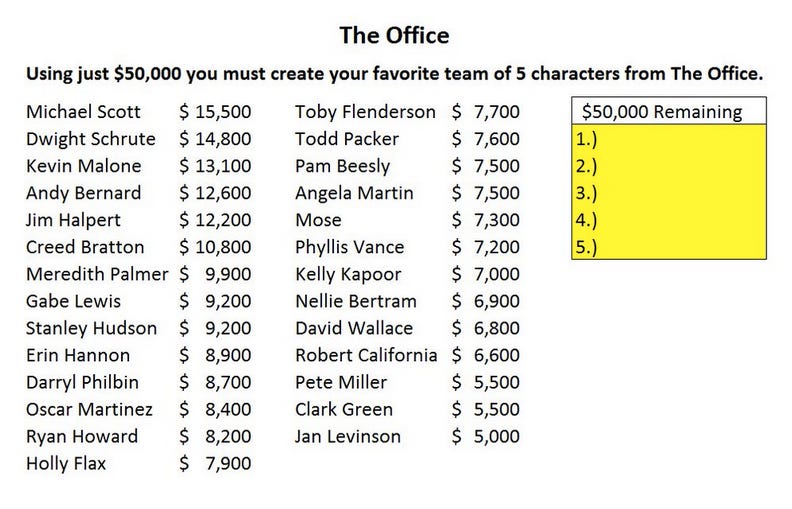 Stoolie Alex tweeted this to me Saturday and I’ve spent every moment since obsessing over it. Of course, that’s partly due to the fact that you kinda have to do actual math on this thing. I mean usually these games are “You have 50 dollars” and every person is a nice, round number but I’m not afraid to admit that I used a calculator on this. In fact, I might put “General Manager” on my non-existent LinkedIn profile now, as this qualifies as balancing a professional salary cap.

Nonetheless, I think I’ve got my five. I’ve honestly switched back and forth a million times, but this is what I’m going with. It was actually my first choice too, before I got to overthinking, which is another feather in the cap for the “don’t think, ever” crowd, a newsletter I’ve subscribed to for 20 years now.

No brainer. This is like taking Kershaw on DraftKings in 2014: he’s always going to be the most expensive and he’s always going to be worth it. The Office doesn’t exist without Michael Scott, if you don’t believe me you can just check the ratings after he left. He is, inarguably, the best character in television history. If Michael Scott cost $50k and all I had to play with was $50k then I would still take him. If you wouldn’t, this game isn’t for you. You’re not qualified to play. 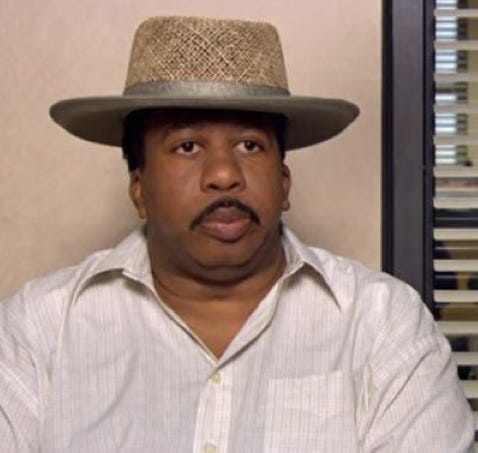 The Jim-Dwight relationship is the one that gets the most headlines, even Michael-Toby gets a lot of play, but I’ll be damned if every Michael-Stanley interaction didn’t have me rolling. Plus, Stanley is the best facial expression actor of our generation. I don’t know anything he’s done since the series ended, but I like to think some rich guy is paying Stan to purse his lips and roll his eyes every time someone says some bullshit. No one does it better. 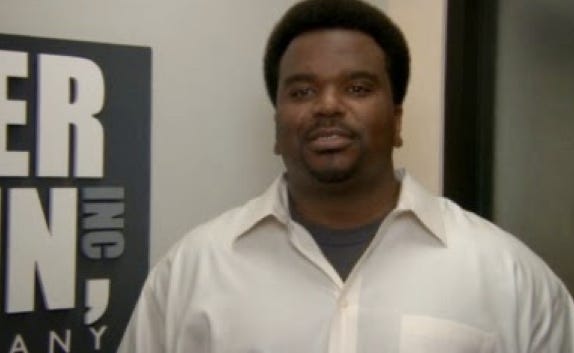 Darryl is, to me, the most normal and levelheaded of all the characters. He’s easily the most likeable Dunder Mifflin employee, and the one I can see myself sitting down and grabbing a beer with. In the world of all these out of control characters you need an hysterical, but sane, guy like Darryl to keep everyone grounded.

PS – I still text BTB regularly, it’s the most overlooked abbreviation of the text game. I wish girls understood what it meant because they never BTB and their lack of comprehension is definitely the only reason they don’t.

Kelly always had the most entertaining relationships, even if they weren’t exactly “healthy.” Both Ryan and Darryl’s dealings with her were always topnotch. Kelly is somehow a character who was along for the whole ride, yet still feels like a bit character. But her line-to-LOL rate is off the charts and has the sabermetrics guys going nuts for this girl. A lifetime of David Eckstein for $7k? Sign me the hell up. Tremendous, tremendous value here. 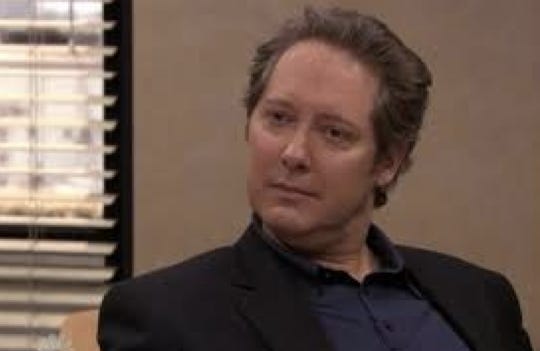 I certainly might catch some flack for this one, and I won’t even fight you if you disagree, but the final seasons of “The Office” were so hated that they ended up being underrated. Was Robert California Michael Scott? Not even in the same stratosphere. But he was an entertaining and interesting character in his own right. I never watched the later seasons while they aired on Thursday nights, they were far from appointment television, but in a quest to fill the void that no new Office episodes left in my life I’ve gone back and watched them on Netflix. Believe it or not, they weren’t horrible and Robert California was pretty great. Scott to California is almost like an alternate universe where we would go from Brady to Bledsoe: the second is very good, just not the GOAT we’re used to.

Leaves me $3k to spend on Roy’s brother. Love a dude with jetskis who’s down to destroy a bar with me for no real reason at all.

Couple more of my notes…

Gabe - Brought nothing to the table. How he’s not in the “take a penny, leave a penny” jar is beyond me. Gabe is one of the worst characters in television history. The fact that he’s the same price as Stanley is INSANE.

Erin - Just a weird, annoying chick who was also worthless. I hated Erin so much that I can’t even watch Kimmy Schmidt. While that show is essentially a zanier 30 Rock starring Erin from The Office, it’s still an impressive feat to be such a hateable character that you ruin an entirely different series. Erin having a higher value than a significant amount of the original cast is a crime in every sense of the word.

Creed - Creed is one of the best bit characters in history and has a LOL rate comparable to Kelly’s, but 10k for him is insanity. Sometimes his weirdness went over the top and it was just tough to take. He was an insane oddball, but not Dwight’s character always had believability to it, Creed’s went over the top a lot. He’s hysterical, and we’ll always have www.creedthoughts.gov.www\creedthoughts, but that’s way too extravagant a number for him.

Holly - I feel bad about this one, as she’s Michael’s love, but, oddly enough considering what I just said above, I have the same feelings as Erin on her. I don’t get it, what does Michael see in her? She’s mildly attractive and mildly funny, that ain’t column one worthy. That ain’t sponge worthy.

Wallace - Without a doubt the toughest to leave off my list and if this were a game with MLB salary cap laws I would happily pay whatever the luxury tax would be to have him on my squad. I’d pay a 100% tax rate. But, rules are rules and this one just came down to small sample size. It breaks my heart to leave a Stoolie out of the top 5 but I need more than parts of 4+ seasons out of my starters.

Jan - Stop me if you’ve heard this one before: I love the crazy chick. Something about a woman that makes you think she’d kill you that gets me going. I hope I grow out of it one day, but that day isn’t today.