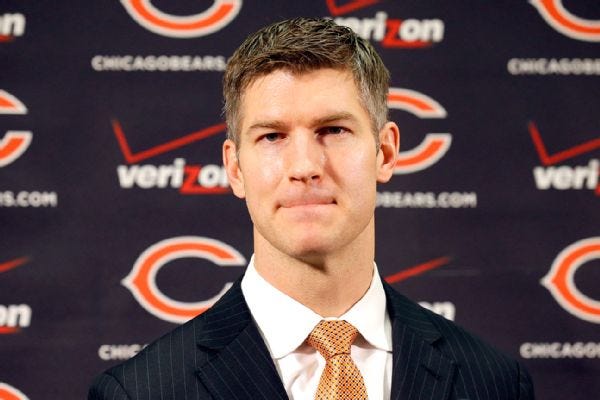 How about Ryan Pace just getting to work right away. He’s got no time for UConn buzzer beaters or West Virginia’s fresh out the nipple Oberweiss milk. He’s got a damn team to build.

Let me first start with Trevathan and Freeman. Huge, huge , HUGE signings for a team that hasn’t had a competent inside linebacker since Urlacher retired. I’ll let you go read the scouting reports about both players from the 1 million beat writers we have in Chicago, but just know that the Bears weakest position last year was without question insider linebacker. Signing an inside backer from one of the best defenses in the league and then another one who was rated the #1 insider linebacker against the run by Pro Football Focus should make us all happy.

That just about seals the second line of the defense with McPhee-Freeman-Travathan-Young/Houston. Obviously  Young and Houston aren’t locks but I thought they both made an impact in the limited time that they had and I’d like to see them battle for the spot.

The Massie signing caught be a little off guard. There’s no question that the offensive line needs to be shored up a bit but Bobby Massie seems like a stop gap. He’s a strong run blocker but leaves a lot of be desired in pass protection. It’s good that Long gets to move back to guard and be dominant again, but I gotta admit that I’m a little worried the amount of time Cutlers going to have to throw the ball.

I thought all of the re-signings were no brainers as well. Hopefully Jeffery doesn’t pull the same shit he did last year and will spend his majority time on the field intend of the sideline. Tracy Porter got a nice deal for a corner about to turn 30 and good for him. He played well last year and we can’t find an up and coming mid 20’s cornerstone for every single position yet. Porter will have to do for the next couple of years until we can reach an overhaul at every position. Hopefully Fuller figures it out so we won’t have to worry about the opposite side of the field.

The only thing I’m upset about is not re-signing Jarvis Jenkins. He had a good year on a league minimum deal and considering the Jets didn’t give him much he could have easily been in blue and orange next year. Oh well, in Pace we trust at this point.

P.S. He’s gonna go best available but you got to assume the edge rusher is gonna be the play at #11 now

Bears signed Akiem Hicks after I wrote this blog. Absolutely love it. Get that big motherfucker in the middle taking up space to make Trevathan and Freeman’s job easier. I hate to get ahead of myself because the offseason “winners” always seem to get laughed at, but after two excruciating seasons it might be time to get excited about the Bears again.