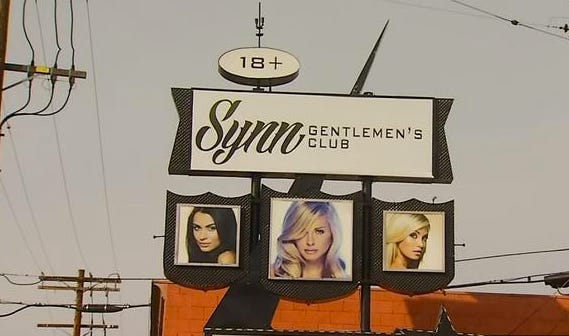 NBC LA - A 9-month-old baby girl was found alone in a car parked outside a Southern California strip club while her father was apparently inside the venue Wednesday afternoon. People near the parking lot at Synn Gentleman’s Club near Roscoe and Sepulveda boulevards in San Fernando Valley saw the child in the car after hearing her cry, according to Senior Lead Officer Charles Chacon of LAPD’s Mission Division. The concerned passers-by opened the car door to get the baby out and called 911. “In the midst of them calling the police, the father came out from the strip joint and basically wanted to take the baby,” Chacon said. The little girl was taken to a nearby hospital and was suffering from mild dehydration. “I thought it was unbelievable. I could not believe a father would put his child in that type of danger,” Chacon said. The man was arrested on suspicion of felony child endangerment.

There are about 1,000,000 reasons I’m not ready to be a father, but at the tippy top of the list is the fact you can’t just do anything on a whim. I’m a big whim. Sometimes you just gotta drive to the Casino on a random Tuesday, ya know? Sometimes you gotta go to the bar and get blacked out on a Thursday afternoon. And sometimes you’re driving down the road, see a strip club, and you gotta pull over and go to the strip club. Sure you have a 9 month old baby sitting in the back seat, but sometimes you have to scratch that itch. Can you imagine not being able to scratch that itch? It’s that feeling when you know you shouldn’t send a text to a girl, but your body NEEDS that release, that feeling when you finally hit send. Same for pulling into a strip club when you have your 9 month old with you. You know you shouldn’t, but you look back at her, she’s sleeping in her carseat, and you know you can run in, get a quick lap dance, maybe get a quickie in the back, and be back before the kid even wakes up. So if you can’t control that impulse, maybe don’t have kids.

But on the other hand, it ain’t no sin goin to the scrip club. Sometimes you gotta be rebellion.