I’m so glad Kimmel put this together because it’s been bothering me for the longest time. Trump says literally EVERYONE is his friend. Everyone. “Friendamine” is a new word that he invented this election season. Every person brought up, according to Trump, is a friendamine. Elton John? Friendamine! And that might be reason number 1 you can’t trust Trump. Anyone who claims they have that many friends really has no friends at all. He’s the kid in school who thinks everyone likes him but really they just want to go to his house for the free booze. People tolerate Trump because he does have money and power and can be very convincing. But I would love if they asked all the people who Trump claims to be friends with to see if they also consider him a friend. If I had to bet, Trump paid money for a table at their fundraiser and that is qualification enough for the Trumpster.

PS: What’s his deal with the New Day? Don’t ya dareeee be sowaaaaa, Donald! 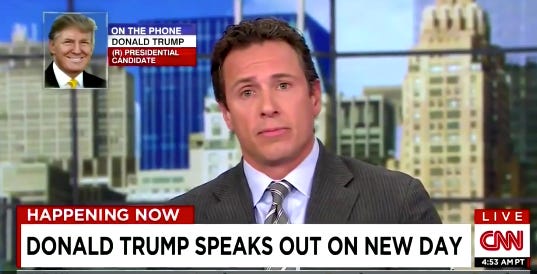