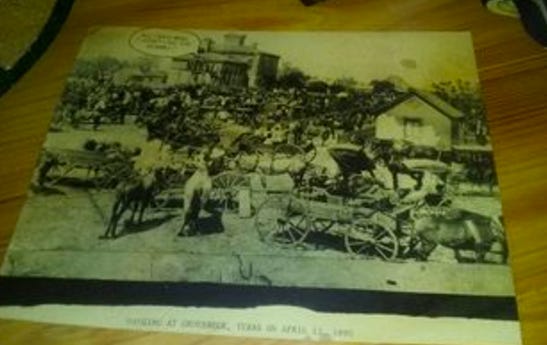 ABC 10 - Joe’s Crab Shack is under fire for using a photo of a black man’s execution as table decor.

According to the Minneapolis NAACP, Tyrone Williams and Chauntyll Allen were preparing to dine at Joe’s Crab Shack in Roseville on Wednesday night when they noticed a photo embedded inside the table. It appeared to show a large group of white people watching a public execution of at least one black person. On the bottom of the picture, it reads: “Hanging at Groesbeck, Texas, on April 12th, 1895.” At the top, the caption reads, “All I said was that I didn’t like the gumbo.”

“Although the manager was apologetic about the lynching depiction, that does not change the fact that this sickening image of black men being lynched was intentionally embedded inside of a table,” Williams said. “This type of blatant racism should not be tolerated in this country, or in our local and national eating establishments. I have felt sick to my stomach and stressed out since seeing that image on the table where I was planning to eat my food.”  Allen said she could not believe the image was used so casually.  “Seeing a picture of two black men being lynched was the last thing that I expected to see at what was supposed to be a family-friendly restaurant,” Allen said.

Hey you, stop laughing. This isn’t funny. But it is absolutely ridiculous that they put this picture inside of a table with that speech bubble. Like, unfathomably ridiculous. I think even the people who spotted it, when this all dies down, could take a step back and laugh about it. Like, how in the world does that happen? I’m trying to put myself in their shoes. Nice African American family going out to dinner, gonna enjoy some crab cakes and oysters. They look down at the table and see a fucking lynching scene staring back at them. They probably couldn’t even believe what they were seeing. Like, hey come look at this, are you seeing what I’m seeing? It’s something straight out of a movie. Like if I saw this in a movie I would be like “heh, good bit”.

I don’t know if it’s Joe Crab Shack’s fault, or if they buy their tables from vendors, or what, but I wonder how many white families have sat at that table and noticed it and not said a word. I also wonder how many black families have sat at that table unknowingly. Somewhere, some troll who was either fed up with the table company or Joe’s Crab Shack is having a good laugh. His plan finally worked out.

PS: It’s so incredibly racist with that speech bubble. I surprised they aren’t suing for 100 million dollars. Like, it is bad enough there was a photo of a bunch of white people about to watch a hanging, but then that speech bubble multiplies it by a billion trillion infinities. I’m still trying to imagine black people going out to dinner and then seeing this. It really is straight out of a movie.