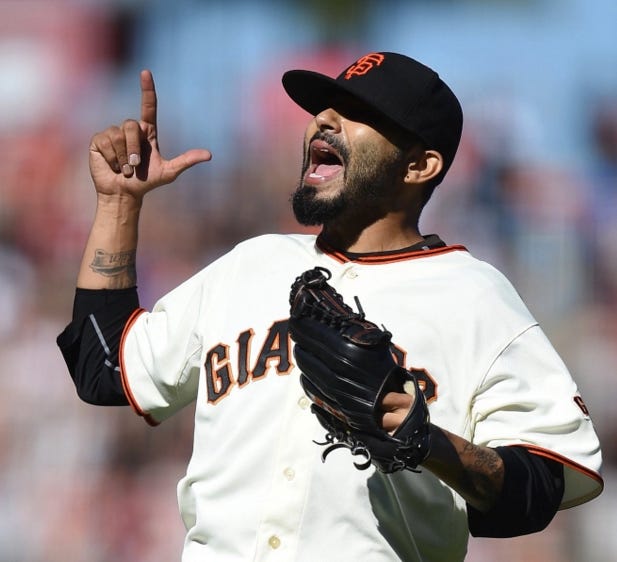 NBC - On Thursday morning, Tim Keown of ESPN The Magazine published an intriguing feature on Nationals outfielder Bryce Harper. The article is great for a number of reasons, but one particular quote from Harper made the rounds, as he called baseball “a tired sport” because “you can’t express yourself”, i.e. with bat flips and fist-pumping. Giants reliever Sergio Romo got wind of his and disagreed. Per Carl Steward of the Bay Area News Group, Romo said, “Don’t put your foot in your mouth when you’re the face of the game and you just won the MVP. I’m sorry, but just shut up.” It’s rich coming from Romo, who is himself very demonstrative on the mound.

Romo justified his actions, saying, “As emotional and as fiery as I am, I do my best not to look to the other dugout. I look to the ground, I look to my dugout, to the sky, to the stands.” He continued, “I don’t agree that being able to put your hands up when you hit a 500-foot home run or punching somebody out and then staring them down, I’m sorry, it doesn’t add flair to the game. That’s showing up the other guy.” Romo also offered career advice to Harper. He said, “I’m pretty sure if someone has enough money, he can find another job if this is really tired.”

First of all, nobody knows who Sergio Romo is. Just one of a billion relief pitchers in the majors. But because I’m a world renowned blogger, I looked him up, and yep, he’s irrelevant. But not only is he irrelevant, he’s the world’s biggest idiot and hypocrite. Why? Because he fucking throws a ticker tape parade on the mound after getting a strike out.

And Sergio’s argument doesn’t even make sense. That’s the major issue here. He’s saying Bryce “put his foot in his mouth?” Uhhhh, I’m not sure that means what you think it means, dummy. Bryce talks the talk and walks the walk. Not exactly putting his foot in his mouth at all. Now this is an example of putting your foot in your mouth:

“I don’t agree that being able to put your hands up when you hit a 500-foot home run or punching somebody out and then staring them down, I’m sorry, it doesn’t add flair to the game. That’s showing up the other guy.”

Cannot wait til Bryce puts one into orbit off this guy’s candy ass.