This is a quick recap because today was so completely boring. Barely any mention of Hogan’s cock at all. So what happened today? If you recall from yesterday, they brought in a witness, a journalism professor from the University of Florida, who is an expert in journalism ethics and morals and the like. Well today, Gawker’s smarmy, straight out of a movie lawyer who I hate more than I hate ISIS got to question him. And boy did he ever. Something like 4 hours of questioning, none which made any impact on the case. The lawyer was comparing the Hogan sex tape to Madonna taking nude pictures of herself and Demi Moore’s Vanity Fair magazine cover where she posed nude. It was very, very strange the stretches he was trying to make, but nonetheless, it went on for 4 hours. The journalism professor was having NONE of it. Zilch. He was not giving the lawyer an inch. The lawyer kept pressing and pressing though, and eventually after 4 hours tried to land on the basis of “press has free speech”. I’m new to the lawyering game, but I was not impressed. And if I was on the jury, I’d be annoyed as fuck that I had to sit through that.

Well, luckily, Hogan’s lawyer also got to talk to the professor. And it was a hoot. This is how it went: 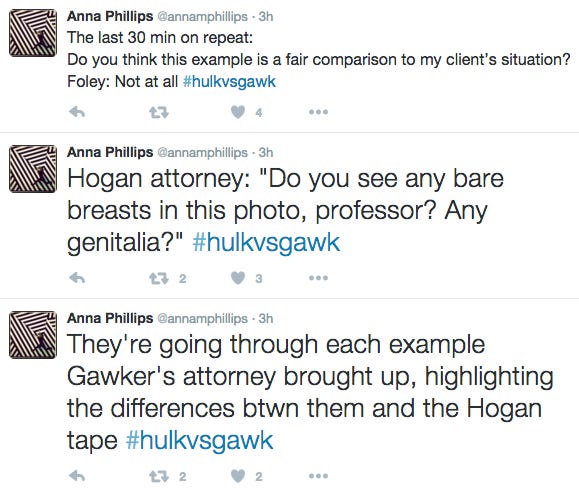 Basically Gawker’s main argument is since Hogan had discussed his sexual history (including penis size) in the past, he doesn’t have the right to privacy when it comes to the sex tape. Hogan’s lawyer was like “so because Madonna took naked pictures of herself and put them in a book, does that mean anyone can secretly film her having sex and publish it?” Obviously, no. Lawyered. And it went on and on. Because Demi Moore voluntarily posed nude on a magazine, does that mean you can film Hulk Hogan having sex without his knowledge? No, obviously. 4 hours of the Gawker lawyer going on and on and on in his condescending ass voice, only to be whipped, dominated, and taken out back by Hogan’s lawyer in about 20 minutes. Very bad attempt by Gawker’s lawyer in my very unprofessional opinion.

The only other thing of note was they talked a lot more about how Gawker benefited from this, in terms of page views, traffic, advertising revenue, etc. Which, as I discussed earlier today, is a tricky topic for me because everything we do here is for pageviews, the difference is we don’t pretend to be doing otherwise, like Gawker does.

They want to have their cake and eat it too, and it’s just not flying.

If you want to catch up on everything that has happened, here’s your links, in order: