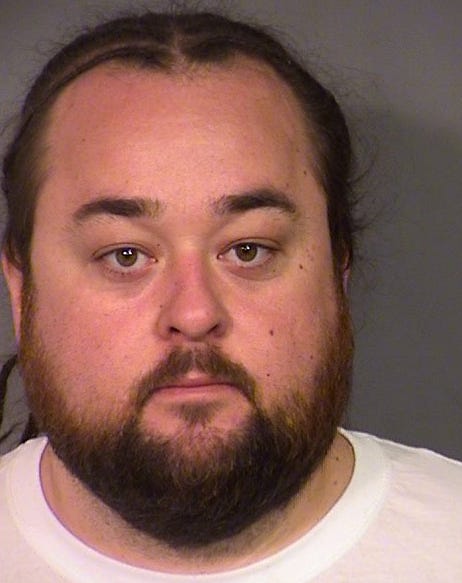 B911 – Austin Russell AKA ‘Chumlee’ of Pawn Stars fame, was arrested on weapons and drug charges during a raid at his Las Vegas home. According to TMZ, Las Vegas Metro Police entered the residence in connection with a sexual assault investigation. Cops found marijuana, meth and a weapon during the search,’ the report said. Russell is a suspect in the sexual assault case, but has not been charged with a sex crime. He was being detained at Clark County Detention Center. A spokesperson for Las Vegas Police Department said that the investigation stemmed from a recent complaint by a woman. Russell, aged 33, was not booked on the sex-crime allegation.

Chumlee? A meth head? Get out of town! No, you get out of town! I’m shocked. Truly shocked. Weapons, drugs, and a sex crime for the fat guy who grew up working in the scummy part of Vegas working at a pawn shop? I’ve taken out a piece of scrap paper, I did the math, and it just doesn’t add up. Can’t believe Chumlee isn’t well adjusted after going from scummy pawn shop worker to superstar millionaire scummy pawn shop worker. I will be darned. Best part is they raided his house for the weapons and drugs, and he has this whole other sexual assault case on the back burner. That’s just the Chumlee life though, I suppose. You can take the man out of the slums but you can’t take the slums out of the man. All you can do is fill his pockets with that TV money and hope for the best. I don’t so much care that he has guns and meth, I’d be more shocked if he didn’t turn into some ridiculous Vegas degen. He was about a month away from having to come into his own pawn shop and sell some of his own shit to himself for a ridiculously low price. Which by the way, is always my favorite part about Pawn Stars. The guys look these sad saps in the face and are like “oh that, yeah it’s worth $10,000, best I can do is $12.50″. Like you motherfucker, go somewhere else and sell it for a better price! But those Vegas lowlifes need the money ASAP so they can go pull the slot machine knob 1,000 more times “to get it back” and round and round it goes.