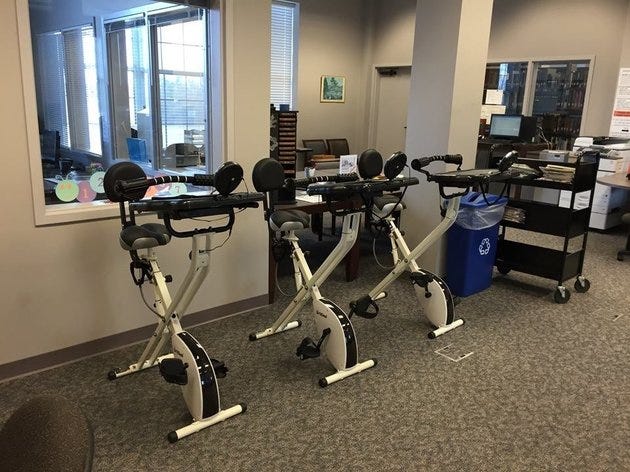 Huffington Post -Troy University in Alabama is making physical health part of its core curriculum by installing exercise bikes — with a spot for a laptop or book — in the library so students can break a sweat while they study. “Humans were not meant to sit still all day,” Christopher Shaffer, dean of Library Services told HuffPost. “But because our lives all revolve around computers now, we don’t move enough.” In an attempt to break the vicious cycle, three exercise bikes were assembled and ready for use, last Thursday. And due to positive response from students, the library has already ordered three more. If they’re used, Shaffer believes the library can squeeze in an additional six bikes, making it an even dozen. The library is also planning to add six elliptical machines that can go under desks or tables as well. “For now [the machines] are first come first serve,” Shaffer said. “If riots break out, we will develop a reserve system.” Shaffer heard about exercise bikes that allow students to study two months ago when he stumbled upon FitDesk, the company that makes them. The bikes were reasonably priced, which meant it would be easy to buy a few and see how they were received.

Well, they did it! They finally found a way to make the library even more miserable than before. Everyone knows the library is the single, worst, most terrible building on every college campus. Seriously, it’s filled with adderalled-caffeinated-zombied college students and it’s eerily quiet. Gross. Now they want you to exercise while studying? I literally cannot think of anything worse. Not to mention the machines they chose to put in the library are those god awful bikes. Those bikes are the fucking worst. I call them “the bikes to nowhere”(I’m hilarious I know) They suck while you’re on them and they suck even more the next day when you feel like you got punched in the ass/vagina by Hulk Hogan. The whole concept sucks the bikes, the library, everything about it.

Also, can you imagine the type of obnoxious asshole who’s gonna go to the library and get on one of those bikes? Someone who deserves a swift kick in the nuts for doing wayy too much. That’s who.

P.S this is all coming from a bitter place about those people who like to workout and who like to study and I acknowledge the fact that working out while you study is actually probably really good for you.