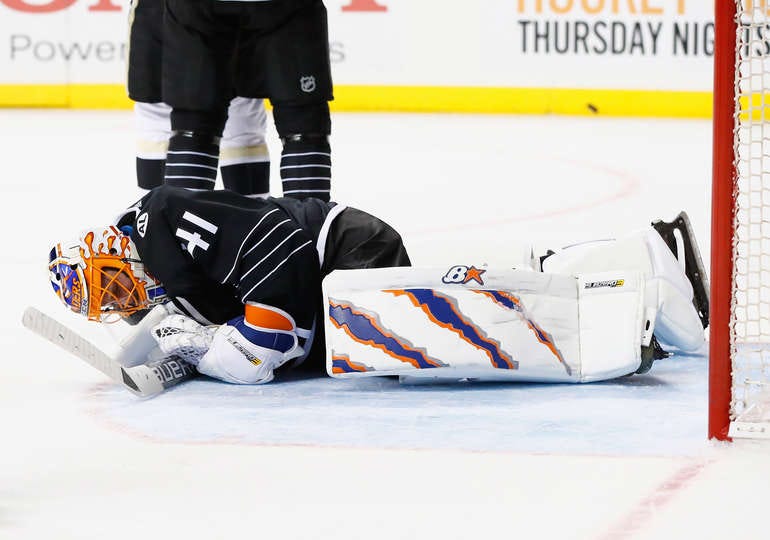 When Jaro Halak ended face down on the ice following a routine pad save with 5 minutes left in last night’s win over the Penguins, everyone knew to immediately expect the worst.

Non-contact injuries are just about the worst three words to hear when it comes to goaltenders. It normally means some sort of muscle tear/strain, which in turn, normally means extended time off the ice. In Jaro’s case, it means the remainder of the season.

All year Jaro’s job as the team’s #1 goalie has been put question. Much thanks to his [arguable] regression compared to last season, as well as Thomas Greiss’ outstanding play while taking the minority of starts.

Now throw in JF Berube, who the team has been carrying around as a 3rd goalie all year, and you have yourself quite possibly the best answer to an NHL starting goalie going to IR as you’ll ever find.

Greiss’ current Save% (.930) is good enough to lead the league, but it’s his lack of starts that has people questioning just how real his numbers are this year. With it now on resting him to lead this ship into the post season, it is how he responds to the added workload that will ultimately define his first year in New York.

In year’s past, losing Halak, or Nabby, or any #1 goalie would for sure lead to an Islanders collapse, but with Greiss Almighty moving into the role many have been begging to see him in since November, the Islanders might have just gotten better with this move.

What’s a playoff push without a few curveballs?