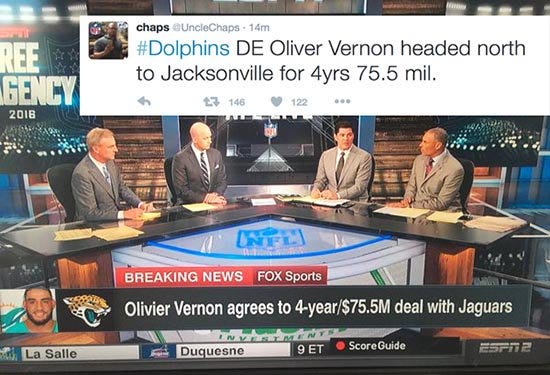 ESPN is having a pretty awful day. They start it out by demoting top 5 NFL Countdown personality/guy who still probaly calls his coworkers “orientals”/person who one time farted on Big Cat Mike Ditka to all the weird NFL shows that air at inconsistant times. And now they get fooled into running a rumor that was so false that I’m shocked it didn’t take them 9 months to retract it.

Our good friend @UncleChaps briefly morphed into Fox Sport’s Jay Glazer on twitter, and claimed the Jaguars had signed Dolphins DE Oliver Vernon to a 4 year, 75 millon dollar contract, and ESPN ran with it.

Clue number one that this was fake should of been the fact that ESPN was actually giving credit to Glazer instead of doing a find & replace on his name for “media sources.” But more importantly, we can chalk this one up for all-around exellent human being, my personal friend, and friend of the site Ian Rapoport who would never get fooled like this. Ians too busy breaking his own news to report on someone elses. A lion doesn’t concern himselves with the opinion of sheep.

Now look how mad Schefter is to be admitting to this mistake. Adams totally on the ropes now second guessing the one thing he truly loves-his own cell phone and playing on tilt. Nows the time when you stack up the wins on him, Ian. Put him all in and take him out.

PS I know my Brady/Manning takes pissed off alot of Pats fans this week (still number 1 ranked article of the week NBD), so consider this my peace pipe. Theres one thing we can all agree on is that its always good fun to see ESPN screw something up. God bless you all, and god bless football.