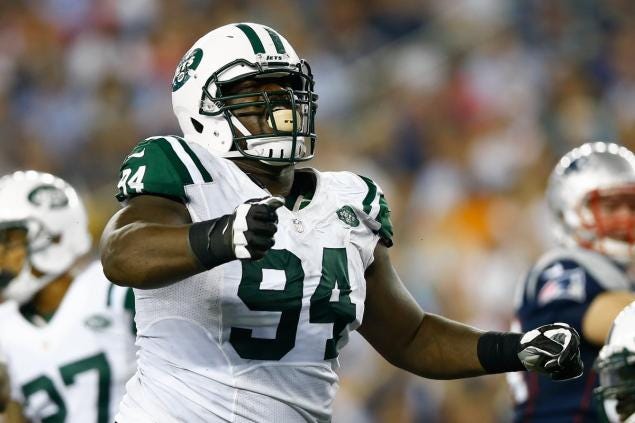 Another big-time fetch for Big Blue. On the heels of locking up arguably the top FA corner, the Giants snatch the top run-stuffer in the league last year from their cross-town rival Jets. All 350 pounds of Damon “Snacks” Harrison will be playing beside Jonathan Hankins to form a LEGIT interior tandem. Outside of stopping the rush, Big Hank & Snacks will collapse the pocket to make it easier for JPP and whoever’s on the other edge (come on, Vernon) to get to the QB. The big bastard simply doesn’t miss tackles (or games), which has been an unfortunate staple in the Giants scheme the past few years.
The rumored $9.25M/per & $24M guaranteed price tag is another that might seem kinda high (would be easily in top-10 of all DTs) but NY is in a position to overspend a bit to get the guys they need. Harrison is a major upgrade over the Jenkins’, Bromley’s & Kuhn’s they’ve been trotting out. He’d be a major upgrade over just about anyone, honestly:

Best part is, there’s still plenty of cash for Reese to sling around. He’s only burned about half of it. No one that’s been on the Giants’ radar is now off because they can no longer afford them. Exciting start to the Big Blue shopping spree, and it’s far from over.