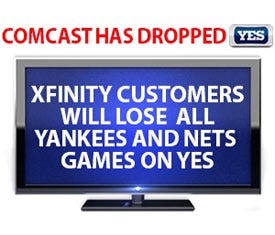 YES – The New York Yankees’ biggest foe this season won’t be the Boston Red Sox. It will be Comcast Corp.

The cable giant and the YES Network, the television home for the Bronx Bombers, have not reached agreement on a new carriage deal for the channel. Now, YES-parent company 21st Century Fox is launching a multi-million dollar marketing campaign telling fans they need to change pay-TV distributors if they want to see the Yankees this year. Depending on the market, options for consumers could include providers such as DirecTV or Verizon Communication Inc.’s FiOS.

“We felt we had no choice but to let our customers know if they want to watch the Yankees they have to switch,” said Tracy Dolgin, president and chief executive of YES.

YES went dark on 900,000 Comcast homes in New Jersey and Connecticut last fall after the baseball season ended. Comcast said the price the network was seeking for a renewal was not justified by the channel’s audience size. According to industry consulting firm SNL Kagan, the monthly subscription fee for YES is $5.36 per-subscriber.

As the season gets closer I’ve been getting more and more questions about what is going to happen with this, and all along I thought that this would get resolved before the season started. I assumed that much like in the case the YES dispute with Cablevision in the 2000’s someone would come in an mediate to find a solution. Now it looks like that may be the case and if you look at both sides, you can see why we’re here.

For Comcast, you can see how they don’t want to pay over $5 per month for a Network that’s main draw only plays half the year. If the Nets were better or there were more original programming (I’ll gladly make a show for you YES) there would be more or a demand for the network to be on Comcast for the last few months. Without that additional demand, it’s tough for Comcast to justify that price per-subscriber but they forgot 2 keys items. YES is owned by Fox now, which gives them more leverage than in the past and Yankee fans will riot if they can’t watch the Yankees play. I want to say people hating Comcast is a factor, but they’ve never cared about that.

For YES it would be nice if they lowered the price just so fans could watch the games, but this is a business and they need to make money. On top of that, so many people are cutting the cord and getting rid of cable in favor of online services, that striking another blow against “big cable” brings them closer to being able to expand the offering to people outside the NY market without a middleman. We don’t know the details of the hangup but the word is that the price is fine, but Comcast wants more exclusivity to content which has been a problem for cable companies for a while.

If you have Comcast this is a pain in the ass, but in all likelihood you wanted to get away from them anyway. So in the long run the Yankees just helped push you to make the jump to another service that you hopefully won’t hate.
Follow @BarstoolJJ