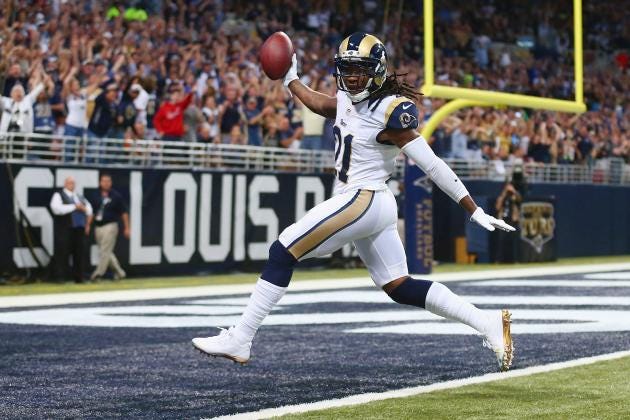 Adios Prince, hello Janoris Jenkins. While most of us were sleeping, the Giants & Jenkins went into stealth mode to hammer out what’s expected to be a 5-year $62.5M deal ($29M guaranteed) that’ll make him the second-highest paid corner behind Revis. Big bucks for sure, but with money to spend it’s the right move to end the Amukamara relationship & lock up a 27 year-old big-play CB to take his place. Jenkins has been a boom-or-bust guy at times but is coming off his best all-around season and, if nothing else, will actually be on the field. The soon-to-be new Giant hasn’t played less than 14 games in his first 4 seasons. Prince has played more than 13 just once in 5.
After inking JPP and the expected Jenkins signing, Big Blue have two pieces done in a puzzle that still requires plenty more when free agency officially opens at 4pm. Olivier Vernon is the premier name still being floated around for the Giants, especially since the Dolphins have removed the transition tag from their 25-year old pass-rusher. He’d cost a boatload, but it’s a price the Giants can still afford. Some interior d-line help could come from their cross-town rival Jets as Damon “Snacks” Harrison is another player in his prime (27) the G-Men are looking into. Thinking about a line of Hankins & Snacks in the middle of Vernon & JPP gets me all tingly, but who knows what’s gonna happen once the 4pm gun goes off. For now though, it looks like DRC’s got a new pal across from him looking to make up the elite tandem Prince never could from the sidelines.