I’m not really sure how to explain what just happened. While the first half of the day we discussed the difference between Terry Bollea’s dick and Hulk Hogan’s dick

After the recess we got a slow, boring testimony from the guy who set up the camera’s in Bubba’s house…including one special camera that was wired directly to a DVD player. But then things got real good. Real, really good.

First up was current Jezebel editor-in-chief Emma Carmichael. We all know Jezebel, a feminist blog on the Gawker network, who believe the people who leaked the pictures in the fappening are worse than the Devil and that size 6 skinny jeans are for everyone, shit like that. Well would you believe it if I told you that Emma Carmichael is the person responsible, along with AJ Daulerio, for posting the Hogan sex tape on the Internet? Would ya imagine that? Let’s just say her questioning did not go too well for her, as she was hammered with questions about how Gawker does everything for pageviews, to which she tried to say “no” to, but then she was hammered with questions about why she then wrote a blog at the end of the year showing what blogs received the most pageviews.

Also, interestingly, the 100 million dollar lawsuit didn’t stop Emma from making a few wackies about the sex tape she okayed to put on the Internet

Emma also lied through her teeth with this one. 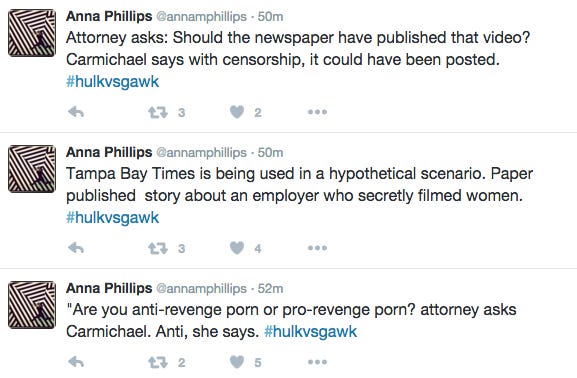 So after that hypocritical bitch was done looking like a seaward, this dude John Cook got up to answer some questions, and let me just say, to quote myself, it was a doozy. I don’t know how the conversation spiraled out of control, I can’t rewind or anything to hear it back, but eventually the conversation became about if Hulk Hogan’s dick wears a do-rag and if his pubes are bright yellow. Warning: all your chats, they can be read out loud in a court room. All of them,

And thus wraps up day 2 of the trial. If I had to guess, Hogan will get paid. Gawker came off terribly and Hogan’s reliance on saying anything he did or said wrong was his character, Hulk Hogan, doing it and not Terry Bollea, works perfectly.

If you want to catch up on what you’ve missed, here you go, in order of my first blog about this trial from June 2015:

Back at it tomorrow. Can’t wait to see what we have in store.