(DailyMail) — A woman who stood between an armed police officer and her dog has been acquitted of obstructing justice. Tiffanie Hupp, 23, was arrested on May 9 last year after she stopped West Virginia state trooper Seth Cook from shooting her dog Buddy, who was chained to a wall at their home in Parkersburg. During a jury trial which was concluded on February 29, Cook said he had been trained to shoot dogs, whether or not they are chained. Cook had been called to the property to solve a dispute between Hupp’s husband’s stepfather and a neighbor.

Was this the easiest case that Tiffanie Hupp’s lawyer has ever tried? That dude must have walked into the police station like he was Johnny fucking Cochrane. If you get me ONE dog owner on that jury, I’ll get you a hung jury and you’ll go home. If you’ve so much as pet a dog then you couldn’t find this chick guilty. Laying her life on the line for an adorable bundle of joy named Buddy? Good luck spinning that one as upholding justice.

But this is bigger than one case, if you ask me. We need to work on the way cops are trained. Shoot on sight, even if they’re restrained/unarmed? What about shooting him in the leg? How about a taser? Or mace? Buddy wasn’t even acting very out of control at all, he was simply being a little mouthy. Just ridiculous that police think it’s OK to go to such extremes, in my opinion. You’re trained to deal with difficult circumstances, your first reaction shouldn’t be to reach for a gun and take an innocent life when you feel a bit threatened just because you have a predisposition toward thinking dogs are violent. One man’s opinion, that’s all.

PS – This is the saddest still in history. Buddy just looking cute as all hell with a fucking gun at his temple. I might cry if I keep writing this so that’s all I’m going to say on the matter. 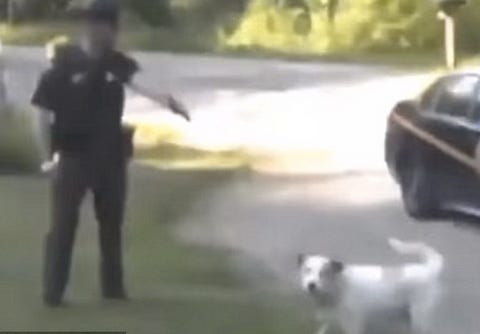