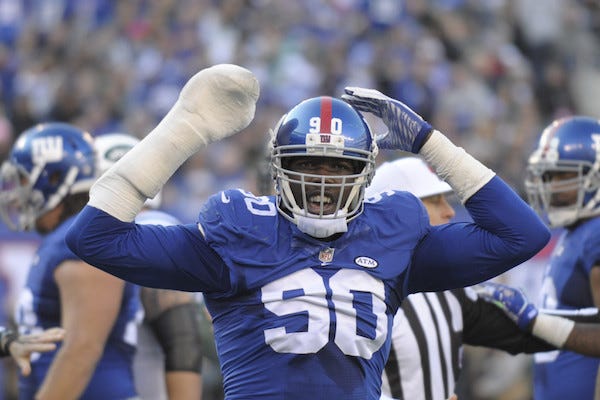 Well the biggest domino in the Giants offseason just fell in their favor, with JPP electing to stay in blue. Now I’m not sure if he turned down more money from a trash team or what, but obviously whenever a guy does something like that, it makes you feel all warm and tingly inside. And if he turned down more money from a team as good as the Cardinals, that’s awesome. But this is probably what was best for JPP and the Giants. Big Blue’s doctors know more about his hand than anyone this side of Adam Schefter and Jason gets a one year deal to prove that he can wrap up NFL athletes with 7.5 fingers and hope to strike it rich in free agency next year.

The best part about this is that the Giants and their fans don’t have to talk themselves into lesser pass rushing options. When it looked like there was a chance JPP wouldn’t return, I was thinking about having to fork over a ton of that Mara/Tisch fortune to Mario Williams and hoping he would care enough to make a difference on that terrible defense. And that scared the living shit out of me. Granted, we don’t know if JPP will be what he was with a full set of digits. But the talent is there. We all know it. You would think he will continue to improve with that hand as he gets used to his club. Or at least I really, really, really, really, really hope.

Now Jerry Reese still has a lottttt of work to do and a lot of money to do it with. Whether that goes toward building this team into a contender or lighting it all on fire like The Joker in Dark Knight remains to be seen. But it’s March. Lets try to be positive while the Knicks take up all of our pessimistic thoughts. #InReeseWeTrust (again, I don’t truly believe this, but it’s positive vibes only for now).