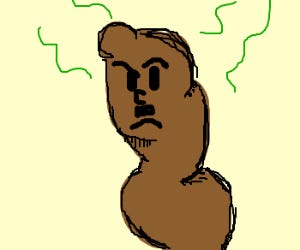 NYDN- As if Adolf Hitler wasn’t crappy enough, a new report reveals that the Nazi leader had a love for “poo sex” and “big round” butts. In a top secret spy report, documents allege that Hitler was a “coprophiliac” — someone who was turned on by poo. He wanted women to stand over him while he was lying down and have them defecate over him, the Sun reported.

The report, “A Psychological Analysis of Adolf Hitler His Life and Legend,” was produced by Walter C. Langer and was commissioned by the U.S. Office of Strategic Services to get inside the mind of the dictator and dig up details of his personal life. The same document is where the information of Hitler’s “micro penis” and descended testicle first came about. “The practice of this perversion represents the lowest depths of degradation,” Langer said. The evil Führer allegedly performed the disgusting act with his niece Geli Raubal, who disclosed the information to Nazi supporter, Otto Strasser, causing him to flee the regime.

And this folks is why you don’t start a World War and be the biggest scumbag the world has ever seen. They say winners write the history books. Well the sons and daughters of those winners are able to write as well. And they are going to write that the losers had tiny dicks and loved getting shit on.  Especially if you were the Fuhrer of Germany.

Now let me say there is nothing wrong with having a tiny dick or enjoying shiza sex.  The last thing in the world is having Tiny Dick Twitter or Shiza Sex Outrage Groups coming at myself and my employer by saying that we are tearing down safe spaces on the Internet.  But I am pretty sure this is what people mean when they say “All is fair in love and war”.  You murder millions of people for no reason at all, people are going to say you were a piece of dog shit that probably liked steaming piles of human shit on top you.  So protect ya neck, Kim Jong-un. We live in a 24/7 news cycle with social media. People probably won’t even wait for you to become a corpse before they start spreading rumors. Take your finger off the nuke button, have whatever kind of sex you have/don’t deserve and just enjoy life.