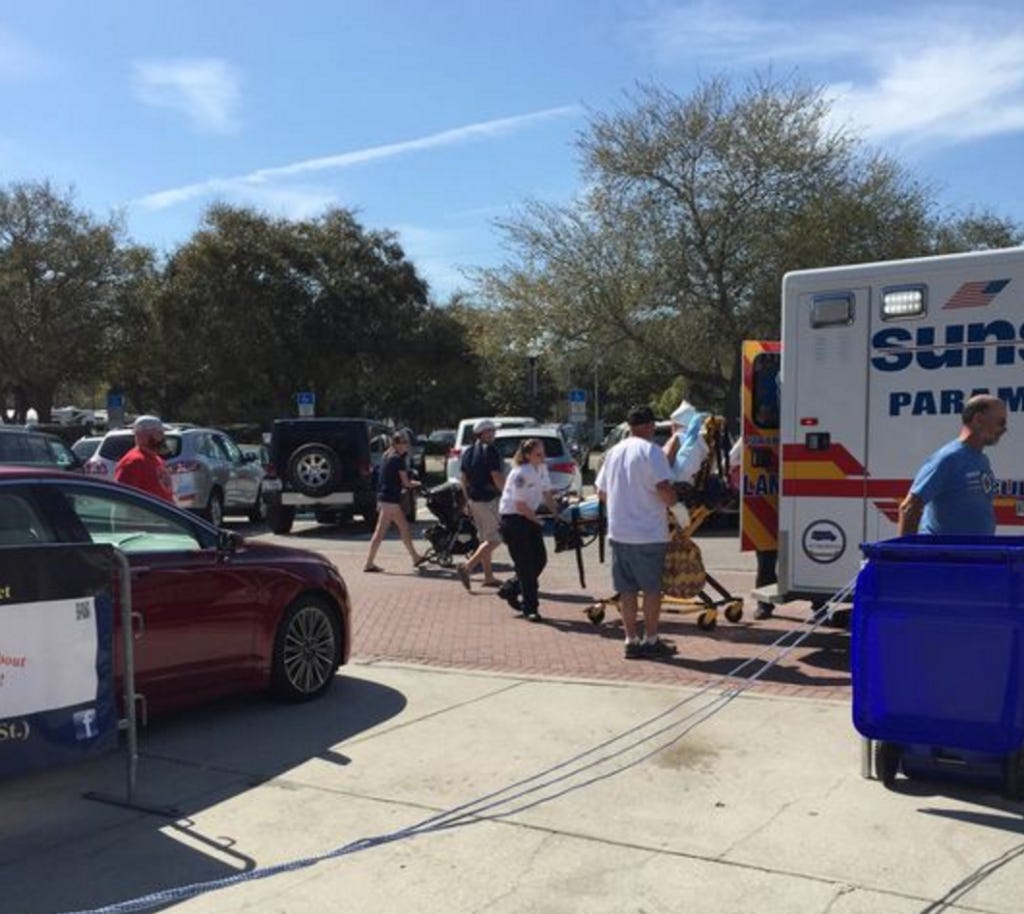 (USA Today) – A 59-year-old woman suffered blunt force trauma when she was struck in the head by a piece of a broken bat during Monday’s Toronto Blue Jays exhibition game at Florida Auto Exchange Stadium.

Pam Henderson, a Nova Scotia resident and Blue Jays spring training season ticket holder, was injured when Atlanta Braves designated hitter Kelly Johnson’s bat shattered as he grounded out in the sixth inning Tuesday. The large end of the barrel flew high into the stands and struck Henderson and her husband, Bill, who suffered an injured wrist – and his watch shattered – as he tried to shield his wife from the bat shard. Henderson was taken by ambulance to Bayfront Medical Center in St. Petersburg.

Emergency personnel at the stadium were summoned immediately, and Henderson – her face heavily bandaged – was taken from the scene. A Dunedin Fire and Rescue EMT radioed that Henderson suffered blunt force trauma.

See, this is why I’m not complaining about the MLB suggesting that teams extend their netting further down the baselines. The fans who are, or were, opposed to this adjustment most likely had baseballs in mind when MLB made the suggestion that extra netting would be in teams’ best interest. Get off your phone, pay attention, blah, blah, blah. It’s not the baseballs, guys. It’s the friggin’ bats. It’s not really a “head on a swivel” type situation when you have a wooden dagger helicoptering toward your face. They’re much more difficult to get out of the way of than a baseball, being that they don’t follow a direct path like a baseball would, and they’re also far more dangerous if they actually do reach you and hit you.

It’s really a maple bat versus an ash bat issue. Bats are going to break. That’s just part of the game. You can’t stop that. But baseball players are creatures of habit, and if they prefer a certain bat, they’re going to use it until they legally cannot. With ash bats, you can audibly hear the bat break, but more often than not, the bat will stay together. When maple bats break, that’s when you have stories like this of sharp pieces of wood flying into the stands or at players on the field.

Last summer, a woman was struck with a bat at Fenway Park and nearly lost her life. Luckily, she survived. And also luckily, it didn’t take somebody getting killed in order for MLB to make the suggestion to teams to extend their nets, which the Red Sox were obviously happy to oblige.

People will complain, but that’s because people hate change. After a year or two, fans who have season tickets behind the newly netted areas won’t even remember what it was like to watch a game without them there. Not only that, but I’ve watched plenty of Red Sox games from the grandstands behind home plate, and I’m a picky son of a bitch when it comes to my baseball-viewing experience, and I’ve never once been like, “I can’t watch the game with these nets here.” I don’t even notice the nets. I’d much rather have a net in front of my face that I don’t even notice than have to dislodge a bat shard from my face. Seems like a fair tradeoff to me.