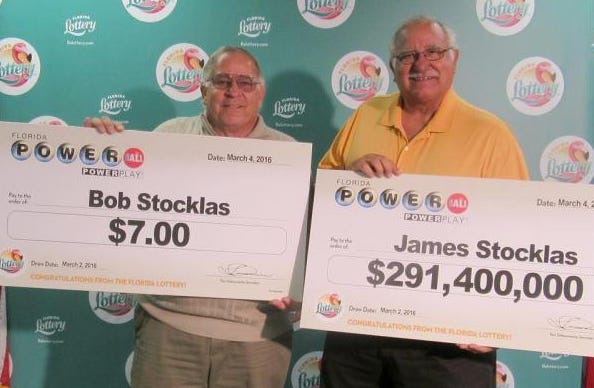 Upi - They say families that eat together, stay together. But what about families that play the lottery together? Last week, a pair of brothers decided to buy lottery tickets on their way from the Sunshine State back to Pennsylvania, having spent several weeks fishing in the Florida Keys. It turned out to be a wise decision. Both tickets hit, but not all winners are created equal. James Stocklas, of Bethlehem, Penn., won Florida’s $291 million Powerball, while his brother Bob scored $7. “I occasionally play the lottery back home and when I’m in Florida,” Stocklas said in a statement released by the Florida Lottery. Stocklas, a senior judge, didn’t realize his luck until Wednesday while having breakfast at the diner he visits nearly every morning. “I got my Powerball ticket out of my wallet to check the numbers, and sure enough, I was the jackpot winner!” the 67-year-old said.

Perfect. Shouts to the Powerball for giving Bob the big check, Happy Gilmore style. $7 winner, woop woop! Meanwhile James is swinging his big brother dick all over him with that 291 million dollar score. The cool thing about them is they are two old farts about to BALL OUT. They are going to be going on every single Caribbean cruise until they keel over and die. Bob is going to be cleaning up James’ sloppy seconds like there’s no tomorrow. How do I buy stock in Tommy Bahama shirts? Who makes those? (Apparently Oxford Industries makes them and the stock is on the up n up)

So shout out to Bob and James, about to live the god damn dream. Or at least James will. What if he still holds a grudge from when they were kids and he’s been waiting 60 years to get revenge? My brother pushed me down the stairs when I was like 7 (could explain a lot if we’re being honest), I got in trouble for it somehow, and I’ve never forgiven him. Can’t wait til I win the lottery, then he’ll see who gets the last laugh.