And that right there, is why I love Hulk Hogan. He spent the majority of today telling his story of how he became a professional wrestler, up and through the sex tape where his former best friend Bubba the Love Sponge secretly filmed him having sex with his wife and Gawker published the tape. To clarify, Bubba taped Hulk having sex with Bubba’s wife, not Hulk’s wife. I watched the whole thing online today, and allow me to catch you up on what you might have missed.

The first half was Hogan explaining the wrestling business to the jury (relive jury selection here). He explained what a heel was, what a face was, how he got his start, how the outcomes are predetermined (shocking, I know!), and much more. I don’t know if it’s normal to have people tell their entire autobiography, but I certainly enjoyed it, as did Hogan: 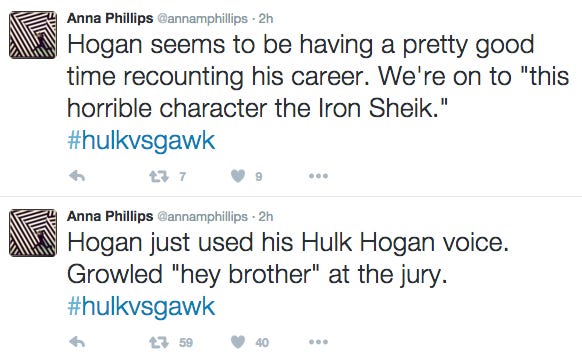 Hogan then explained the Hulk Hogan character and confirmed that he’s always in character.

He also confirmed why he always wears a bandana, even in court. It’s because he’s balding and has a huge head. I feel ya, brotha. I feel ya all too well.

Another great moment was when Hogan was talking about doing promotion for TNA Wrestling. The lawyer had a couple questions about that

The Gawker lawyer just took the stand and I want to kill him already. He’s your classic, straight out of the movies Hollywood lawyer with his slow, conniving voice. So smarmy. Seriously I hope they give Hogan 200 billion dollars just because Gawker brought out this lawyer. He’s everything everyone hates about Gawker x 10000000 for being a lawyer. #TEAMHOGANBROTHA