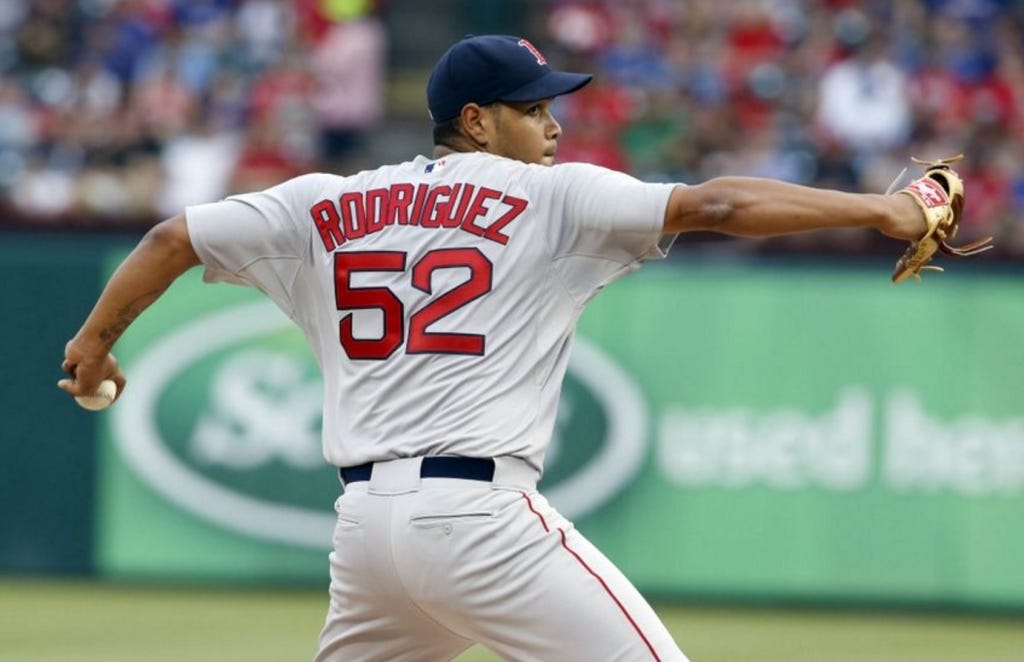 About a week ago, Red Sox left-hander Eduardo Rodriguez injured his right knee when he was shagging flies with other Red Sox pitchers in the outfield.

The Red Sox shut him down, sent him to get an MRI, which revealed no structural damage. However, he was diagnosed with a subluxation of the patella tendon, whatever that means. To my understanding, there’s fluid in the knee and some swelling. I felt like the Red Sox were downplaying the injury, only because they could. They really didn’t have to rush to make a decision about whether a disabled list trip would be necessary, and according to manager John Farrell, they don’t have to decide for another ten days. Farrell said that Rodriguez is slated to make his first spring training start some time around March 17 against the Orioles.

If Rodriguez is unable to make that start, then it’s likely that he won’t be ready in time for Opening Day, and a stint on the disabled list could be in his future. As ESPN’s Scott Lauber points out, once the swelling goes down, it’s unlikely that he’ll immediately jump into game action and will need a few bullpen sessions to see how the knee feels while throwing off a mound. The delay in his preparation for the season isn’t the worst thing to happen for him or the Red Sox, though.

WEEI’s Mike Mutnansky said on the air last week that he’s heard that the Red Sox don’t want Rodriguez logging 200 innings this season. Rodriguez threw 170 innings last year between Pawtucket and Boston, and although I’d assume that they want to stretch him to somewhere around 180 innings this year, they’d prefer to keep it under 200 innings, and a DL stint early on could help, versus having to skip a start or two later in the year. That’s not exactly a favorable scenario, especially if he’s rolling this summer like he was in 2015 before his pitch-tipping became an issue. By the way, he’s fixed his problem of tipping pitches.

As of right now, Rodriguez is slated to be Boston’s fourth starter, although many would argue that he should be second behind David Price. If Rodriguez is to miss any amount of time, the Red Sox are fortunate enough that they wouldn’t have to scramble to find a replacement on the free agent market or via trade. If it’s going to be a short term issue, Steven Wright is a name that comes to mind as a replacement, who will benefit from the fact that he is out of options. Henry Owens is obviously the more suitable replacement, but the fact that he has three options remaining on his contract could rob him of an opportunity to step in during Rodriguez’s absence.

However, if Rodriguez has to miss significant time, I wonder if the Red Sox just go with the better option in Owens, who pitched well in his eleven starts after getting called up last season. Owens allowed seven earned runs in three of those eleven starts, so it kind of skewed his overall numbers, but he allowed three earned runs or less in seven of those eleven starts, six of which were one earned run or less. So if Rodriguez has to miss any amount of time, the Red Sox are in good hands for the time being, assuming that Owens is the guy, and he continues to be the pitcher that Red Sox fans got the chance to see in limited time last season.