Ayesha Curry has to be the secret to the Steph’s success, right? I mean they are already the NBA’s First Family, with Mama Curry still the Queen of the whole league. Ludacris said you want a lady in the streets but a freak in the bed.  But I think in 2016 we have to include “a fighter on social media to block out the haters”.  Ayesha takes care of the stuff at home and the haters on Twitter while you keep shooting a billion jump shots and become the greatest shooter of all-time.  Because getting into it with Lakers Twitter is the closest thing to FSU Twitter that you will see in the NBA.

Just no chill as far as the eye can see. So bravo for Ayesha for taking on the #h8erz. Having the most beautiful woman on the planet as your mother in law cannot be easy.

As for yesterday’s abomination of a game…

Jesus Christ, nobody could have seen that coming.  Unless you went with the old equation of Historically Great Team That Has Become Rock Stars + Big City With Tons Of Places To Ummm Have Fun + Game Against Shitty Team = Surprising Loss still checks out.

That wasn’t a good 90s Knicks team either. It was Jeff Van Gundy’s second game ever as head coach after Don Nelson got fired as New York was getting ready to clear cap room for that summer’s free agency bonanza (which ended up with Chris Childs and Allan Houston in New York). But the highlight of that game (other than beating the Bulls) was Patrick Ewing dunking over Dennis Rodman. Sure it was a travel, the “Simply The Best” music is a little much, and I thought I had just watched Ewing die on live TV. But this was truly the best moment of that entire season.

Anyway, back to yesterday’s game. You have to keep in mind that the Lakers did all this with Washed Up Kobe being a game-time decision with scar tissue in his shoulder acting up.

When it was all said and done, this was my least favorite NBA game of the entire season. And that includes every bullshit Knicks game coached by Derek Fisher and Kurt Rambis I have had to endure. This Warriors team is all NBA fans like myself have for the rest of the season. And yesterday was like a massive overcorrection by the basketball gods for Steph Curry and the Warriors on the level of Elaine drawing Uncle Leo a new pair of eyebrows. 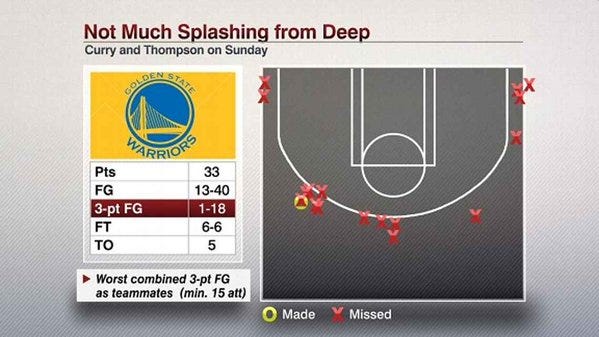 So now, even if the Warriors go 73-9 and win the championship, we have to stick them with an asterisk that says they lost to a Lakers team coached by Byron Scott, right? That’s worse than having a few extra games to hit some home runs like Maris is 1961 or any of the steroids records of the 1990s-2000s

At the end of the day, at least Larry Nance gave us a good memory from the game (even if it didn’t count).

So now we are probably one more bad Warriors loss away from the rumors about which teammate is sleeping with which teammate’s wife. And I will pistol whip anyone that even thinks of mentioning Sonya Curry’s name in the ilk of a Gloria-Delonte relationship.