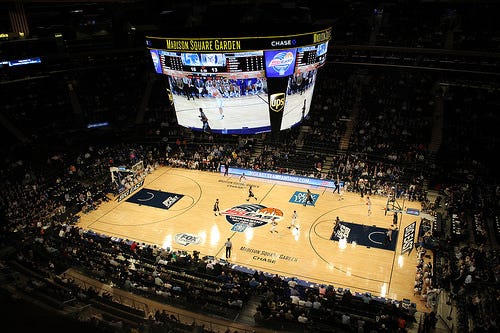 Championship week is upon us. It’s starting to become one of the better known secrets that conference tournament week is actually more entertaining than the NCAA Tournament and the week to go to Vegas if you want to avoid a massive crowd.

We’ve already seen some of the madness with Wichita State losing to Northern Iowa, only for Northern Iowa to go ahead and win the Missouri Valley Conference on a stepback jumper by Wes Washpun, which bounced about 18 feet in the air off the back rim.

So we’ll spend the next couple of days breaking down the major conference tournaments and what to keep an eye out for as we’re less than a week until Selection Sunday. Friendly reminder to get your pools e-mails out and color up with your bookie so you can reload for the next month. 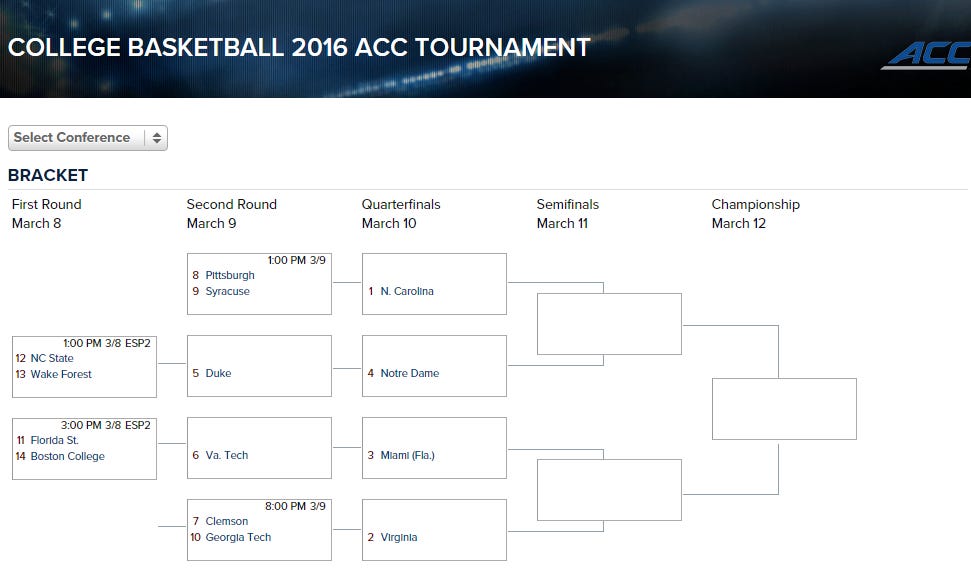 1st Round Upset Likely: No. 11 Florida State over No. 6 Virginia Tech

Quarterfinals: UNC over Syracuse, Duke over Notre Dame, Virginia over Clemson and Miami over FSU

Preview: The ACC Tournament is the most respected conference tournament because of the conference name and how the ACC takes more pride in its tournament title than the regular season. My pick to win this is Virginia thanks to the draw. The top half of the bracket is loaded with UNC as the No. 1 and then Notre Dame and Duke as the No. 4/5 seed respectively. Virginia as the No. 2 only truly has to worry about Miami to challenge them until the ACC Championship game. The Cavaliers will get Clemson/Georgia Tech in the quarterfinals and getting both of those teams away from home makes it that much easier of a win. With the tournament being played in Washington D.C. look for a major home crowd for Virginia as well. The obvious storyline here is Louisville being ineligible for the postseason, which would have had them as the No. 4 seed, loading up the top half of the bracket even more and would have dropped Duke to the No. 6 seed. The first round matchup worth watching is Pitt/Syracuse in the 8/9 game as that could be a play-in game for the NCAA Tournament and/or avoiding Dayton in the NCAA Tournament. UNC/Virginia/Miami are still all in contention for a No. 1 seed in the NCAA Tournament, which is something to keep an eye on during the ACC Tournament. 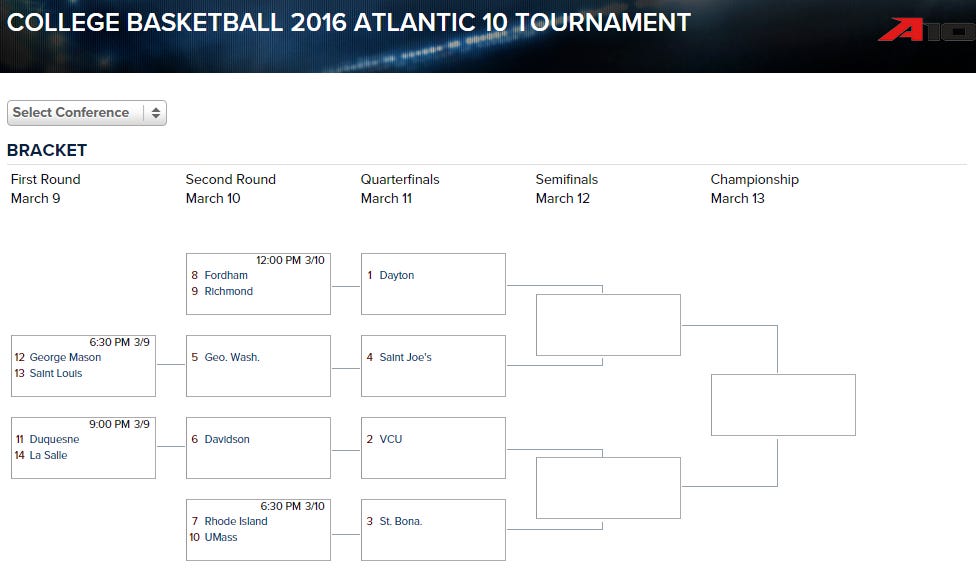 Semifinals: Dayton over St. Joe’s and VCU over Davidson

Preview: I’m beyond giddy for the A-10 Tournament held at the Barclay’s Center in Brooklyn. Dayton looked like the clear cut best team in the beginning of February before Kendall Pollard got injured and they fell back to Earth quite a bit. However, they ended the season with a home victory over VCU giving them the No. 1 seed and setting up what could be one of the best semifinals with the Flyers going against St. Joe’s. The bottom half of the bracket could get wild with Davidson as a No. 6 seed. Despite being the No. 6 seed, Davidson does have nice wins on the year, beating George Washington to close the season. The former Steph Curry’s have one of the best offenses in the country and the quarterfinals game against St. Bonaventure can score with anyone. If you like high-scoring games you’re going to want to watch that. VCU could stumble against Davidson, especially if Jack Gibbs gets hot from deep, but VCU’s defense should win them that game. The finals will be one to watch as the two teams just played a one-point overtime game at Dayton to end the A-10 season. 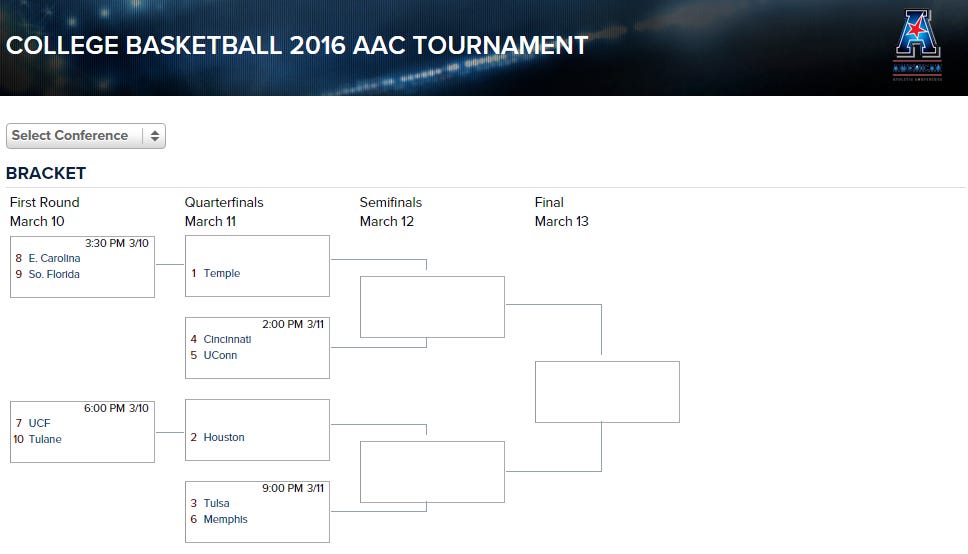 Quarterfinals: Temple over ECU, Cincinnati over UConn, Houston over UCF, Tulsa over Memphis

Preview: I’m not going to lie, this tournament isn’t the most exciting with SMU being out of the picture. In fact they really should move this tournament from Orlando to Dayton so half the teams are ready for their play-in games for the NCAA Tournament. The game that obviously sticks out is UConn/Cincinnati in the No. 4/5 game, which could eliminate one of the teams from the NCAA Tournament. On the flip side whoever wins that game will be the likely favorite to win the American Tournament. The biggest key for Cincinnati is if they finally decide they want to score. They have the 6th best defense per KenPom and have the season sweep over UConn by a combined six points. Cincinnati has struggled in a lot of close games, losing six games by less than four points so far this year. The obvious focus will be on that top half of the bracket, but the bottom half features two interesting teams in Houston/Tulsa (quick how many actually knew they were the No. 2/3 seeds?). Tulsa is more likely to get an at-large bid than Houston, but the Cougars have won three in a row including games over UConn and Cinci. Every single team that doesn’t win the American Tournament will be on the bubble, so this could be one of the more competitive tournaments. 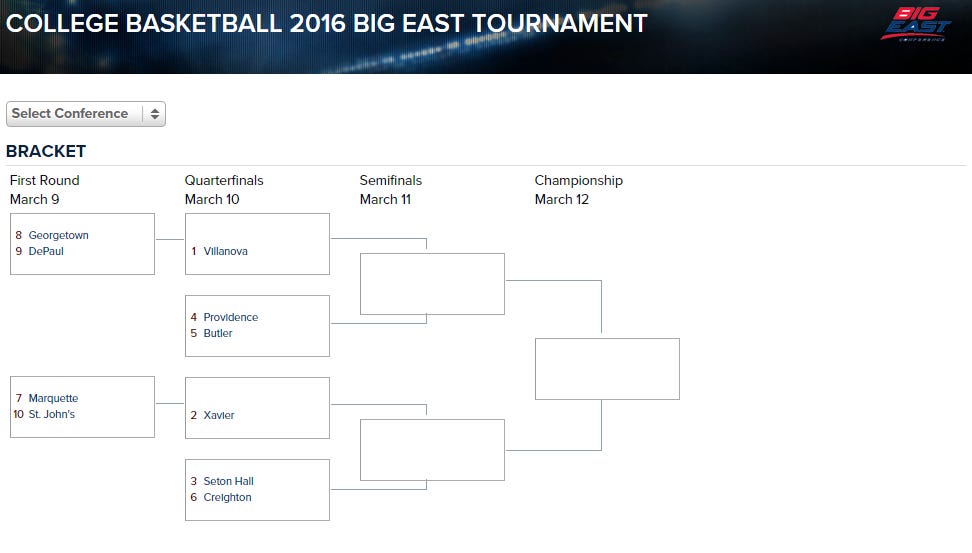 Preview: A lot of chalk in my preview for the Big East, but it wouldn’t shock me if Villanova or Xavier don’t make the finals. Providence has played Villanova tough twice – including a win in downtown Philly – while Seton Hall has Isaiah Whitehead, who is the best player people don’t talk about. The biggest advantage for Xavier though is their depth. Chris Mack plays 10 deep and playing 3 games in 3 days that will show as he can try to rest his best players as much as possible. Providence/Butler is obviously the quarterfinal game most will want to watch as they are trying to secure a better seed in the NCAA Tournament and Butler is trying to avoid the play-in game. However, the No. 3/6 game between Seton Hall/Creighton will be intriguing to watch as Maurice Watson for Creighton can pull a Bryce Cotton and lead his team to a surprise NCAA Tournament berth. Yeah, I know it isn’t the old Big East, but this is still the Big East Tournament at Madison Square Garden and is a must-watch.

Podcast with Brad Redford: I sat down with former Xavier player Brad Redford to talk about his time at Xavier. We discussed one of the best NCAA Tournament games when Xavier went against Kansas State in the Sweet 16 and how he beat Draymond Green for Mr. Basketball in Michigan. Check it out here: