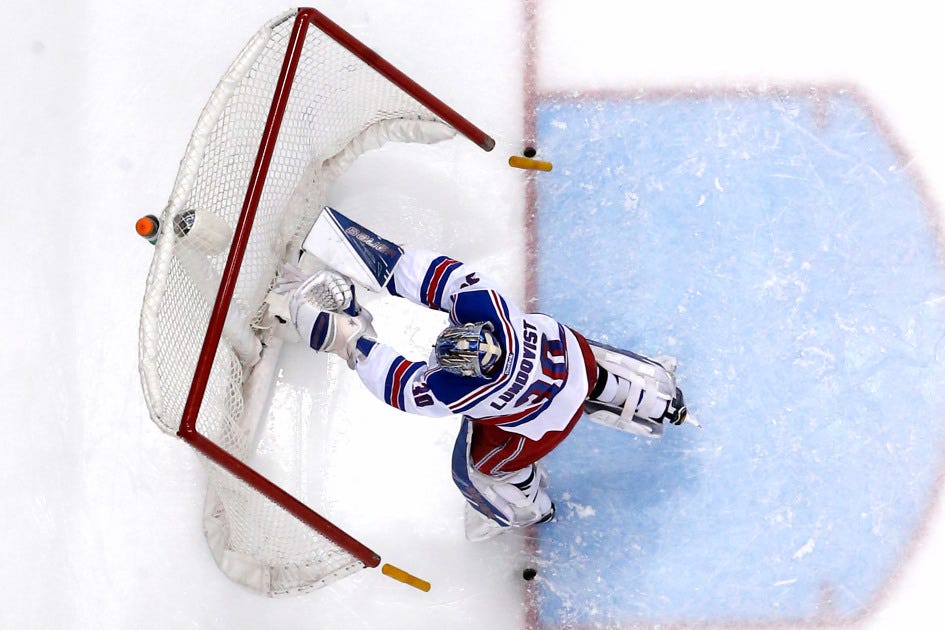 Despite 4 periods & almost 72 hours off since Thursday night’s net flip, Henrik Lundqvist’s neck spasms aren’t over with in time for a Sunday tilt against the rival Islanders at MSG. It’s a little surprising, but as long as NY is simply erring on the side of caution, keeping him fresh isn’t the worst thing in the world. After today, the Rangers have only a trip to Buffalo until Saturday. Raanta’s been solid his past three starts & it’s possible Hank won’t see game action before next weekend.
There’s still a month of regular season to go but it’s a safe bet to say that this is gonna be a first-round playoff preview. The Blueshirts are 8 points ahead of the 4th place Pens while the Isles are 3 up with two games in hand. Alternating wins & losses like they’ve been doing for a while now isn’t gonna help Pitt climb any higher than a wild card invite.
What a fucking week or so of hockey that’ll be. As much as I’d love to be wrong, it’s not gonna be a repeat of the 1994 conference quarters where the Rangers swept by a comical 22-3 total score to kickstart their last championship. It’ll be a war. I don’t think you could ask for these two NY franchises to be in better spots for a playoff series. The Rangers, although Cupless, have been Eastern powerhouses over the past few seasons. Meanwhile their little brother Islanders haven’t gotten out of the first round yet, but have been improving & gained valuable post-season experience in two of the last three years.
If the Isles are gonna break their streak of 8 straight series losses dating back to the 1993 Conference Final (divisions have been renamed TWICE since the last time they advanced), there’s no better opponent to beat than the Blueshirts. For the Rangers, perhaps sending the Islanders packing will rekindle some of that ’94 Cup magic.
Not that the rivalry ever needed anything on the line for regular season matchups to matter. Today’s tilt would’ve been a battle nonetheless, except now it feels like a dress rehearsal for mid-April mayhem. The Rangers want home ice for that carnage regardless of how much their fans would dominate Barclays, so a W would certainly help. Plus, you don’t wanna lose momentum after a solid win in Washington on the back of Antti Raanta with 5 of 6 upcoming games away from home. AV’s offense is long overdue for a breakout. Maybe the travel-weary Islanders are just what they need. LET’S GO!!