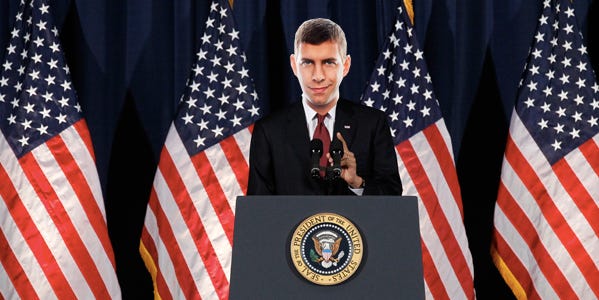 The @Celtics pulled out the last second win over the Knicks…Here’s what @Isaiah_Thomas had to say after the win. https://t.co/glLoqkwxFt

How delusional am I? When I first heard Isaiah start talking, I felt this was him giving a subtle h/t to a certain blogger. You cannot convince me otherwse. The “never quit” movement basically started at Barstool Sports, you know it, I know it, Isaiah knows it. Isaiah if you’re reading this (which I’m sure you are as you kill time in that shithole they call Cleveland) first off I love you. Second, you are a gawd. What we are seeing is something special. There’s no other way to describe it. Five games in a row overall, 13 in a row at home. It has been a LONG time since something like this has happened for the Celts.

Obviously the wins are nice, but it’s HOW the Celtics are winning is what gives me such a raging Scalabrine. I think my favorite part about this team and the success they are having is it’s basically left all the “pundits’ in a panic looking for something to gripe about. Or if you are more a visual learner, sort of like this

For a team with nothing but role players, who’s best player wouldn’t be more than a 6th man on a title team, please explain this to me. I’ll wait.

Those are only some of the best teams in the whole fucking league nbd. But just like myself and Isaiah say, this team doesn’t know HOW to quit. It starts at the top of the pyramid and trickles all the way down to the last player on the bench. Boy Wonder Brad Stevens might as well be Bill Belichick in how he just shows no emotion. He doesn’t get too high when good things happen, and he doesn’t panic when things shit the bed. It’s incredible. We heard a lot over the last few weeks how it’s a bad thing if your coach is your main attraction, and I couldn’t disagree more.

Look at all the dumbass coaches in this league, why wouldn’t you want to play for Stevens? Over the course of this streak there have been many factors that contribute to their success, but I honestly think the discussion needs to start with Brad. He’s been incredible, and all bullshit aside, should be a serious COY candidate. I mean almost nobody aside from those who come to this blog saw this coming.

Also something to consider. With the TD Garden turning into the third toughest place to play in the league (that’s not hyperbole, look it up!) I cannot wait until the playoffs. See, they’ll have home court in the first round, and most importantly, won’t be playing Lebron. Now I don’t want to get too ahead of myself, they need to actually win a fucking game first, but I’m on a Celtics high right now so I care not for those semantics. Give me any team in the East right now. That’s right, ANY.

Things are about to get real steamy around these parts, please act accordingly.

– Because he’s #justaguy, I’m giving the first billing to Jae. Now he wasn’t perfect, he struggled from both the three point line and the FT line, but we got a vintage Jae performance. Can he have vintage performances yet? Whatever. His 34 minutes were second only to Isaiah, and all things considered, I liked the way he defended Melo. Sure he scored 30, but it took him 27 shots and he was just 2-8 from deep. That’s the Crowder effect. Sure you may score on him, but he makes you work for it. We’ve seen it from him in the past, and we’ll see it again from him in the future.

For a guy who can’t score, he’s somehow managed to get over 20 four times in his last six games. Remember, players like Paul George, Jimmy Butler, Kawhi Leonard played themselves into the type of players they are today, and while I’m NOT saying Crowder is at that level right this second, I DON’T think it’s a stretch to say that if he continues to develop at this rate, why can’t that be his ceiling? He’s just 25 after all.

– I honestly cannot remember a night where we saw so many beautiful outlet passes. I mean absolute bombs.

Evan Turner was the @HRBlock Clutch Player of the Game in last night’s win. This hustle play is just one reason why.https://t.co/17mALKbvR9

– Look, I am man enough to acknowledge when someone turns around their season, even if at times he makes me want to kill myself. Evan Turner’s resurgence is a huge part of this teams success. Without him, we aren’t as good, I can’t fight that anymore. Last night, aside from Isaiah, he was our best player. In fact, this was his best game of the entire season. I’ve talked about it before, but it’s easy to see why he’s having this level of success. Look at where he is scoring from 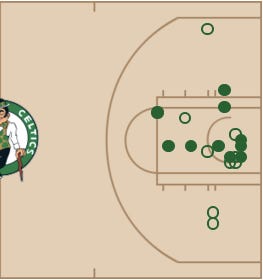 This is why I chose to ignore his tough night against POR, because if he can consistently live in this area good things are going to continue to happen. When he pulled up for his go ahead jumper with 36 seconds left, it was the exact shot I wanted. He’s automatic from 15 ft, and while it’ll be interesting to see how he responds once the playoffs come around and teams actually play defense, this is about as valuable a weapon as a team can have.

Oh, and this is not a coincidence: Turner played well, the Celtics won. Do with that what you will.

– Listen, I don’t want to come off as cocky or anything, but I’m right about Isaiah Thomas. Following up his 30 pint performance against POR where he completely outplayed Dame, he backed it up with a 32 point performance on 15 shots while completely outplaying Melo, who you know, is a star. This is just getting ridiculous that people refuse to give him proper credit. I’ve seen everything from 6th man on a title team, to maybe a 3rd best player on a title team. It’s all bullshit. You CAN build a team around Isaiah. If there was another player in the league who was putting up these type of performances we wouldn’t even be having this discussion. For some reason people can’t get past his height, and then they try and tell you it’s not just his height, but how he plays that’s the issue. When I hear this, I know they aren’t watching what actually happens, and are going off weak takes.

Guys like Mike Gorman and myself get a lot of flack because of our stance on Isaiah, and how neither of us would trade him for a guy like Kyrie Irving. It’s the truth. Use his numbers, or the eye test, basically any measure of production you want, the tape don’t lie. Isaiah Thomas is a top PG in this league whether you finally want to believe it or not. I will fight this to the death.

Last night we saw why: 9-15 shooting 32 points 3 rebounds 8 assists 2 steals and ZERO turnovers. Now look, Jose Calderon has never played defense in his life, so this was to be expected, but in NO way does that discredit what we saw.

Isaiah can finish in traffic

and because he is so lethal when it comes to transition threes, it enables him to make plays like this

IT launches from deep! Or at least he wanted the Knicks to think so: pic.twitter.com/XDbIOZcn5D

- Another solid effort from Sully, both from the field and on the glass. Believe it or not, he actually led all starters with a +12.

– Throw it down big man!

- The game winner. One of Brad’s finest moments, even the Knicks admitted they didn’t see it coming. God I love Brad Stevens. ATO genius like you read about. Oh, and Avery got fouled too.

– On the very next possession, I loved how Jae defended Melo. With a foul to give Jae timed it up perfectly to when he gave that foul with 3.3 seconds left. Melo has a knack for hitting these tough shots, as we saw about 20 seconds earlier, but it worked to perfection. Once they inbounded the ball, it pushed the Knicks wayyyy out, and the rest is history

Without Crowder’s presence of mind to foul when he did, who knows what happens.

– Fourth game in a row the Celts come back from double digits and win. If we’re being honest, I’m starting to scare myself

4th straight game comin back from double digits no biggy

– Let’s not get ahead of ourselves, this game wasn’t all butterflies and gum balls. Celts dug themselves in another early hole, and in my mind it’s because early they settled. Going 4-20 from three pretty much sums that up. In fact to make matters worse, the Celts had a really tough time defending the three point line, which was the only reason NY was able to lead for most of this game. This is becoming a bit of a trend and I’d be lying if it didn’t scare me.

– Overall, their defense can be much better. They are still allowing teams to shoot too well in their building, and are giving up like 55+ points a half. Let’s just say it’s a good thing they are the highest scoring team in the East becasue their defense is struggling.

– I really hated how in the last 3 or so minutes the Celts refused to take it to the basket. It was long jumper after long jumper. Made no sense to me given how poor the Knicks defense is.

– This means you Jonas, terrible decision on that late three.

– The foul and tech on Marcus. Not even sure what he did, but he needs to learn to keep to himself. NBA refs are sensitive.

– I feel like I’m doing a disservice but I’m not putting anything here for the second blog in a row. Perform like this, you get a hall pass.

A 5-0 homestand is something I think we all hoped for, but weren’t totally confident they’d achieve. Well, once again the Celts continue to prove everyone wrong. We now begin maybe the toughest stretch of their schedule and you can’t ask for the team to be playing any better. If they win tonight in CLE (again), holy shit. Most likely the law of averages will rear it’s ugly head sooner or later, but what if it doesn’t?