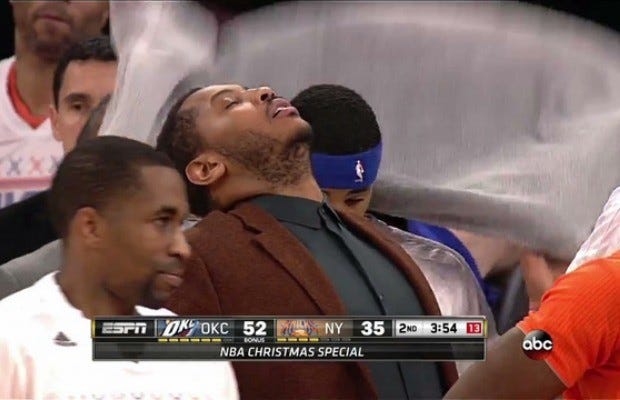 ESPN- A frustrated Carmelo Anthony said that it has been difficult to deal with a “rough patch” with the New York Knicks over the past three seasons while peers like LeBron James and Chris Paul have enjoyed success.  “I don’t think envy is kind of the right word,” Anthony told reporters in Boston on Friday after the Knicks’ shootaround. “I do look at my peers and say: ‘Damn, what am I doing wrong? I should be there.’ There was one point in time where they were looking at me like that. Made [the playoffs] 10, 11 years straight. Right now it’s kind of a rough patch for me. I’m trying to figure out a way to get out of it.”

The Knicks have missed the playoffs for the past two years and, barring a drastic turnaround, will miss the playoffs for a third straight season.  Anthony, 31, said that the losing, particularly this season, has been difficult to handle. The 13-year veteran made the playoffs in his first 10 seasons in the NBA.  “It’s been trying. For me to remain the same, remain positive throughout this whole situation, it’s definitely challenging from that standpoint,” Anthony said. “It is a test to me to see if I could get through this and stay strong throughout this situation, this whole process. So it has been challenging from that standpoint. “

Hey #Me7o, get in line pal.  You see the millions of sad sacks of shit wearing some sort of Knicks clothing and a giant frown on their face?  Those are Knicks fans.  That rough patch you complain about has been going on for us more than a decade now.  It goes back to the Frederic Weis pick, through the Isiah/Starbury/Larry Brown fiascos, and right to today.     We look back fondly on the days of Michael Jordan or Reggie Miller ripping our guts out, because at least we felt happiness before the pain.  So excuse us if we don’t feel sorry that you are unhappy being in a place that you requested a trade to.  Who asks to have James Dolan as their boss anyway?  That is some “selling your soul to the devil” type shit.  And you know why LeBron and CP3 make the playoffs?  Because they are better than you.  So please just try to stay quiet, #StayMe7o, and hopefully The Zen Master will end this miserable marriage over the summer.

Just another day in paradise.