Is he mad? Of course he’s fucking mad. Lundqvist has a one-track mind, and the only thing that matters is getting a Stanley Cup. He doesn’t care about being named to Team Sweden. Doesn’t give a shit about his birthday Wednesday. There’s been plenty of games where he’s stood on his head to keep his team in it only to watch his heroic efforts go to waste. Surprisingly he’s kept his composure for years in those instances. But this is the second time in as many years that Ryan McDonagh has tried to murder him.

I’ve never seen a captain hate his own team so much. Between crushing Hank’s throat, caving Zucc’s skull and last night’s attempted RKO we might need to have McDonagh kidnapped & tortured into telling us who he’s working for. Anyway, winning a Stanley Cup is hard to do without a head so I get Lundqvist’s frustration. The refs didn’t want to give him a stoppage so he made one happen. Big deal. Personally, I love it. Call it a temper tantrum. Call it “baby stuff” like Fleury felt the need to do post-game. If the most important component to ending a Rangers Cup drought felt a delay of game minor was worth the whistle then do what you gotta do. I’m just shocked he didn’t snap again after a bad bounce, sweet Girardi skate feed to Malkin’s tape & a Yandle penalty led to three Penguins goals in less than two minutes. The first goal wasn’t Girardi’s fault but if I’m Hank & saw this after friendly boards hooked Crosby up… 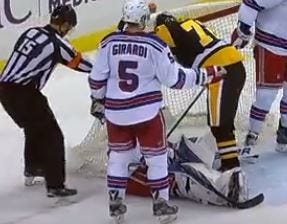 …I might’ve murdered #5 before he was able to notch the primary on Malkin’s finish 20 seconds later. No one has the right to a “what the fuck?” pose less than Dan Girardi.
Even though Lundqvist finished the second period he didn’t come out for the third & won’t even be on the bench tonight in Washington due to neck spasms. The Blueshirts made an emergency call-up of Magnus Hellberg to serve as Raanta’s backup in what I assume is just a precautionary move. Not exactly the ideal start to the Rangers’ mini Metro playoff preview losing 2 points in 2 minutes while Hank loses his composure. It’ll be interesting to see how this team responds against the NHL’s best team, but it might be a good time for the offense to bring a little more to the table than the 11 goals they’ve put up over the last 6 games. Three of those have come from defensemen, three from Kreider & two from 4th liners. Time to wake the fuck up, I don’t care how nice Holtby’s trying to be.

As for the Penguins & their Lundqvist jabs: