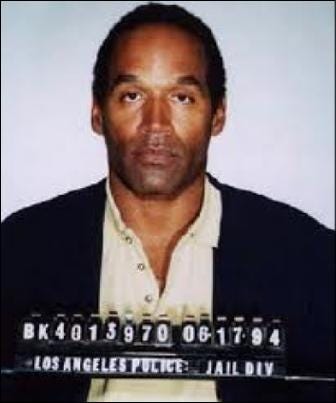 TMZ- A construction worker found a knife buried on the perimeter of the former OJ Simpson estate … and it’s currently being tested by the LAPD in a top secret investigation … law enforcement sources tell TMZ.  The story is incredible. We’re told a construction worker found the knife years ago — we have heard several different stories, ranging from “several years ago” to 1998, when the house was demolished.  The weapon is a folding buck knife.

Our law enforcement sources say the construction worker took the knife to the street, where he saw an LAPD cop. He told the officer where he found the knife and the cop took it. Turns out the cop — who worked in the traffic division — was off duty at the time, working security for a movie shoot at a house across the street on Rockingham. Our sources say the officer took the knife home and kept it … kept it for years. In late January of this year, after the cop retired from the LAPD, he contacted a friend who worked in LAPD’s Robbery Homicide Division (RHD). The cop told the friend about the knife and said he was getting it framed to put on his wall. He wanted his friend to get the DR (Departmental Record) number for the Nicole Brown Simpson/Ronald Goldman murder case, which he planned on engraving in the frame.  We’re told the friend was indignant, and told his superiors. The brass was outraged and demanded that the retired cop turn the knife over, which he did. Our sources say the knife is currently being tested for hair and fingerprints. It will be moved to the Serology Unit next week, where it will be tested for DNA and other biological evidence.

One source familiar with the investigation tells us, cops who eyeballed the knife think it could have blood residue on it, but it’s hard to know without testing because it’s extremely rusted and stained.  The investigation is top secret. It’s been logged into the LAPD’s computer system outside the official case file to maintain security. Our sources say, since OJ was found not guilty, it’s still an open case. That means cops can continue investigating, but OJ cannot be prosecuted again — double jeopardy.

Hey you guys, I’m starting to think O.J. may have actually committed those murders. I mean I always believed that, since like every shred of evidence I have seen dating back to 1994 has pointed directly at Orenthal Jame Simpson. But to be fair to Uncle Juice, the whole Mark Fuhrman thing + O.J.’s defense team + the prosecution was a get out of jail card.  I mean O.J. could have had a bloody knife is his hand from the Bronco chase all the way to the verdict and he still would have somehow gotten off.

When I watch The People v. O.J. Simpson, Marcia Clark seems like more of a murderer than O.J. Just crushing cigarettes and giving icy cold glares. When you add in the L.A.P.D. having an officer finding a knife buried at O.J SIMPSON’S FUCKING ESTATE years ago and not thinking of telling anyone but instead tried to turn it into something Steiner Sports would sell, it all makes sense.  This story has also driven the point home that the Biggie murder is never getting solved.  If they couldn’t solve the murders of Nicole Brown Simpson and Ronald Goldman, Christopher Wallace’s killer will never be brought to justice.  The only way holding onto that knife actually makes sense is if this guy was just biding his time and waiting to reveal he had the knife when it would sell for the highest price thanks to an O.J. Simpson TV show.  Just waiting for the perfect time to strike, like Lois Einhorn executing her kidnapping of Snowflake and Dan Marino during Super Bowl week.  Or this.

And Johnnie Cochran must have been laughing his ass off at this case when he was alive. Dude was pure electricity and knew how to work a crowd.  Having him face a bumbling prosecution was like using lighter fluid to light a charcoal grill.  I would rather face Steph Curry in a shooting contest than have faced Johnnie in the courtroom when he was alive. Hell, I wouldn’t want to face him now and he’s been dead for years.  Because this guy was unbeatable on the court.

and off of it.  A silk robe AND silk jammies?  Have mercy, Johnathan!