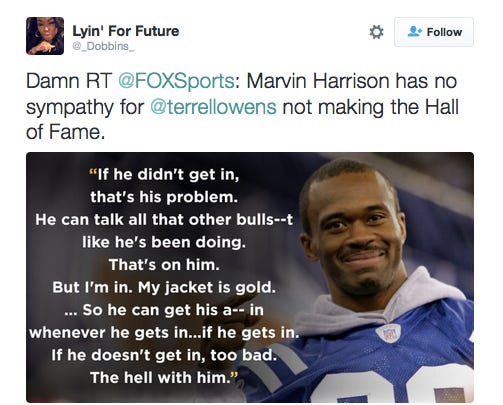 Terrell Owens is 100% in the right here. He mentioned how Harrison’s off-filed issues (you know, getting someone dead) were ignored in his Hall of Fame voting while TO’s off-field issues (being kind of a dick and a prima donna) played a huge factor in keeping him out of the Hall, as Peter King himself admitted. That’s just a fact. Harrison kept his head down and never said shit, TO never shut the fuck up. The thinking is very backwards because while TO’s antics may have been a pain in the ass, they certainly made the media’s job easier.

But even though that’s all true, you don’t fucking say it. You don’t troll Marvin Harrison for playing a part in getting someone killed. TO’s a famed button-pusher but some are best left unpressed. You don’t spit in the wind, you don’t tug on Superman’s caps, and you don’t make fun of Marvin Harrison about gun play. Would you tweet at Ray Lewis about white suits and knives? Hell no. Keep that shit behind closed doors because you can’t unring that bell. Head on a swivel when you’re at the car wash from here until eternity, TO.