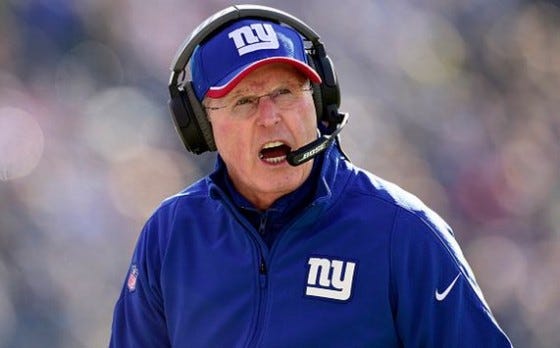 Daily News- On Michael Kay’s ESPN radio show this week, Coughlin said, “Don’t think that there aren’t some hard feelings there. There certainly are. That’s just natural. But I try to control them when the moment is right.” Apparently, the moment was not right when he interviewed with the Eagles one week after he left the Giants. Even though the Coughlin camp put a spin on the interview with the Philly higher-ups by saying Coughlin withdrew from consideration because he couldn’t bring the core of his staff with him after McAdoo was promoted to replace him and retained much of his crew, others have since said Coughlin was not going to be offered the job.

Why? The interview was a disaster. Coughlin acted like a 20-year old whose girlfriend had dumped him and he was trying to make her jealous by dating her No. 1 enemy on the rebound. NFL sources say his hard feelings for the Giants came through loud and clear in the interview with the Eagles brain trust, which included owner Jeffrey Lurie, and he was obsessed with how he felt wronged by the Giants. He was not forthcoming about his plans for his staff. He came off more concerned with making the Giants look bad than being consumed with coaching the Eagles.

I want to be upset with Tom on this one, but I can’t. We’ve all had our heart broken before and he is no different. It couldn’t have been easy to see the franchise that you led to two Super Bowls (and another as an assistant) cut ties with you while keeping the GM that gave you a struggling roster. And regardless of how he is as a coach, seeing a funny looking guy like Ben McAdoo replace you as head coach had to be tough. So while I hate that Tom went all the way down to Philly to talk shit about the Giants, I understand it. They probably get off on the hate down there.  I feel like the pink slime from Ghostbusters 2 that is fueled by hate actually flows underneath Philadelphia.

In fact, I bet the Eagles execs asked Coughlin to throw darts at a dartboard with John Mara’s face on it and wipe his ass with a Giants towel. If that’s what was needed to make General Coughlin feel better, that’s fine. But it has to stop here. It’s like Sonny talking about the family business in front of Solozzo. There can be no more belly aching or crying to other teams. If Tom wants to bitch to the Giants owners, that’s fine. But the bottom line is that there were not enough wins the last few seasons and a change had to be made.  Just be the crazy grandpa that complains about everything he hates about his family during Thanksgiving dinner, but the minute anyone that doesn’t have Big Blue blood talks shit, he takes them out back and beats them with his hickory stick.

*I take this all back if Coughlin went to Philadelphia to gain intel like when Luca Brasi went to meet with the Tattaglia’s.  #RIP #SpoilerAlert