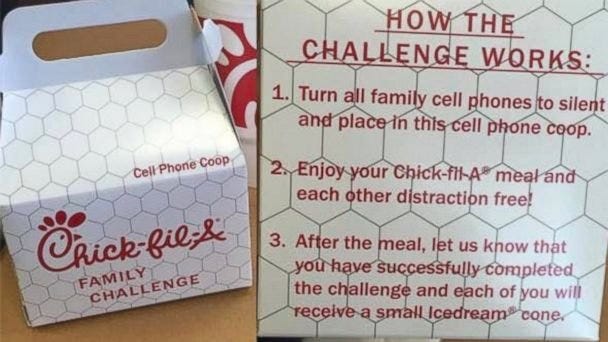 The box, decorated with wire coop, instructs diners to turn their cell phones on silent and place them in the coop. If the phones stay inside the box for the entire meal, diners get a free ice cream dessert.  “It just got me thinking how to get people to disconnect in order to connect and to take a technology timeout,” Williams said of his idea. “Be present where your feet are.” Williams started placing the coops in his two restaurants in mid-January, using a local printer and ideas from Pinterest to design the coops locally. Since then, Williams says more than 10,000 coops have been made and nearly 200 independent Chick-fil-A operators are using the idea in their own restaurants.

Oh Chick-Fil-A, you truly are an enigma wrapped in a riddle.  Your food is great, your restaurants are clean, and your commercials can be entertaining.  Yet you are closed on Sundays, are owned by religious diehards, and pull shit like a no cellphone challenge.  Of course I hate that my iPhone and Twitter have me by the short hairs, but that’s just how addiction works.  At least I’m not sticking needles in my arm or stopping at the liquor store before, during, and after work to knock back a few nips.

But now if I want to hit up Chick-Fil-A, I definitely have to give up my phone.  My wife already asks for cellphone free meals, which is basically impossible.  I am like Tyrone Biggums just itching a scratch that does not exist.  The entire meal I’ll just be staring at that box wondering what news is breaking or who is getting a Jordan crying face Photoshopped onto them.  Maybe Kanye is going on another ridiculous rant.  Maybe a new Bartolo picture has hit the Internet.  Maybe Godzingis followed me (okay, probably not).  And I have no way of knowing as I try to enjoy my spicy chicken with Chick-Fil-A sauce.  Way to ruin a great thing, Chick-Fil-A.  Eating while looking at your phone is nirvana during the 21st century, whether you are with family, friends, or complete strangers.

And hanging an ice cream in front of my face (since a carrot obviously wouldn’t work) is some diabolical shit.  I’d rather have Marsellus Wallace’s boy go to work on me with a pair of pliers and a blowtorch instead of choosing between my phone and an ice cream.

P.S.  I had my first “Go to Chick-Fil-A on a Sunday and not realize they are closed” experience last week.  Devastating isn’t even the word to describe it.