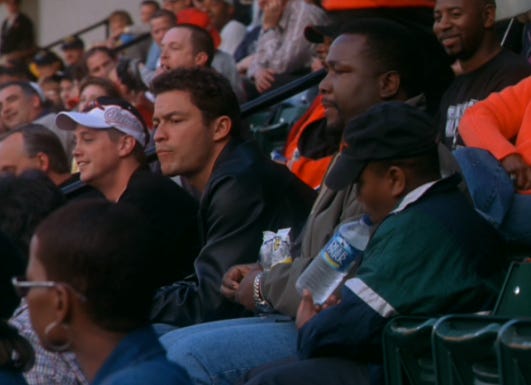 Part 1 of this blog was earlier, you can find that here. But there were too many characters to smash into one blog, so lucky you, we’re double dipping. Part 2 of the list below. 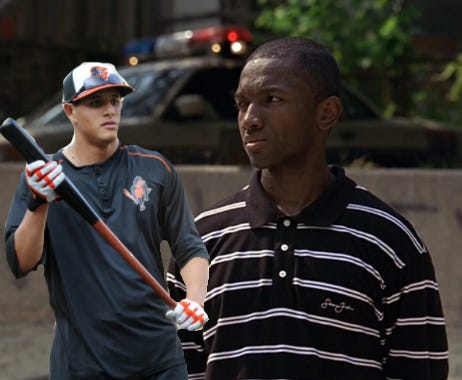 The new dog in town who is ready to run the streets. Doesn’t back down to anybody. Has proved that he can run with the big guys and is ready for the big stage. Just has to keep his head on straight, and he will be one of, if not,the the top guy in the game. Like Marlo, Manny will have people in the streets talking, you won’t want to get into it with him. Talk about a guy who is terrifying to go against, both have ice in their veins and won’t be disrespected, HIS NAME IS HIS NAME. 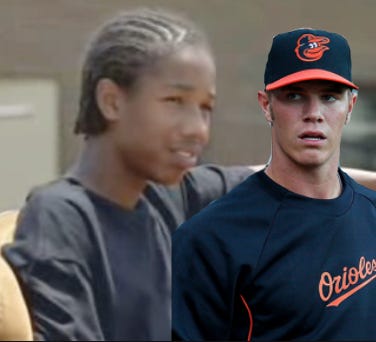 Good friends with Bodie, early on Wallace was looked upon to handle the money in the pit, they wanted to see him improve and promote him, that day never came. He just wasn’t cut out for it. Sucks, because much like Bundy, people LOVED Wallace. Had potential to be a great character, but the street life wasn’t for him. Much like Wallace, everyone loved Bundy coming out of high school, but quickly it was found out that he may not be what we thought he was, and he probably wouldn’t be able to reach his ceiling. But then every time Bundy gets hurt again, I’m over here asking “Why it gotta be like this?” Come Opening Day, you can probably find Orioles fans asking where is he? Huh String, where the fuck is  Bundy? Where is he? Probably just in the bullpen. 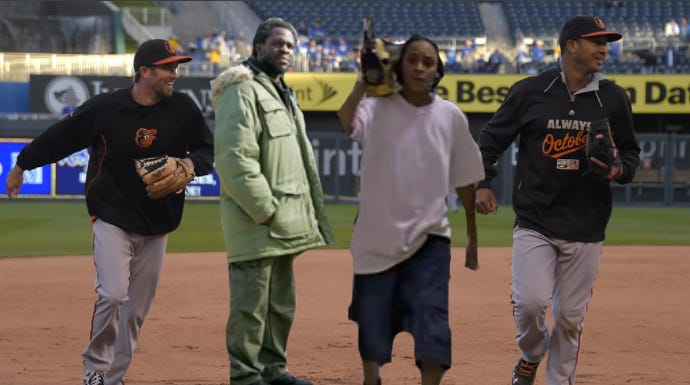 Now Schoop and Hardy aren’t as scary as Snoop and Chris are, but these guys are almost there. Snoop and Partlow know what each other are gonna do before they do it, they know their job, who puts the body in the vacant, who nails the door shut (nail gun scene may be my favorite scene in the show). Schoop and Hardy mirror this, both know where the other will be before and during a play, don’t even have to talk to each other to communicate. They also may be the scariest SS-2B combo in the MLB. Their glove work is second to none, and if Hardy can return to his 2013 or 2014 form, they may be the scariest duo at the plate too. If Schoop keeps developing like he’s on track to, he may be as scary as Snoop. Just have to hope he doesn’t ask Michael how his hair look…..AYYYYYERPPPP 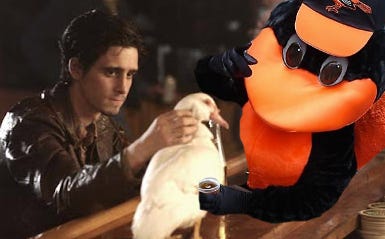 Ziggy was such a damn clown, dude was always taking his junk out, killing his duck, getting Nicky in trouble. He basically was a guy in a bird suit, everyone picked on him, and rightfully so. It’s between him and Johnny for my least favorite character. I’m not saying the Oriole bird is bad, but just like everyone picks on the mascot, everyone picked on Ziggy, until he shot that dude. Enjoy the pen! 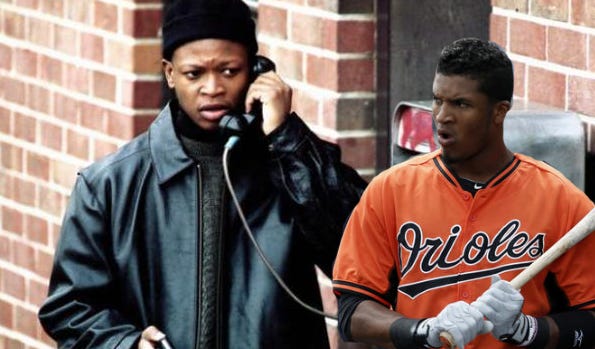 Both of these guys started out hot, Deangelo was outta jail, but had to go back to the pit, but he was the head guy there. Slowly was making his way back to the top, until he talked back to String and that guy got him in the back room at the library. Came on strong with a hot start, much like Jimmy Paredes last season. Paredes did his best to stick with the team, but I think his time is running out, now he’s hurt, so that could buy him some more time, but I think it will be hard for him to make the squad. He could be DFA’d just because it’s a numbers game and there may not be room for him. 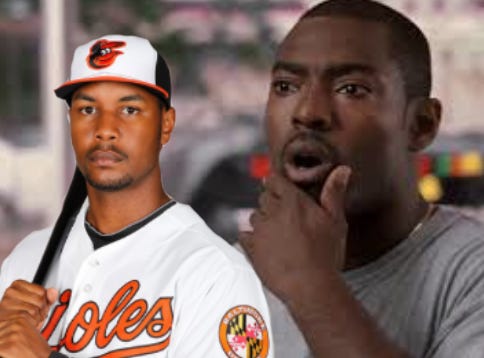 First and foremost, he’s Avon’s Boy. Takes the hits for him, does his dirty work, he looks up to Avon. That is the exact relationship that Hoes and Jones have. If Adam needed some muscle, I’m sure he could count on L.J. to get it done. Wee-Bay started strong, a fan favorite, then got sent away, but returned later on to make sure Namond got in the right hands, always doing what is best for his friends and family, just like I’d imagine L.J. would do. Not one of the major guys, but is a good role player. 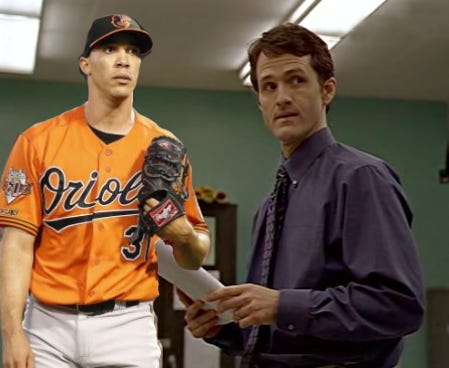 Could these guys have had any worse starts? Prezbo has a quick trigger finger, shoots the wall, and then pistol whips that kid, he also punches his father later on, SMH. Prezbo’s start mirrors Ubaldo’s 2014 year, which was a shit show. Couldnt do anything right, but just when we thought they were a lost cause, they turn it around (a little bit). If Prezbo can turn ito a good teacher and help out the corner boys, why can’t Ubaldo bounce back? 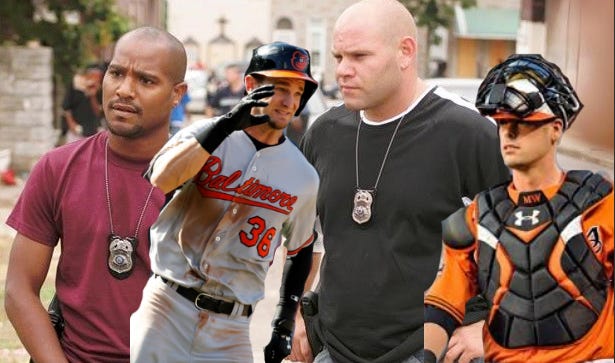 These guys go together like lamb and tunafish. Where you find one, you’ll find the other. They butt heads sometimes, whether it is CaJo starting, or Wiets getting time, or it’s Herc trying to convince Carver he didn’t steal any of the money in the trunk. Regardless, they are good friends and they help each other out to help the team. They bounce idea’s off each other to try to make themselves better as well. Both pairs can offer advice to their partner to help them in their field.  Gotta think the O’s backstops have the same mindset as Carver when he’s chasing these shitbirds around West Baltimore. 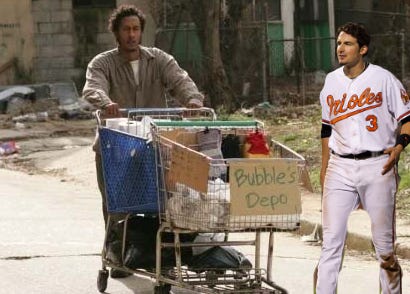 I’ll go on the record and say I don’t think that Flaherty is addicted to heroin, or has “the bug”, but he mirrors Bubbles in so many ways. Everyone is rooting for him to do better, and to hit his peak. You can see it, they both flash some potential. Flats strung together some good games when Manny was out, Bubbles stayed clean in a little bit and was going to his meetings, getting those chips. Some of us have high hopes for them (Flaherty would hit 20 home runs with 550 AB, don’t @ me). These guys also are talented in many ways. Bubbles can fish drugs out of a tire, run Bubbles Depot selling shirts, he also tried to help Sherrod. While Flaherty can play almost every position, both guys are skilled in many different areas. You can see both guys want to get better, and you find yourself rooting for them. You just want to see them finally be able to come up the stairs, out of the basement. 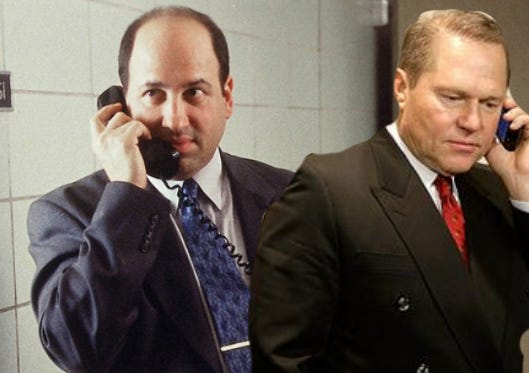 Just a snake through and through. Knew he was doing the wrong thing, being greedy, and did it anyway, why? Well because it was his job, doesn’t change that they are scum. No one liked Levy, no one likes Boras. 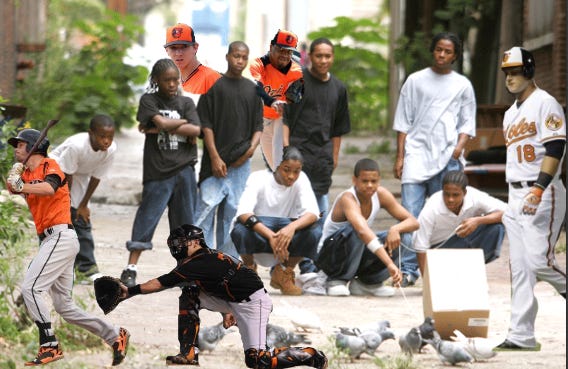 The next kids up. We’ve seen some of what they can do in pressure situations. Namond will probably curse you out, Kenard will pop you when you least expect it, Dukie would be nice to you, but smell like shit, and Michael may just try to intimidate you. These are the guys you have to look out for in the future. Some may make it to the next level, others may fall off and just live a normal life. Wouldn’t be surprised to see some of these guys be the next stars for the Orioles, much like a few of these guys were on their way to the top of the streets.

This wasn’t easy, but I think I did an okay job with the comparisons, tweet me and let me know who you thought was spot on, and who I screwed up on. Feel free to let me know your list too. And if you haven’t seen The Wire, just do yourself a favor and watch it for christ’s sake.