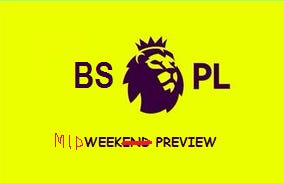 This, as you know, is a safe space for the few, the proud, the openly and closeted soccer-inclined individuals alike who are ballsy or foolhardy enough to visit Barstool’s internet neighborhood. In fact, since we are all gathered here today, this seems like an appropriate time to ask that you bow your heads for a moment in silent prayer for the MLS’s dignity and self-respect, which after being chewed up and swallowed last night in the CONCACAF Champions League is now just a dingleberry dangling precariously off the ass-end of Liga MX. 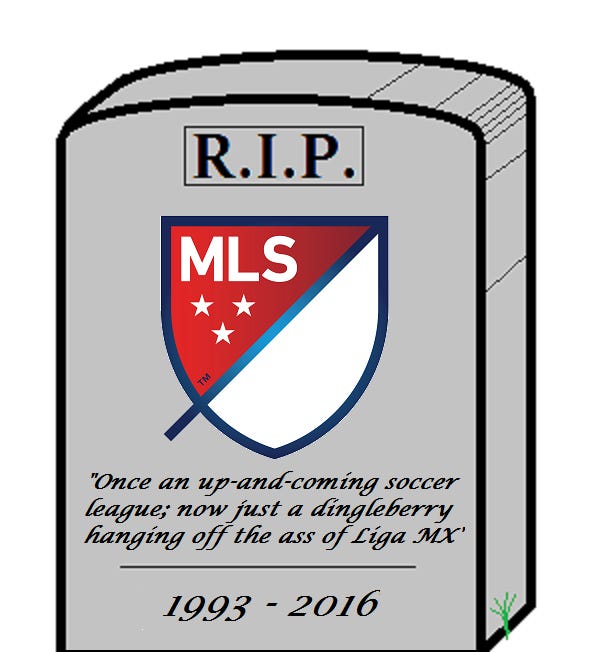 As for yesterday’s EPL action, that was but a small appetizer platter intended to whet your appetite for today’s main course, so let’s get to the eatin’…

Combined scores from yesterday and schedule for today: 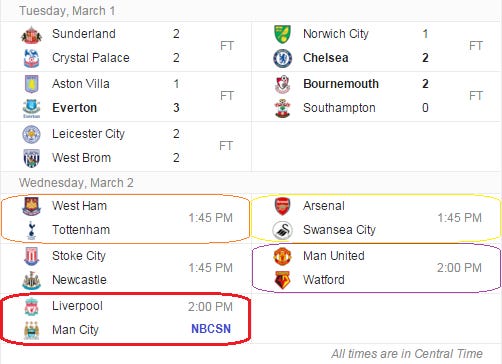 A few quick observations from those results already in the books…

– It was not pretty but Chelsea squeaked out a win overly wee Norwich. Hiddink taking over a club in such dire straits and going (almost) undefeated for multiple months is something that is probably not being talked about enough. 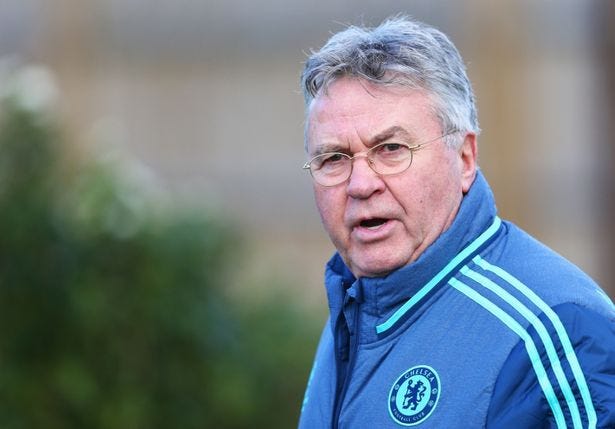 – A POINT FOR PALACE! Um, congrats?

– Southampton took a nice watery shit on my lock of the day. Gonna have to have a little discussion with my bookie for listing them as the home team in that game, but even so that was a disappointing performance for a club that should have been extra motivated after coughing up a late lead to Chelski at the weekend. Kudos to Bournemouth for a solid effort though. Youge three points for the Cherries.

– Aston Villa is basically a herpes sore at this point. Just go away already.

– Leicester going down early, then taking the lead but eventually coughing it up is quintessential Leicester only in the sense that precisely zero persons would have predicted that is how that game would go (though at least one idiot got RACH off the result)

Heading into today’s games, this is a live look at the table: 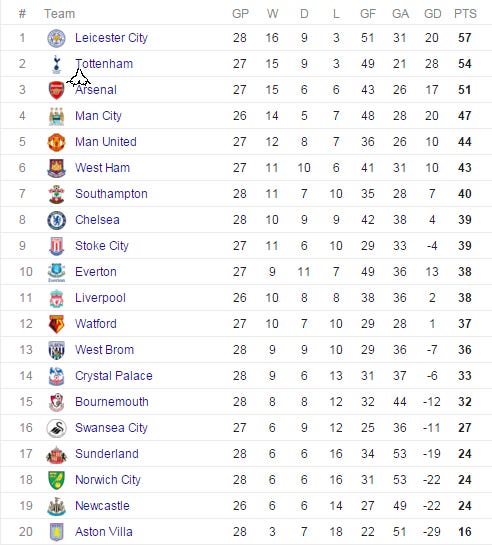 [TODAY’S] PICKS OF THE (MID)WEEK

Two games with important title implications and NBCSN decides to show Liverpool versus City. I’m not mad, just a little disappointed (for those of you who don’t work from home and/or have access to Premier League Extra Time).

As for this game, these words have rarely been spoke before, but the absence of Lucas Leiva – essentially a rich man’s Claudio Yacob or poor man’s Jonjo Shelvey, depending on your perspective – could prove to be a crucial miss for Liverpool in this one. He was tasked with slowing Sergio Aguero in the League Cup final and did a remarkably adequate job… in part thanks to Raheem Sterling’s suckiness, of course, but still one of the most surprising storylines from that game on Sunday. Leiva’s injury status means that stopping the less-rich-man’s Maradona will be up to the newly returned (and likely rusty) Dejan Lovren, which I would say is not a very good situation for the Reds.

On the other hand, the Sky Blues may be missing Yaya Toure, and as solid as the combination of Fernando and Fernandinho are defensively they just aren’t all that scary offensively, which should give Henderson, Lallana and Coutinho more space and license to go forward. I’m a bit torn on this because Liverpool is not a bottom half club with Daniel Sturridge on the field, but he is at best 50/50 for this game after cramping up too badly to take a penalty on Sunday (WEEE-yooo, WEEEE-yooo, Waaaaaaaaambulance Alert). As it is I’m going to assume Sturridge sees limited minutes and City pulls out a 2-1 win.

Anybody who watched the West Ham versus Sunderland game on Saturday morning recognizes that the Bubble Boys easily could have lost that game but for the Black Cats disgusting finishing, in the end eking out 1-0 win. Spurs were not overly impressive themselves in pulling out a victory over Swansea, but then again that could have finished 4-1 rather than just 2-1.

Put simply, Spurs should win this game. They are bigger, stronger, faster and have larger phalluses. There are two things standing in the way: the first is a long, long, long, long history of playing like shit when it actually counts – and there can be no doubt that today’s game, with the possibility of Spurs going to the top of the table with a win, is pretty damn big. The second is the likelihood that some players may have at least one eye on Saturday’s North London Dærby. What’s more, Tottenham’s last six EPL matches have been: W-W-W-W-W-W, meaning my dearly beloveds are definitely due for a massive bed-wetting. Settling for a draw would not shock me, but with how poorly the Hammers looked at the weekend I just gotta go with the old gut and say they will find their own way to bungle this one. Tottenham to win 3-1. 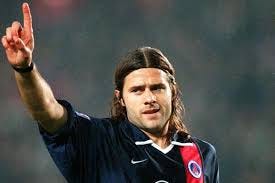 • Arsenal [-325] is also at risk of being distracted by Saturday’s massive, massssssssive game, and they have shown a very Spursy tendency to come up small in big moments this season. The performance on Sunday against United’s B-squad is mind-bottling. Will they at least pretend to have testicles today against Swansea [+950]. Unfortunately, I believe the answer is yes. Arsenal to win 3-0. 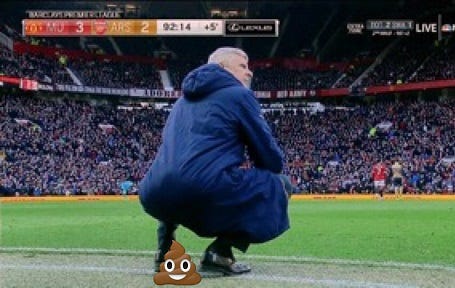 • United [-185] are fresh off their biggest win of the season and, what’s more, are welcoming guys like Anthony Martial and Chris Smalling back from the injury list. It’s gonna be a tough slog for Watford [+550], but I can’t help but like the Hornets to at least take a point in this one. Call it mother’s intuition, but despite the recent inexplicable win over Derpsenal, the Red Devils have not magically metamorphosized itself into a really good soccer team overnight. Gimme a 1-1 draw, and all the tiresome “LVG OUT” chatter to start back up.

I’ll be back on Friday with your regularly scheduled weekend preview. Don’t miss me too hard.